Never too young for the stock market

MANILA, Philipipines — Mariah Manaois of Paniqui, Tarlac, has been saving up money from Christmas “aguinaldo,” school allowance and the occasional reselling of novelty items to classmates since she was in Grade 1. Only 14 and a 10th grader, Mariah has become a new investor in the local stock market.

Mariah’s father, 37-year-old musician and entrepreneur Fidelito Manaois Jr., matched her savings and recently opened an online stock trading account, with the goal of building up her college fund. He bought shares of a new grocery store chain at its initial public offering (IPO) for P100,000, the maximum amount allowed for small investors under the electronic allocation system for IPOs of the Philippine Stock Exchange (PSE).

“It was a mutual decision between me and my wife that now is the right time to invest in stock market because it’s recession (to find shares at bargain prices) and also for diversification of funds,” said Manaois, who previously kept assets mostly in the form of real estate and cash. 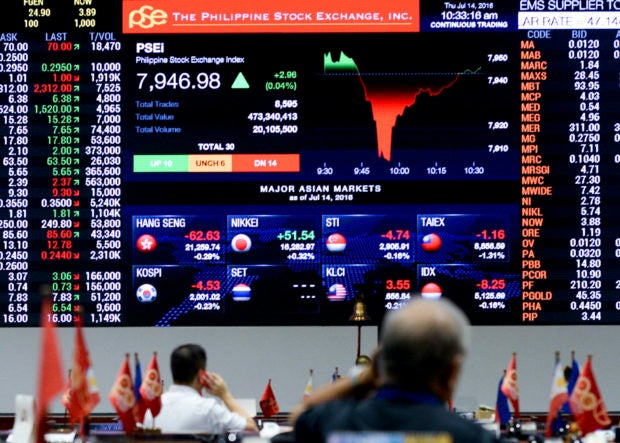 ENABLED ONLINE Based on the latest Philippine Stock Exchange data, the young and the not-so-wealthy are embracing stocks as an investment option, aided by an increasing number of stock brokerage houses offering online trading platforms.

Based on the latest PSE data, the young and the not-so-wealthy are embracing stocks as an investment option, aided by an increasing number of stock brokerage houses offering online trading platforms.

Total PSE stock market accounts reached around 1.23 million at end-2019, up by 12.7 percent from 1.089 million accounts in the previous year. This is equivalent to about 1.1 percent of the country’s population, although some retail investors may have multiple accounts with different brokers.

Investors age 18 to 44 years old held 67.2 percent of these accounts. In terms of income segment, those earning about P42,000 per month or about P500,000 a year comprised 59.4 percent of the total number of investors. Most of them are based in Metro Manila.

The number of online accounts grew by 25 percent to 782,118 last year. They now represent 63.7 percent of total accounts.

After classifying investors into four age groups, the PSE reported that those between 30 to 44 years old held the biggest number of accounts—45.5 percent of the total—while 18- to 29-year-olds accounted for 21.7 percent.

Only 20.3 percent of the accounts in the stock market were owned by investors between the age of 45 and 59 years old, while 12.5 percent were held by those who are at least 60 years old.

Equity investing is typically seen as a suitable investment option for young people who can afford to take on risk assets for the longer term. Compared to traditional deposits and bonds, stocks offer greater reward in terms of upside in exchange for greater risk.

Kyle Matthew Chan Chua, 23, a technical trainer at Amazon Web Services, started trading back when he was a fourth year student at the De La Salle University (DLSU).

“I was for looking for another stream of income,” Chua said, adding that he then had “a very small capital to dip my toes and learn the tricks of the trade in the stock market.”

“During my college days when it was a bull market, I was an active daily trader, buying mostly speculative stocks because these yielded the highest gains in the shortest time. Now, because of the demands of my job and the market crashing due to the pandemic, I shifted my attention to buying and holding blue chips and second-liners,” he said.

Gedrite Agustin, 22, DevOps (software development and IT operations) engineer at Globe Telecom, started trading when he was a college sophomore also at DLSU. He still trades actively these days.

“I’m really interested in how free markets operate, specifically the supply and demand side of it. From what I understood back then, it was the epitome of capitalism. It was one big experiment for me,” Agustin said.

Agustin recalled that during the good years of 2017 and 2018, he mostly traded speculative stocks.

“When it’s a bad year like what we have right now, I go on the defensive, buying blue chip stocks instead of speculative stocks, being satisfied with 5 to 10 percent gains as during these times, cash is king,” he said.

While investors with an annual income of less than P500,000 had the biggest share in total accounts at 59.4 percent, their share declined from 62.4 percent in 2018.

“Online accounts have been the reason for the steady rise in total stock market accounts in the last 10 years,” said Ramon Monzon, PSE president and chief executive officer.

“The shift in trading format preference of investors have encouraged stock brokerage companies that cater to retail investors to start offering online trading services to their clients,” Monzon said.

The gender gap in the market had also narrowed, with the male investors owning 50.2 percent and females owning 49.8 percent of total retail accounts.

In 2018, female investors accounted for 48.4 percent of total market accounts.

The share of overseas investors to total account dropped to 1.8 percent in 2019 from 3 percent in 2018 even as offshore investors typically dominate in terms of value of trades. The top five countries with the most number of retail investors in 2019 were the United Arab Emirates, Japan, United States of America, China and Singapore.

“We hope to see an increase in investors based in the provinces and overseas in the coming months especially as more online stockbrokerage firms validate client applications through videoconferencing platforms, eliminating the need for a face-to-face KYC (know-your-customer) procedure,” Monzon said.

“Even before the pandemic, we have seen a growing middle class. Even with this pandemic, there are still people who have the money to buy into the stock market, especially with investor education now gaining ground,” said said fund manager Astro del Castillo, managing director at First Grade Finance.

“Given the low interest rate and with most of them working from home, there’s an appetite for alternative income and they see the stock market as a way of creating more value for the money despite the risks,” he said.

Only President Duterte can curse – Roque