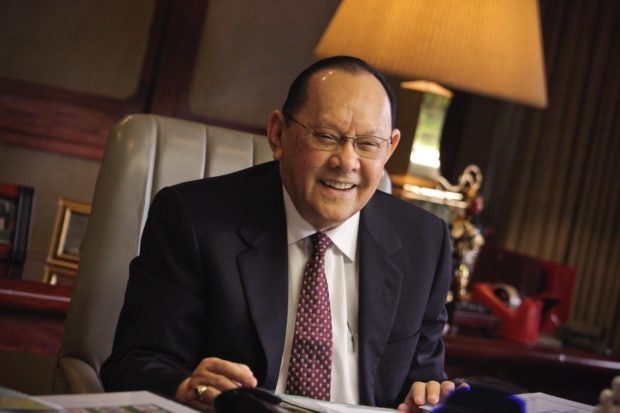 The business community mourned the passing of business tycoon Eduardo “Danding” Cojuangco Jr. (ECJ), long-time chair of storied conglomerate San Miguel Corp., sports patron, philanthropist, kingmaker and at one point, a candidate to be the CEO of the land.

Since regaining control of San Miguel in 1998 – having returned to the Philippines from a self-imposed exile following the ouster of his long-time friend, Ferdinand Marcos – Cojuangco endured several attempts by the Presidential Commission on Good Government (PCGG) to unseat him from the conglomerate.

SMC eventually embarked on a capital restructuring that converted the government’s stake into non-voting preferred shares, which the group bought back, thereby insulating SMC from any future political headwinds.

Long before Cojuangco’s passing, he had handed over the reins of San Miguel to his favored successor, Ramon S. Ang, a self-made businessman who managed and grew the assets that Cojuangco left in the country after the 1986 EDSA Revolution.

Ang, whom Cojuangco loved like his own son, bought the latter’s controlling stake in San Miguel in 2012. Cojuangco stayed as chair for the remainder of his life. This succession planning was similar to some American tycoons’ practice of leaving the companies they founded to the hands of chosen successors while reserving cash inheritance to their heirs. The leadership succession in San Miguel was thus an outlier in the Philippine setting, where corporate succession is typically determined by bloodline.

“For the memories and all that you taught me, I will always remember you and keep you present. Thank you for always having my back, Boss ECJ,” Ang said.

“For decades, ECJ guided the San Miguel Group, making a difference in the lives of so many of our employees, past and present. Values he lived by–malasakit (empathy), and sama-sama (collective effort), the idea that we either make it together or not at all—are at the heart of what it means to be San Miguel,” SMC said in a press statement on Wednesday.

“His contributions to our company’s history are numerous and indelible. An agriculturalist at heart, he championed the development of rural Philippines and the setting up of our agro-industrial operations.”

SMC cited Cojuangco’s role in guiding the groups’ expansion, diversification, and transformation. From its traditional businesses of food and beverage production, SMC is now also into infrastructure, power generation, oil refining, banking and property development businesses. It has also expanded its footprint across the region under the leadership of Cojuangco and Ang.

“His vision for San Miguel—to be a beacon of hope for the Philippines and a partner in nation-building—remains at the core of everything we do,” SMC said. “His impact on many other areas of Philippine life—sports, philanthropy—add to his rich and enduring legacy.”

Philippine Stock Exchange (PSE) chair Jose Pardo, a long-time friend and a former Trade and Finance Secretary during the Estrada regime, said: “Though it may be an understatement, but in Danding, one finds true grit ….and in him, is a passion to make a towering difference in every little thing he does.”

Pardo said that thanks to Cojuangco’s partnership with Ramon S. Ang, San Miguel had become a conglomerate with a “weakness for philanthropy.”

“More meaningfully, ECJ left us with a legacy of a life well-lived and shared. His valuable principles on trust, hard work, generosity, humility, and love of country shall always serve as an inspiration for generations to come,” Pardo said.

“It’s truly sad but this country is today one less of a great business leader and a patriot!”

Across various companies under SMC, Cojuangco was a well-loved boss and colleague to fellow business leaders. “He will be deeply missed. The true mark of a leader is how he treats his people and how inspires them. That’s ECJ,” said Reynaldo David, former president of state-owned Development Bank of the Philippines and an incumbent board member at SMC’s oil refining arm, Petron Corp.