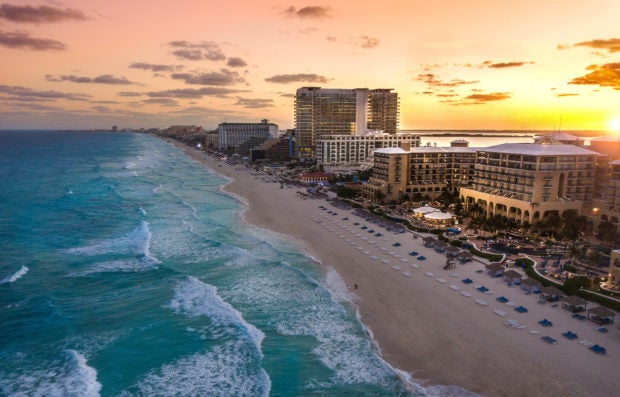 Mexico’s Caribbean coast resorts of Cancun and the Riviera Maya have welcomed their first tourists, after more than two months when almost all the hotels were shut.

But the few dozen tourists who showed up Monday at the 41 hotels that have partly reopened are a mere symbolic trickle compared to the 23 milllion that crowded the coast last year, bringing about $15 billion to the local economy.

It’s a slow start; hotels will only be allowed to reach 30% of their capacity to avoid crowding. More capacity will be allowed later with some hotels hoping to reach 50% of capacity in July. Before the pandemic, occupancy rates of 85% were not uncommon.

Gibran Chapur, the vice president of the Palace resort chain, said his company welcomed about 300 tourists on the first day, 70% of them from the United States.

Hundreds of employees formed human welcoming chains at the Moon Palace resort south of Cancun as the first tourists drove up to the lobby, where they were welcomed with mariachis. Chapur said the Palace resorts were already receiving a lot of reservations for July and November, and that many were eager to get out of lockdown and enjoy the outside world again.

“We have to activate the economy, but putting people’s health first in order to save lives,” said Carlos Joaquin, the governor of Quintana Roo state, where Cancun is located.

Tourism accounts for about 50% of all economic activity in the state, which has a total of about 107,000 hotel rooms. To date, the state has had about 2,235 coronavirus cases and 427 deaths. But the worst of the local outbreak appears to be over, and Cancun is one of the parts of the country where reopening has been authorized.

Chapur said some things will change due to the virus, like disinfecting all luggage and shoes; buffets and paper menus at the resorts’ restaurants are probably a thing of the past. RGA