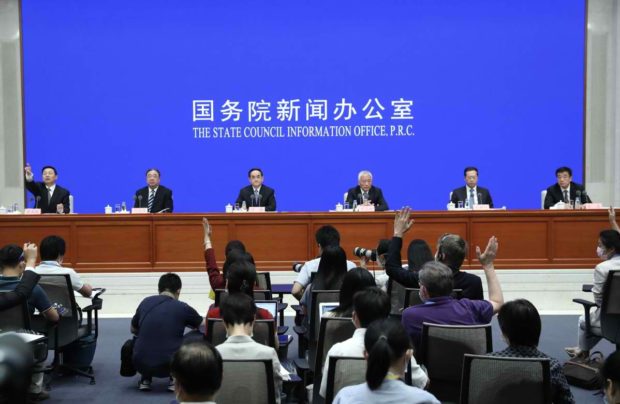 An official selects a journalist to ask a question at the news conference to release the white paper “Fighting COVID-19: China in Action” in Beijing on Sunday. China Daily/Asia News Network/ZOU HONG

BEIJING — China will fulfill its commitment to assist developing countries in the fight against COVID-19 and work with the international community to resume personnel exchanges to mitigate its negative impact on social and economic development, a senior official said on Sunday.

Vice-Foreign Minister Ma Zhaoxu said at a news conference in Beijing that China has announced the suspension of debt repayments for 77 developing countries and regions with the implementation of the G20’s Debt Service Suspension Initiative for the world’s poorest countries.

The establishment of a cooperation mechanism for Chinese hospitals to pair up with 30 African hospitals is also underway, Ma said, adding that the construction of a United Nations humanitarian hub in China is under discussion and preparation.

In a speech at a virtual event opening the 73rd session of the World Health Assembly last month, President Xi Jinping announced China will provide $2 billion over two years to help with COVID-19 response and with economic and social development in affected countries.

Ma explained that through bilateral aid and multilateral donations, the funds will be used to provide anti-epidemic materials as well as support the resumption of economic and social development in related countries in the post-epidemic era.

At the news conference, the State Council Information Office unveiled a white paper titled “Fighting COVID-19: China in Action”, which records China’s efforts in its fight against the virus, shares its experience with the rest of the world and clarifies its outlook on the global battle.

According to the white paper, China had provided anti-epidemic assistance to more than 150 countries and four international organizations and had sent 29 medical experts groups to 27 countries as of May 31.

Local governments, enterprises, civil organizations and individuals have donated medical supplies to more than 150 countries and regions as well as international organizations, it said.

From March 1 to May 31, China exported anti-epidemic materials to 200 countries and regions, including 70.6 billion face masks and 340 million items of protective clothing as well as other supplies, it added.

According to Ma, China has held over 180 videoconferences with experts from more than 170 countries and international organizations.

All these facts demonstrated China’s sense of responsibility as a major country, Ma said, adding that China has advanced its cooperation with other countries and boosted its relations with most of them during the pandemic.

He noted that China is strengthening cooperation with various countries to restart personnel exchanges in a gradual and orderly manner, to promote resumption of work and production and to maintain the stability of international industrial and supply chains.

China has established fast-track lane services for personnel exchanges with the Republic of Korea, Germany and Singapore, he said.

While ensuring the containment of the pandemic, China will discuss with other countries the establishment of fast lanes for people to come to China who are engaged in important business, logistics, production and technical services, he added.

In terms of stigmatization of China, Ma said that “while certain countries defame China as well as create and spread a political virus with every conceivable means to shed their own responsibilities, China must firmly fight back against the shifting of blame”.

Xu Lin, vice-minister of the Publicity Department of the Communist Party of China Central Committee and minister of the State Council Information Office, also rejected accusations that the Chinese media made false reports on COVID-19 in disregard of the facts.

China’s media has no intention of fighting the so-called “information war” but will discern right from wrong and restore the truth in the face of rumors and slander against China, he said.

Some foreign politicians and media have claimed China is the source of the virus and tried to politicize the COVID-19 pandemic. They played up the presumptions that China was accountable for spreading the virus and concealing the facts, which have no factual basis and disrespect science, Xu said.

Faced with such slander against China, the Chinese media must and will respond, not by playing around with words, but by clarifying the facts, restoring the truth and maintaining morality and ethics, he added.