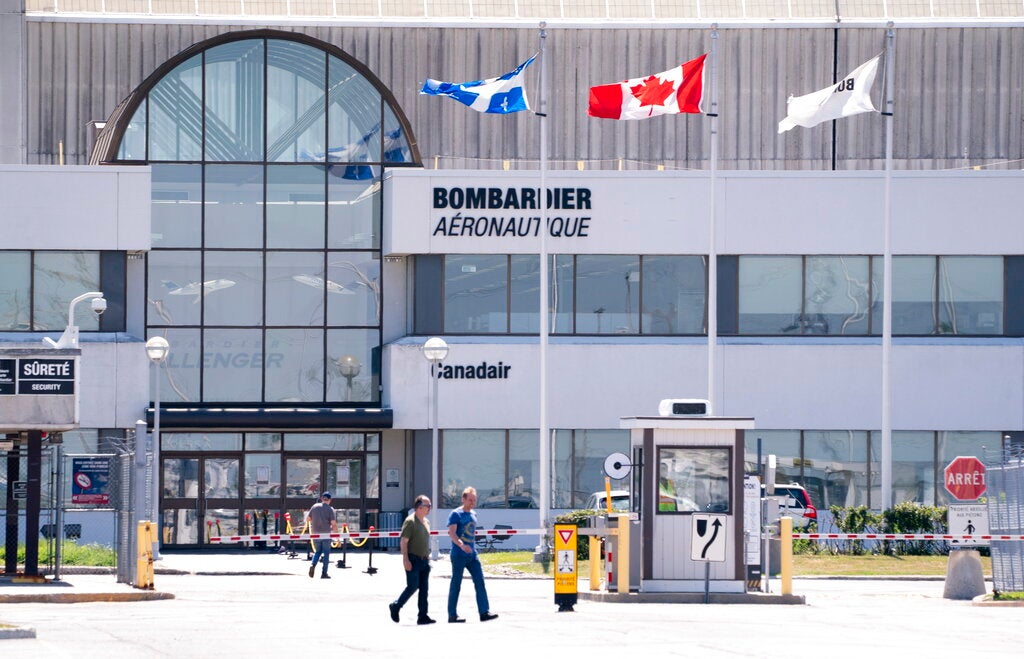 A Bombardier plant is seen in Montreal on Friday. Bombardier Aviation is reducing its workforce by about 2,500 employees due to challenges caused by COVID-19. (The Canadian Press via AP)

The outbreak of the coronavirus has dealt a shock to the global economy with unprecedented speed. Following are developments Friday related to the national and global response, the work place and the spread of the virus.

— Mall operator CBL & Associates warned Friday in a regulatory filing that there’s “substantial doubt” that it will be able to continue as a going concern, citing the financial impact of the coronavirus on its store tenants. The warning comes after it skipped an interest payment of $11.8 million that was due June 1. It has a 30-day grace period before it goes into default. CBL has 108 mall properties across 26 states.

— Bombardier Aviation is reducing its workforce by about 2,500 employees due to challenges caused by COVID-19. The company said Friday that it had to make the move because business jet deliveries, industry-wide, are forecast to be down approximately 30% year-over-year due to the pandemic.

Bombardier said most of the cuts will impact its manufacturing operations in Canada and will occur throughout the year. It has almost 60,000 total employees. The company anticipates an approximately $40 million charge related to the job cuts.

— Luxury British carmaker Bentley plans to cut up to 1,000 jobs and has warned of the possibility of more to come as it tries to limit the damage caused by the virus outbreak.

The company, which is part of Germany’s Volkswagen Group, said it is looking to make the initial job cuts under a voluntary scheme but that future job cuts may be on a compulsory basis.

Bentley said it has informed its 4,200 workers of a program to significantly reduce the size of the business.

— British Airways is considering legal action against the British government’s plans to force anyone arriving into the country to quarantine themselves for 14 days in order to stem the spread of the coronavirus.

Willie Walsh, the chief executive of International Airlines Group, which runs the British flag carrier, told Sky News he is reviewing the situation with lawyers. He said the “irrational” quarantine rules would “torpedo” the airline’s chances of flying in July.

— The International Monetary Fund said Friday it has reached an agreement with authorities in Egypt to allocate $5.2 billion to help the country cope with the economic fallout of the coronavirus outbreak.

The agreement, which must go to the executive board for final approval, comes on top of a $2.77 billion IMF loan approved to Egypt last month.

— Louisiana’s bars, spas and tattoo shops can begin restarting operations nearly three months after they were closed because of the coronavirus.

The state continued to loosen its virus-related restrictions Friday. The changes allow retailers, restaurants, salons and churches to serve more customers at a time and let other shuttered businesses reopen with limitations.

— The unemployment level in the Czech Republic has been moderately growing amid the pandemic.

Analysts have predicted that the unemployment level might reach up to 10% later in the year.

— Malaysia’s government has announced a 35 billion ringgit ($8.2 billion) stimulus to bolster short-term economic recovery. The package, which is in addition to a $60 billion stimulus announced earlier, centers on increasing employment, wooing foreign investment and revitalizing key sectors of the economy.

— Statistics Canada reports a record high unemployment rate as the Canadian economy added 289,600 jobs in May, with businesses reopening amid easing public health restrictions. The government agency says the unemployment rate rose to 13.7%, topping the previous high of 13.1 % in December 1982.

The increase in the unemployment rate came as more people started looking for work. The increase in the number of jobs comes after three million jobs were lost over March and April, and about 2.5 million more had their hours slashed.

Stocks surged higher Friday after a much better-than-expected report on the U.S. job market gave Wall Street’s recent rally another shot of adrenaline.