Emelda Razon Aguillon, a massage therapist from Quezon City, lost her main source of income when the spa she had worked for suspended operations during the enhanced community quarantine (ECQ) in Metro Manila due to the COVID-19 pandemic.

She told the Inquirer on Friday she received a P600 weekly allowance from her employer during the lockdown until mid-May when the owner decided to shut down the spa.

The business sustained losses and could not resume operations because of physical distancing guidelines, Aguillon said in a phone interview.

Spas and similar establishments involving close person-to-person interactions are among the last that will be allowed to reopen to contain the coronavirus contagion.

Using her allowance, the 39-year-old mother of two, turned to selling home-cooked meals as her husband, a janitor, was able to work only twice a week during the lockdown.

Joana Marie Padasa, a 30-year-old call center agent from Makati, was laid off by her company a month after the ECQ was imposed.

At the beginning of the lockdown, she worked from home while her company started cost-cutting and laying off other employees. But in mid-April, she, too, was let go along with almost half of the company’s employees.

Without any other source of income, she had to cut her daily expenses to be able to pay rent and buy her daily needs.

“When you have a job, at least you are secure. But when you are unemployed, you really have to reduce your expenses because there is no assurance when this pandemic will be over,” she said.

Padasa said her company might rehire her and her former coworkers after the quarantine, but they were not given any assurance so she started looking for a new job.

However, she was having a hard time because most companies were looking for someone who can drive to work or had the gadgets for a work-from-home scheme. 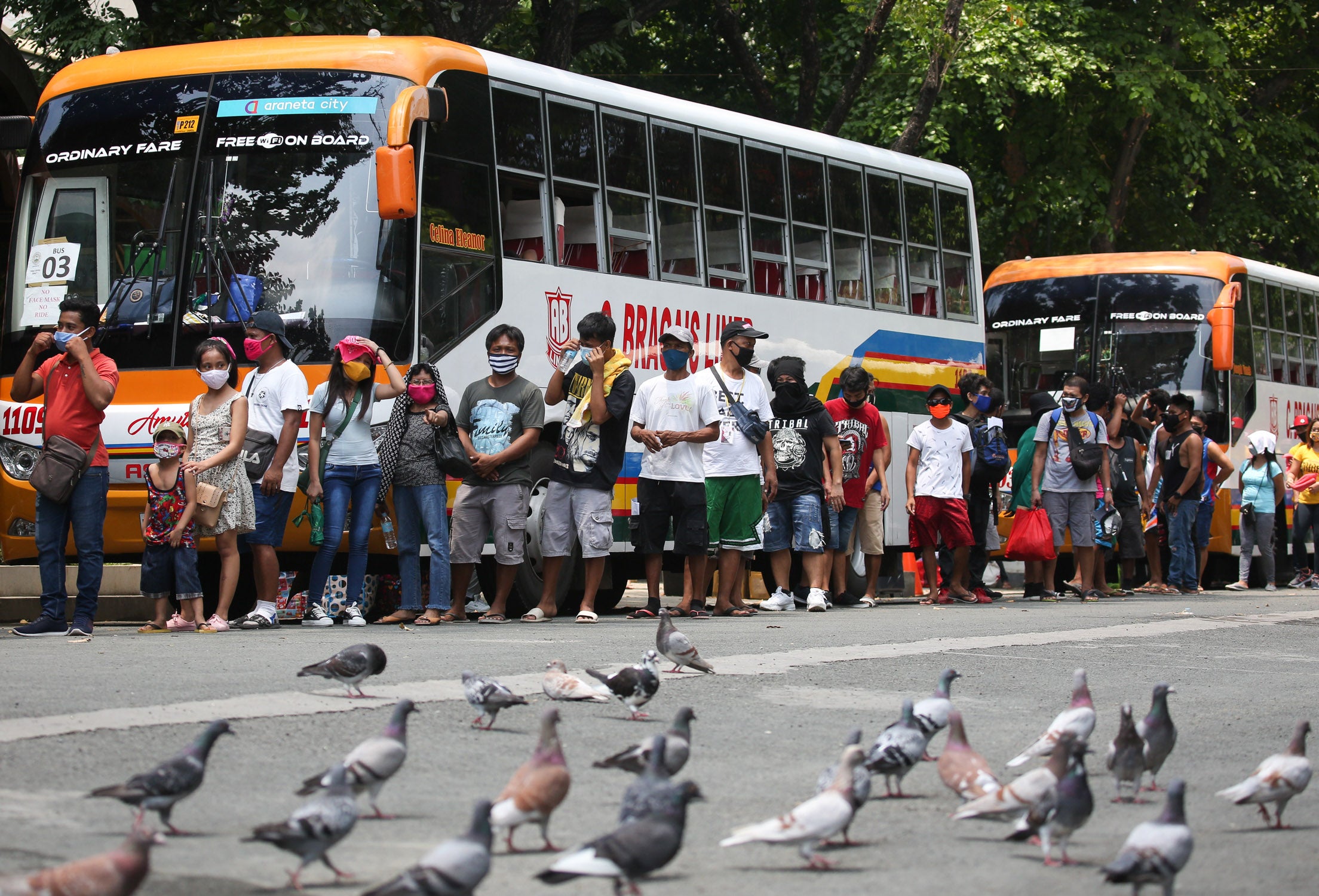 WHERE THERE’S WORK, HOPEFULLY The government’s “Balik Probinsya” program seeks to help Metro Manila residents who were rendered jobless by the economic slowdown caused by the coronavirus pandemic and who now wish to start life anew in their home provinces. Some of the beneficiaries line up outside Baclaran church in Parañaque City on Friday to wait for the bus taking them to the Bicol region. —LYN RILLON

Aguillon and Padasa are among the 4.9 million Filipinos who lost their jobs in April, according to the Philippine Statistics Authority (PSA).

The PSA said that month saw joblessness climb to its highest rate—17.7 percent—after the engines of the economy had to stop amid one of the strictest COVID-19 lockdowns in Southeast Asia, and putting at risk recent big gains in reducing poverty incidence.

Citing the preliminary results of the PSA’s labor force survey, National Statistician Claire Dennis Mapa on Friday said 7.3 million were unemployed in April, jumping from 2.3 million a year ago and 2.4 million in January

It was the highest unemployment rate since April 2005, when the government changed its methodology in measuring employment. Using a different methodology, government records showed the last time that the jobless rate was double-digit was nearly 30 years ago—during the second quarter of 1991, Mapa said.

The decline in employment rate to 82.3 percent in April from 94.9 percent a year ago and 94.7 percent a quarter ago translated into an 8-million drop in the number of Filipinos with jobs to 33.8 million from 41.8 million last year. In January, 42.7 million Filipinos were employed.

The average working hours also were cut short to 35 from 41.8 in April last year.

The percentage of persons not at work was estimated to be 38.4 percent in April, a high jump from 1.1 percent in the same month last year as many worked from home or had to temporarily stop working amid physical distancing restrictions during the ECQ.

He said the vast majority, or 97.1 percent, of the employed in April, who were not at work that month, blamed the ECQ.

The underemployment rate also rose. It was 18.9 percent in April from 13.4 percent a year ago, increasing the number of people looking for better jobs or more working hours by 781,000 to 6.4 million from 5.6 million last year.

The labor force declined to 41 million from 44 million a year ago, while the participation rate also dropped to 55.6 percent—the lowest since 1987, Mapa said.

He explained that young workers age 15-24 likely delayed looking for jobs during the ECQ.

The labor force, both employed and unemployed, is composed of those 15 years old and above.

Per region, the highest unemployment rate of 29.8 percent was recorded in the Bangsamoro Autonomous Region in Muslim Mindanao, but all other regions recorded double-digit jobless rates.

For the country’s chief economist, the drop in employment was a result of a “prudent” decision to protect the people’s health amid the pandemic.

“Let us remember that we made the difficult decision to implement the ECQ because we resolved to save lives and prioritize the health of our fellow Filipinos, including our family and friends,” Acting Socioeconomic Planning Secretary Karl Kendrick Chua told an online press conference.

“The economic cost of the quarantines, that buy us time to prepare the health sector to contain the spread of COVID-19, is expectedly large. This is why the government has provided and continues to develop measures to enable our health sector to address the pandemic and to help the people and the economy recover and adapt to a new and hopefully better normal,” said Chua, head of the National Economic and Development Authority.

As the Philippines moves to a “new normal,” Chua said some of the key programs that could further protect the people are unemployment insurance or savings account; pension portability; digital delivery of all social protection programs and subsidies through the national ID; and active labor market programs, job matching, and skills upgrading through the Technical Education and Skills Development Authority.

Chua said the government expected poverty to “go up” this year, although only temporarily.

Malacañang was “saddened albeit unsurprised” by the joblessness report.

In a statement, presidential spokesperson Harry Roque expressed confidence that the Philippines was on its way to recovery as the government drafted recovery and resiliency programs.

“Our nation is composed of resilient and hardworking people and we will stand united to weather this health crisis, and together, we will heal and recover as one,” he said. —WITH A REPORT FROM JULIE M. AURELIO AND INQUIRER RESEARCH