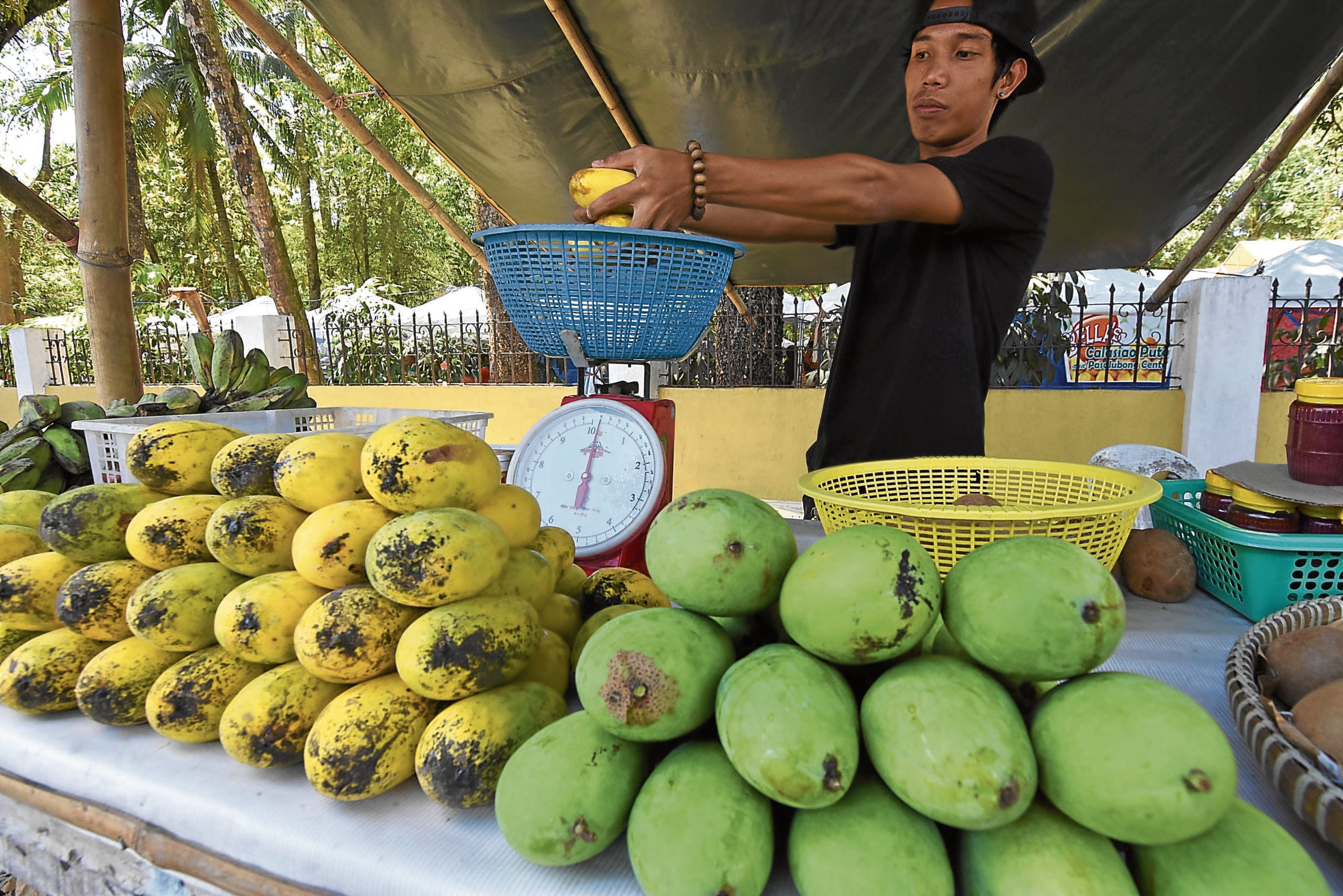 Mangoes are sold at a roadside “talipapa” in Sta. Barbara town in Pangasinan province.

DAGUPAN CITY—Before pa­nic over the new coronavirus disease (COVID-19) gripped the country, mobile workers in the mango industry could hop from one town to another armed with fruit-inducing chemicals, pesticides, sprayers, ladders and bundles of old newspapers.

That was no longer possible for mango-growing contractors and their workers when border villages established checkpoints during the Luzon quarantine to contain the spread of the virus, said Rosendo So, president of the Samahan ng Industriya ng Agrikultura.

So, who owns a mango farm in Villasis town, said village officials refused entry to mango growers, and suggested hiring residents to do the work instead.

“But mango growers have certain skills that they developed through the years. You just can’t hire anyone to spray or bag the fruits up in the tree or even harvest them using tall ladders,” So said.

They are also efficient at sorting the harvest. “Inspecting or weighing each fruit by unskilled or newly hired laborers would take much time,” he said.

The pandemic led to the Luzon lockdown in March, which was the peak harvesting month of trees that flowered in December. 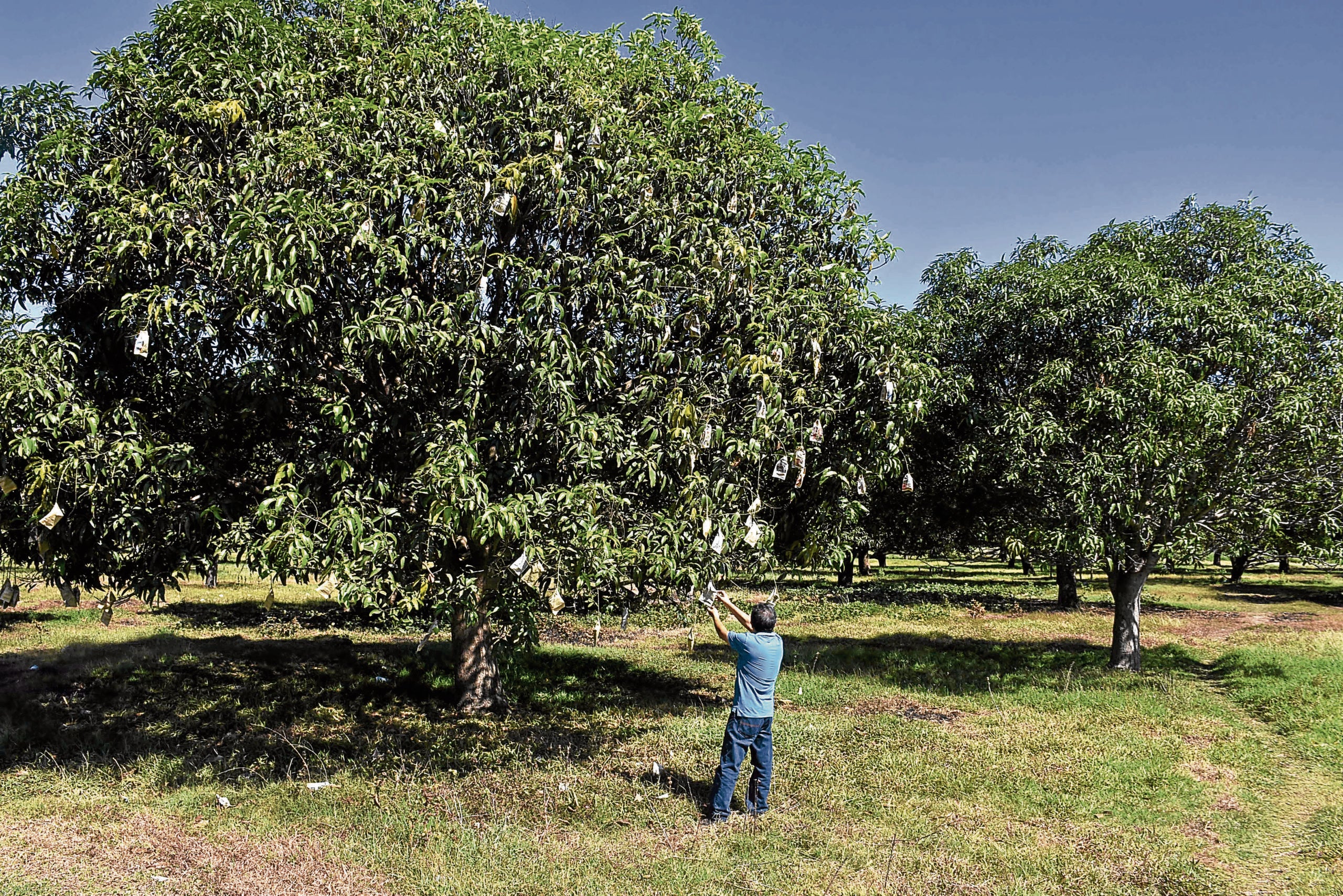 Some fruits were not harvested when the quarantine required everyone to stay indoors, said Bert Domalanta, 66, a mango contractor hired by mango farms in Pangasinan and other provinces.

A mango contractor pays “rent” for each tree and shoulders all expenses for each frui­ting season, such as flower-inducing chemicals, pesticides and labor. The rent is between P100,000 and P120,000 for each tree, according to Domalanta.

Mango fruits are then harvested when they are 110-112 days old. But some farms, including those in Calasiao town, could not be harvested because workers from another town were classified as “outsiders.”

“[A farm owner] told me that her fruits were already 130 days old and many were falling to the ground. Luckily, the quarantine rules loosened a bit and she was able to harvest. But she lost around 20 percent of the fruits,” Domalanta said.

Marketing mangoes is ano­ther hurdle that growers face in the time of COVID-19. Mango suppliers need to get permits or travel passes from the Department of Agriculture (DA) to transport their produce. Their customers must also get permits from the department.

“If you are stopped at checkpoints, you can call up the buyer who would tell the checkpoint officers that you and the buyer have permits,” Domalanta said.

He said he has the permit and food pass so transporting fruits to Metro Manila markets has been smooth.

But some backyard farm owners, who have 100 trees or less, are not granted food pas­ses because they have no business permits.

Domalanta said he had been engaged in the industry long before technology to induce flowering became a staple of mango farming.

“When I was young, flower induction was done by ‘pasob’ or smudging,” he said, referring to a traditional process of speeding up flowering by building a small fire to let dense smoke billow up the tree’s canopy.

He added: “We could contract up to 10,000 trees but this year, we went down to only 3,000 trees. We were plain lucky. We would have had a big headache if we contracted so many trees during this time of COVID-19.”

But the price is good now with export quality green mangoes fetching a farm gate price of P50 a kilo, he said.

Pangasinan is the country’s top carabao mango producer. In 2017, the province produced 121,142 metric tons of mangoes.

In Zambales province, some mango sellers are trying to find new ways to reach their buyers after seeing a drop in walk-in customers due to the health crisis.

The Department of Trade and Industry (DTI), through its Bureau of Domestic Trade Promotion (BDTP) office, has been helping farmers sell their harvest to cope with their revenue losses, according to Neil Fabay, DTI development specialist in Zambales.

DTI-BDTP uses its Facebook page to advertise and accept orders with scheduled delivery dates to their office in Makati.

Fabay said they initiated an online market matching during the last week of March to support local mango farmers, particularly in the towns of Palauig and Iba, who are now struggling to sell their produce.

“Buyers can directly message us or directly contact Palauig mango growers for their orders, which will be shipped on a scheduled delivery basis,” Fabay said.

There are ongoing efforts to meet bulk orders or at least 50 crates so they can also deliver to Olongapo City and Pampanga, Bataan and Bulacan provin­ces. “So far, they already sold 100 crates of mangoes and gene­rated a total sales of P200,000,” he said.

Zambales has around 7,500 hectares of mango plantations with more than 5,000 farmers engaged in the industry, said Russel Quitaneg, provincial agriculturist.

Quitaneg said 50 percent of mango farms in the province are under contract agreement and employ some 80 contractors. The other 40 percent are considered “not productive or left to bear fruit naturally” while the remaining 10 percent are managed by growers themselves.

Despite the abundant supply of Zambales mangoes this year, farmers are also finding it hard to market due to restric­ted movements under the enhanced community quarantine.

“Some mango farmers are forced to sell their harvest at bargain prices,” Fabay said.

In 1995, the Guinness Book of World Records cited mangoes grown in Zambales as the world’s sweetest. In 2013, the DA cited Zambales mangoes as the country’s sweetest variety.

This year’s celebration of the annual Zambales Mango Festival, also known as “Dinamulag Festival” usually held between March and April, was canceled due to the pandemic.