The COVID-19 pandemic will likely halt the Philippine property boom that started in 2010 as rental rates fall and vacancy rates rise this year in magnitudes that could be worse than the fallout during the 2009 global financial crisis, property consulting firm Colliers International Philippines said.

However, the impact will not likely be as bad as the property market reversal seen when the Asian currency crisis erupted in 1997 as the local business process outsourcing—which has become much bigger to date—would likely lead the way to a rebound by 2021, Colliers senior research manager Joey Roi Bondoc said in a briefing yesterday.

“Developers learned during the Asian crisis. They were able to easily turn off the tap,” Bondoc said, referring to the deliberate move of scaling down supply to avoid price free fall. 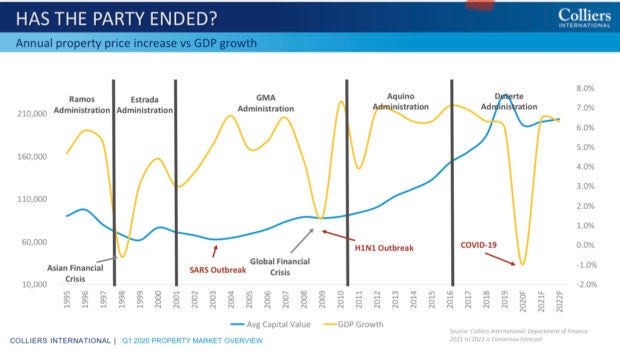 “It’s a bit harsh to say that the party has totally ended because the demand is there. There is a pause, I think. What’s happening now is we have been in a landlord’s market for an overextended period already,” said Colliers managing director Richard Raymundo.

“We’re at this pivotal point wherein it will become a tenant’s market,” Raymundo said. 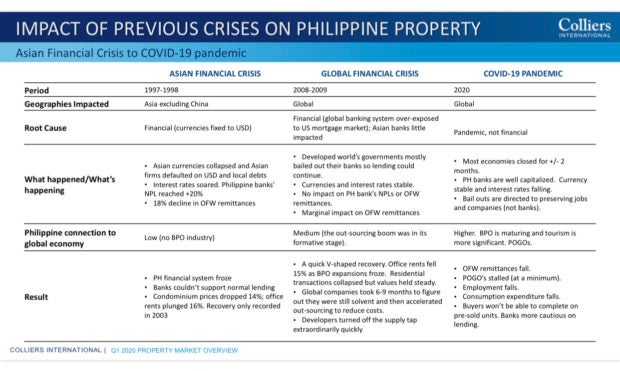 If not for Philippine offshore gaming operators (Pogos), Raymundo said the property market would have already reversed in 2016 because of a supply glut.

“So we’ve seen this extension in the upcycle because of the demand from the Pogos. That happened in the office market and had trickle-down effect on the residential and retail segments,” he said said.

Office leasing rate in Metro Manila is seen to decline by an average of 17 percent this year, while office vacancy rate is projected to rise to 5.5 percent from 4.4 percent last year. The vacancy rate can shoot up to as high as 8.3 percent to 9.4 percent if takeup falls faster than Colliers’ base case assumption. This is even as Colliers expects new office stock to drop by 23 percent this year.

In the months ahead, travel restrictions will curb the growth of Pogos, said Colliers director Dom Fredrick Andaya. However, he said demand for online gaming would likely continue as gamblers avoid going to physical casinos. The Philippines remains as a top choice among locators given the supportive regulatory environment, he added.

For the residential sector, supply will drop by 19.7 percent. Nonetheless, Colliers sees vacancy rate in Metro Manila hitting 15.2 percent this year from 11 percent in 2019, due to the slowdown of Pogos. In the first quarter, vacancy rate was at 11.3 percent, which is expected to worsen starting the second quarter. Condominium capital values are projected to drop by 15 percent this 2020. For 2021 to 2022, Colliers sees residential values growing at a more modest pace of 1.7 percent compared to its earlier forecast of 12.4 percent.

Colliers sees residential rental rate in the metropolis declining by 5.5 percent this 2020 before growing by a modest 1.9 percent from 2021 to 2022, down from its earlier medium-term growth forecast of 7.5 percent.

The price correction in the residential segment is seen to be felt the most in the middle-income segment, due to loss of jobs arising from the COVID-19 pandemic.

In the retail property sector, rental rate is likewise projected to decline by 5 percent this year, before recovering in 2022 with a 1-percent growth. Vacancy rate is seen to peak in 2022 at 12 percent as more shopping malls open to the public.

One property subsegment that is seen doing well during the current environment is the logistics/industrial warehousing sector as e-commerce transactions surge as people observe social distancing.

“I think if you look at the sectors, the one that will be first to bounce will be office. Definitely logistics [sector] is there. After office, it will be the residential and then retail and then the hotel segment,” Raymundo said.