BANGKOK  — Shares skidded in Asia on Monday after reports of a surge in new virus cases outside China. The decline followed a sell-off Friday on Wall Street. 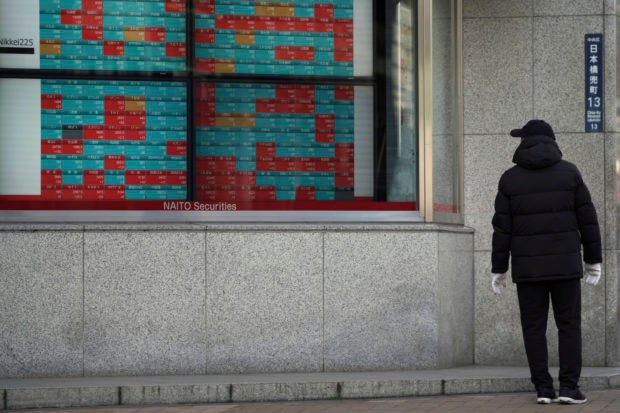 In this Feb. 7, 2020, file photo, a man looks at an electronic stock board showing Japan’s Nikkei 225 index at a securities firm in Tokyo. Shares skidded in Asia on Monday, Feb. 24, after reports of a surge in new virus cases outside China. The decline followed a sell-off Friday on Wall Street.(AP Photo/Eugene Hoshiko)

Another large jump in new cases was reported in South Korea on Monday, a day after the the president called for “unprecedented, powerful” steps to combat the outbreak that is increasingly confounding attempts to stop the spread.

Hopes that the outbreak had been contained were premature, Mizuho Bank said in a commentary, “And indeed, fears of secondary infections proliferating outside of China have come home to roost, sending risk assets in a tailspin and a wave of refuge-seeking into safe-haven.”

Stocks fell and bond prices jumped Friday on Wall Street amid signs the viral outbreak is weighing on U.S. companies.

Technology companies, which have much greater exposure to China than other industries, fell the most. Chipmakers, which rely heavily on China for both sales and supply chains, were some of the worst hit. Advanced Micro Devices slid 7%, while Nvidia fell 5.6%.

Data from IHS Markit show U.S. manufacturing and business activity slowed in February from the previous month, coming in below analysts’ expectations.

Travel restrictions, business closures and other efforts in China aimed at containing the spread of the virus have begun to disrupt supply chains and sales prospects for Apple and other big companies.

The yield on the 30-year Treasury has dipped to record lows as investors sought the safety of U.S. government bonds. It fell to a record low of 1.886%, according to Tradeweb, from 1.98% late Thursday.

The yield on the more closely followed 10-year Treasury was at 1.47%. That yield, which is a benchmark for mortgages and other kinds of loans, was close to 1.90% at the start of this year.

Expectations have been building among traders that the Federal Reserve will need to cut interest rates this year to help the economy. They’re pricing in a 90% probability of at least one cut this year, up from an 85% probability a day ago and a 58% probability a month ago.

Uncertainties are weighing on energy prices as well. Benchmark U.S. crude lost $1.21 to $52.17 per barrel in electronic trading on the New York Mercantile Exchange. It lost 50 cents to $53.38 per barrel on Friday.