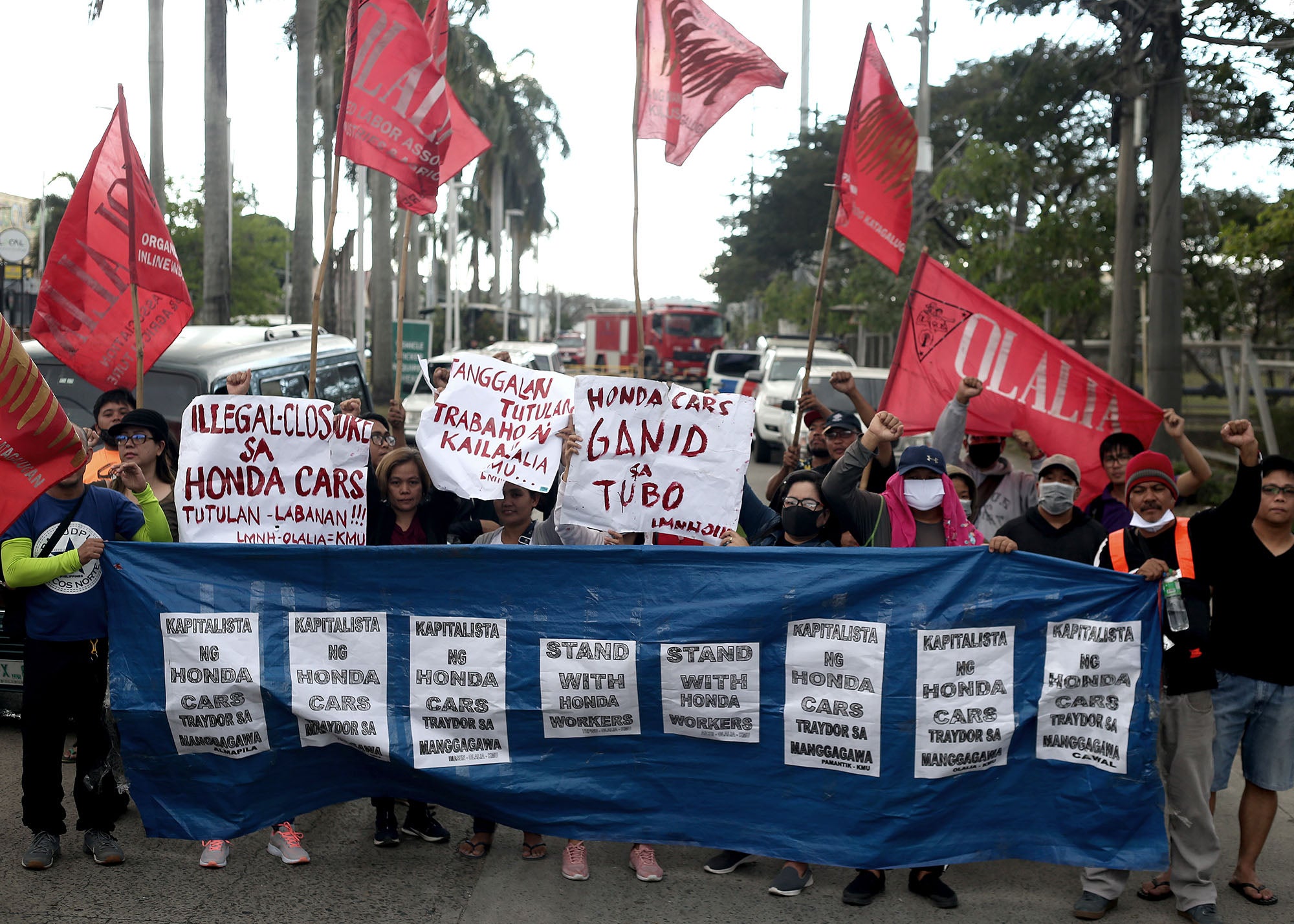 SHUTDOWN Honda employees and their supporters from other labor groups picket outside Gate 1 of the Laguna Technopark in Santa Rosa City, Laguna province. The Japanese carmaker announced on Saturday that it will shut down its manufacturing plant, claiming a two-year decline in car sales. —RICHARD A. REYES

More than a hundred workers of Honda Cars Philippines Inc. (HCPI) were holed up on Sunday inside the car factory in Santa Rosa City, Laguna province, shocked at the announcement that the Japanese company’s 28-year-old production plant in the country would close down next month.

They are the latest group of workers set to lose their jobs and soon join the ranks of 700 workers of Nokia Technology Center Philippines, which is shutting down operations, and 700 employees of Wells Fargo & Co., which is transferring its IT and business processing work in the country to India.

Labor Secretary Silvestre Bello III on Sunday said he had ordered a review of the company’s procedures to find out the “basis” of the plant shutting down.

“There are procedures (to follow before a company closes down) to be sure the employees are paid their salaries and [for us] to know what its reasons are,” he said in a phone interview.

Bello made the remarks as labor group Defend Jobs Philip¬pines urged him to directly intervene, conduct an impartial investigation and thoroughly look into the announcement of HCPI to shut down its plant.

The HCPI workers, many of whom have been with the company for over 25 years, refused to leave the premises inside the Laguna Technopark.

“We will stay here until somebody from the top management comes down and talks to us,” said union vice president Christopher Oliquino, 42.

Malacañang played down the economic impact of the Japa¬nese carmaker’s decision to shut down the plant.

“It would have minimal [impact], since there are others coming in. No, we’re not [bothered],” presidential spokesperson Salvador Panelo said, referring to other foreign investments in the country.

Oliquino said the workers were staying in the canteen and locker rooms, hoping the supplies left by the food concessionaire and the dry goods from the cooperative’s stockroom could sustain their unplanned vigil.

The union, Liga ng mga Manggagawa sa Honda, claimed there was no prior notice, not even a vague indication of a shutdown, even as the company toward the end of January reduced the production of its BR-V models from 35-38 units to only about 18 a day.

Before this, the company had decided to stop producing the Honda City model at its Laguna plant starting February, Oliquino said.

On Saturday afternoon, unsuspecting workers nearing the end of their shift were called in for a meeting that they thought would tackle the company’s sales or the collective bargaining negotiations scheduled for August.

They were surprised to see instead a projector that showed a recorded video of HCPI president Noriyuki Takakura announcing the plant closure.

“People turned emotional (upon watching the video). Some supervisors were there too, but they claimed they also had no idea,” Oliquino said.

“Then we started seeing (on the outside) many heavily built men, like security guards, setting up the barricade fence (at the gate),” he said.

HCPI released a press statement online hours later, saying its decision was made to optimize production in Asia and Oceania.

The company said it would continue its automobile sales and after-sales operation in the Philippines.

“All the while, we were confident (we’d keep our jobs). [The management earlier] gave us an assurance there would be no retrenchment since excess manpower [from reduced production] only had to be absorbed into other departments,” Oliquino said.

Bello said he was expecting the report of the Laguna labor office and conciliation board by Monday.

The union estimated job losses at 630, but Bello was confident they would find new employment with the automobile industry “booming.”

This, however, ran contrary to reports from labor unions in southern Luzon that observed a downtrend in the auto manufacturing sector since 2003 due to the entry of “completely built units” (CBUs) of cars from Thailand and other Asian countries.

“Vehicle imports have been growing, causing injury to local industry, from assembly to the local parts supply network in the country,” Lopez told reporters in a Viber message on Sunday.

“Thus, we really have to study the need to impose a safeguard duty and other measures to provide at least a level of support to the local assemblers,” he said.

Safeguard measures are imposed to protect domestic industries, which are either hurt or threatened by a surge in imports for a specific number of years.

But labor group Philippine Metalworkers Alliance (PMA) said imports were hurting local jobs but not the automotive companies themselves.

In a global value chain, a car company that cuts its vehicle production so that it could import instead does not feel any significant loss. In the end, PMA argued, multinational companies would still benefit, even if they began relying more on imports.

The Department of Trade and Industry (DTI) is investigating the auto industry’s performance from 2014 to 2018.

The investigation was prompted by a petition for a safeguard measure filed by PMA last year.

Lopez said the DTI would meet with the company on Monday to talk about “alternative options” that would minimize the impact of its decision.

For at least two years in a row, Honda’s sales volume has been declining as the Japanese carmaker — along with the rest of the auto industry — still struggled under the weight of the Duterte administration’s higher auto excise rates.

The higher auto excise was slapped in 2018, which coincided with the spikes in the prices of basic goods and services, prompting consumers to put priority on more pressing necessities over buying new vehicles.—With reports from Julie M. Aurelio and Tina G. Santos