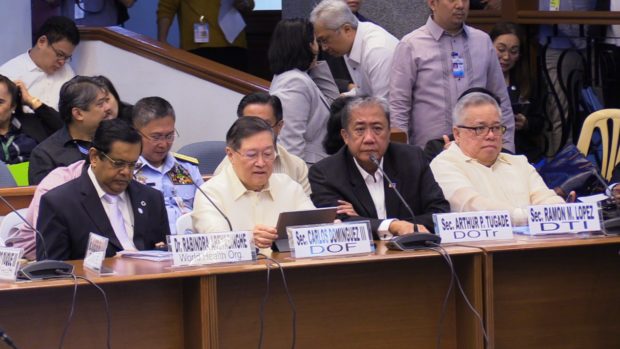 While the novel coronavirus (nCoV) could reduce tourist arrivals and hurt some Philippine exports to China, the virus isn’t expected to make the Philippine economy sick and fail to achieve higher growth, according to Finance Secretary Carlos G. Dominguez III.

“At this moment, it is reasonable to expect that while these developments might slightly restrain our economic expansion, these threats are not enough to force a dramatic reduction in our growth estimates,” Dominguez said on Tuesday (Feb. 4).

“We are standing by our working projection of a GDP growth rate of between 6.5 percent and 7.5 percent for 2020,” Dominguez said at a Senate hearing, using the acronym for gross domestic product.

GDP growth slowed to an eight-year low of 5.9 percent in 2019, but the administration’s economic team was optimistic of a rebound this year given on-time implementation of the P4.1-trillion 2020 national budget.

“Given that we may be in the early stages of this outbreak, it will be a challenge to estimate its potential economic costs,” Dominguez said at the hearing on government preparations for the nCoV outbreak.

“We are consoled by the observation that the virus has limited local transmissions outside China,” Dominguez said.

He, however, said the virus’ impact on the economy will “most likely be centered on the tourism sector.”

But it won’t be unique to the Philippines, he said.

“The travel and tourism industry around the globe is taking a hit as a result of the various levels of travel bans imposed by national governments and of voluntary decisions of airlines to cut flights to and from China,” Dominguez said.

Citing historical data, Dominguez said that during the SARS outbreak in 2003, tourist arrivals declined 1.3 percent to 1.9 million but jumped by 20.1 percent to 2.3 million in 2004.

A decline in inbound tourists again struck in 2009 at the height of the H1N1 bird flu outbreak in 2009, although Dominguez noted that the global
economic downturn at that time had a bigger impact on the travel industry.

By the time of the MERS-COV outbreak, the Philippines’ tourism sector was already “resilient,” Dominguez said.

Dominguez added that the tourism industry’s direct gross value added continued to increase despite the episodes of viral outbreaks as
tourists’ average spending was also increasing “mainly due to a substantial increase in arrivals from China.”

“While travel restrictions are in force to protect the health of Filipinos, tourism’s direct gross value added will likely decrease,” the finance chief said.

On the flip side, Dominguez said it would benefit the country when those who decided to suspend their overseas travel plans instead pushed
through with domestic travel.

In terms of manufacturing, Dominguez said that Wuhan—the Chinese city where the virus originated—was a major industrial and transport hub in the mainland.

The temporary halt in operations of a number of
Chinese factories amid the lockdown “could create some supply chain problems that will affect trade and industry elsewhere,” Dominguez
said.

Over half of Philippine exports to China last year were electronics, Dominguez said, which could take a hit.

“In the immediate term, the temporary closures of factories in Chinaand possible disruption in global supply chains may cause a temporary,
slight decline in our exports, particularly of electronics and auto parts,” he said.

“Incidentally, our top imports from China such as steel, machinery and petroleum are products that do not seem to carry the nCoV virus though
we will continue to take all necessary precautions,” he added.

The latest government data showed that China and Hong Kong combined were the Philippines’ top export destinations as well as sources of
imports as of end-November 2019.

The Philippines may also serve as an alternative destination to host Chinese firms taking a hit from the outbreak of nCoV.

“The Department of Trade and Industry has committed to work closely with affected Chinese and China-based companies who will be looking to strengthen their operations by adding a production site outside China,” Dominguez said.