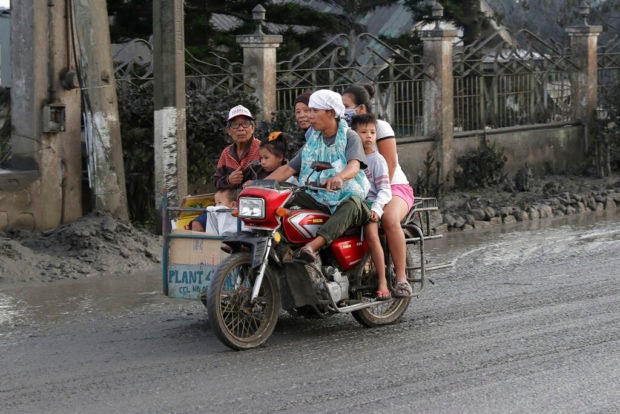 Residents evacuate along ash fall covered road as Taal Volcano continues to spew ash on Monday Jan. 13, 2020, in Tagaytay, Cavite province, south of Manila, Philippines. The small volcano near the Philippine capital that draws tourists for its picturesque setting in a lake erupted with a massive plume of ash and steam Sunday, prompting the evacuation of tens of thousands of people and forcing Manila’s international airport to shut down. (AP Photo/Aaron Favila)

Also, given the country’s susceptibility to natural calamities, the government will conduct a rebidding for the planned one-year program to insure and protect public assets in disaster-prone areas.

“We have in place a CAT (catastrophe-linked) bond that can be triggered by a one-in-19-year earthquake that may be an aftermath of the Taal eruption. A one-in-19-year event corresponds to a modeled loss of P11 billion. This loss would be similar to the losses during the 1990 Luzon earthquake in Nueva Ecija,” Finance Secretary Carlos Dominguez III said.

In November last year, the Philippines issued $225 million in CAT bonds and listed these securities at the Singapore Stock Exchange.

The three-year CAT bonds maturing on Dec. 2, 2022, were issued in two tranches—$150 million covering losses from tropical cyclones on top of $75 million in protection for losses from earthquakes.

In response to the volcanic explosion and the tremors it caused, Dominguez said the government was first and foremost “responding urgently to the immediate needs of those directly affected” because “our No. 1 priority is the safety and security of the families and communities that are directly vulnerable to this natural disaster.”

“Following the immediate human security responses, which are the priority, we will of course need to take stock of the full economic costs of this natural disaster, quick estimates of which are still being generated by relevant national agencies and local governments. The impact would depend on the type of eruption,” Dominguez said.

The finance chief noted that the most affected areas—Calabarzon, the National Capital Region (NCR) and Central Luzon—were “some of the heftier pistons of our country’s economic engine.”

Dominguez said the government would do what was necessary to get areas affected by the natural disaster “up and running as fast as possible.”

In 2018, Calabarzon accounted for 17 percent of the Philippines’ gross domestic product (GDP); NCR, 36 percent of the country’s total output, and Central Luzon, 9 percent, Dominguez pointed out.

“Based on our estimates, our country loses 1 to 2 percent of our GDP due to natural disasters, especially typhoons, every year,” he said.

Meanwhile, National Treasurer Rosalia V. de Leon told the Inquirer on Monday that there would be a rebidding among interested reinsurers for the P2-billion national indemnity insurance program of the state-run pension fund Government Service Insurance System (GSIS).

De Leon said they were still discussing the timetable for the rebidding.

In December, De Leon disclosed that there was a failed bidding for the program even as the GSIS had allowed reinsurers to submit bids until Dec. 11, a one-week extension from the initial Dec. 4 deadline.

The contract would have had covered the period Dec. 19 last year until Dec. 19 this year.

For his part, Dominguez said the government was working on a natural catastrophe cover for strategically important assets (schools, roads and bridges), which would protect against natural catastrophes such as tsunamis, volcanic eruptions, typhoons, earthquakes and storm surges. INQ