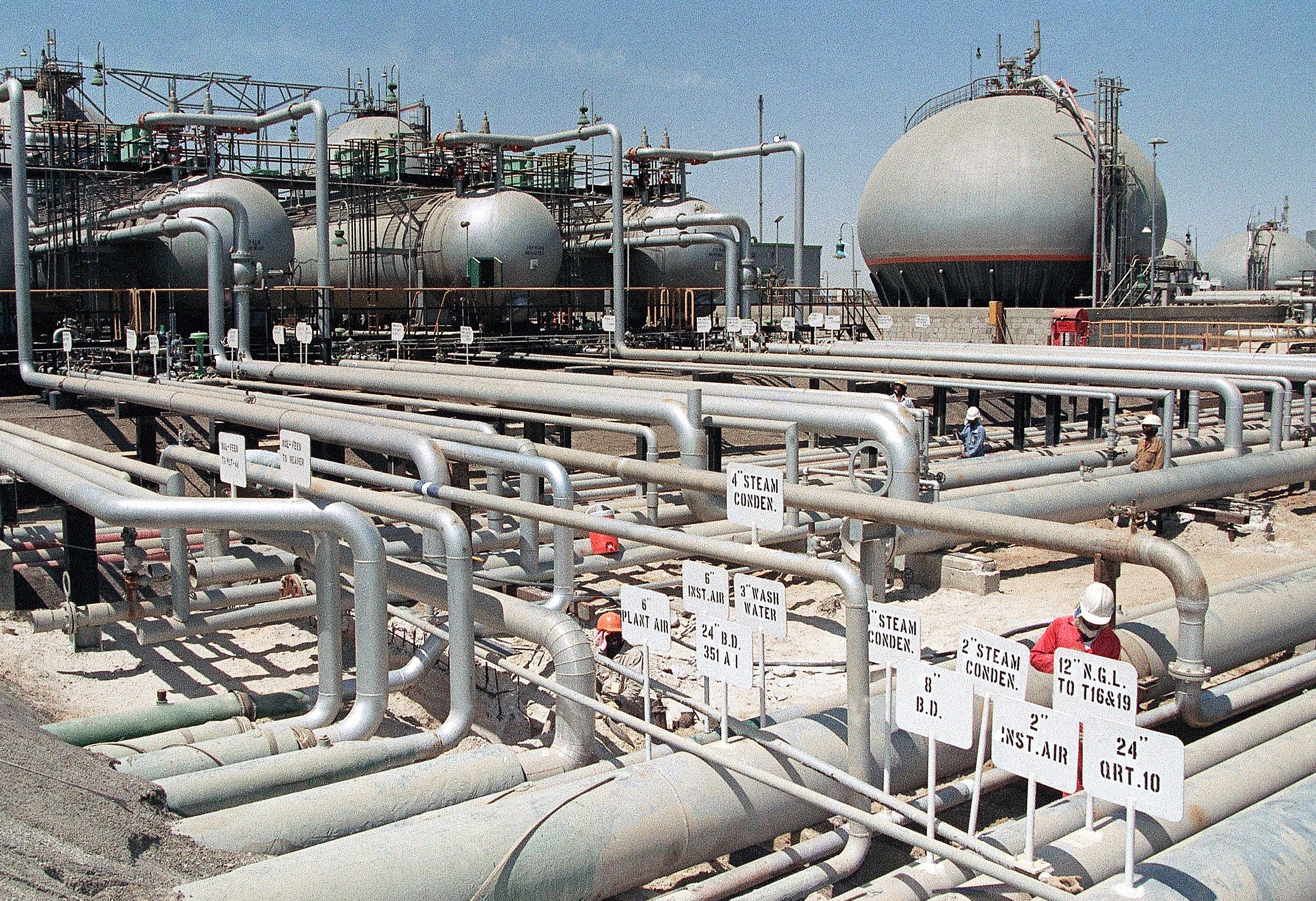 In this file photo dated 1990, Aramco refinery at Ras Tannura, Saudi Arabia. The price of oil surged Friday Jan. 3, 2020, as global investors were gripped with uncertainty over the potential repercussions and any retaliation after the United States killed Iran’s top general Qassem Soleimani.(AP Photo/FILE)

PROVIDENCE, Rhode Island — The global benchmark for crude oil rose above $70 a barrel on Monday for the first time in over three months, with jitters rising over the escalating military tensions between Iran and the United States.

The Brent contract for oil touched a high of $70.74 a barrel, the highest since mid-September when it briefly spiked over an attack on Saudi crude processing facilities. Stock markets were down as well amid fears of how Iran would fulfill a vow of “harsh retaliation.”

“The market is concerned about the potential for retaliation, and specifically on energy and oil infrastructure in the region,” said Antoine Halff, a Columbia University researcher and former chief oil analyst for the International Energy Agency. “If Iran chose to incapacitate a major facility in the region, it has the technical capacity to do so.”

The U.S. killed Iranian Gen. Qassem Soleimani in Iraq on Friday. Early Sunday, as Iran threatened to retaliate, President Donald Trump tweeted the U.S. was prepared to strike 52 sites in the Islamic Republic if any Americans are harmed.

Fears that Iran could strike back at oil and gas facilities important to the U.S. and its Persian Gulf allies stem from earlier attacks widely attributed to Iran.

The U.S. has blamed Iran for a wave of provocative attacks in the region, including the sabotage of oil tankers and an attack on Saudi Arabia’s oil infrastructure in September that temporarily halved its production. Iran has denied involvement in those attacks.

“Targeting oil infrastructure could raise prices and bring worldwide economic pain and put Iran on the front burner,” which might be exactly the kind of message its leaders are looking to send, said Jim Krane, an energy and geopolitics researcher at Rice University.

Compared to other methods of attack, targeting energy sites also “doesn’t kill a lot of people,” Krane said. “It’s capital-intensive, it’s not people-intensive. It’s a safer option in terms of the virulence of reprisal.”

It would still wreak havoc on the global economy, he said, because of the way that oil markets affect other energy-intensive industries such as airlines, shipping, and petrochemicals.

Global stock markets have been sliding since Friday. European indexes were down over 1% on Monday after Asia closed lower. Wall Street was expected to slide again on the open, with futures down 0.6%.

At the same time, some experts say the effect of a Middle Eastern geopolitical crisis on oil prices may not be as great as it once was. The U.S. energy industry, for instance, can ramp up shale oil production in places such as Texas.

“We’re in this new territory where the world oil markets are more dynamic and can tolerate this disruption more than they used to,” said Michael Webber, a mechanical engineering professor at the University of Texas at Austin.

Tensions between the U.S. and Iran have steadily intensified since Trump’s decision to withdraw from a 2015 nuclear deal and restore crippling sanctions.

But after the attack on Saudi Arabia’s crucial Abqaiq oil processing facility in September, Halff said the “market was able to dismiss it pretty quickly, partly because there was a perception that shale oil was pretty abundant.”

After that incident, the price of oil surged over 14% in a day but lost those gains over the next two weeks.

Halff said the killing of Iran’s top general is different.

“This is not something that can be repaired,” he said. “You can repair a facility. You can’t bring somebody back to life. There’s no turning back.”