The holidays are unquestionably an exciting time but all the hustle and bustle can also bring unexpected  medical concerns, including increased risk for heart attack and stroke. It is therefore important to know the symptoms, and not to delay seeking medical attention.

A stroke is a brain attack that affects about 15 million people worldwide. In the Philippines, nine out of 1000 people develop stroke and majority of which is due to a vascular occlusion (blockage of a blood vessel, usually with a clot) or what is known as acute ischemic stroke. Stroke remains to be the leading cause of disability among Filipinos and the second leading cause of death in the country. 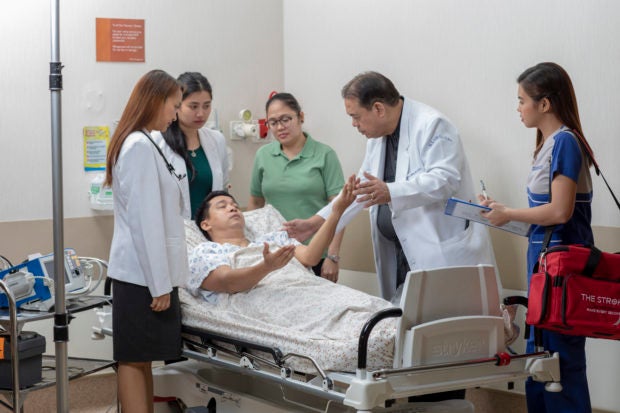 A stroke is a medical emergency wherein blood flow into the brain is suddenly interrupted in either two mechanisms: bleeding inside the brain or occlusion of blood vessels inside the brain. Patients who had sudden onset of focal neurologic deficits must hastily be rushed in the nearest stroke-ready hospital for immediate neurological management.

Symptoms of sudden drooping of one side of the face, one sided weakness or numbness, slurring of speech, imbalance and doubling of vision are early signs of stroke.

Time is Brain: Nothing more precious than time

In cases when there is an abrupt occlusion in the vessels inside the brain, the brain tissue may be rescued if blood flow is restored rapidly after onset of acute ischemic stroke. Intravenous thrombolysis using recombinant tissue plasminogen activator or (IV rtPA) is a clot-busting drug that has been the standard of care since 1995. In 2008, FDA approved its extended use up to 4.5 hours of ischemic stroke onset.

But since 2015, the standard of care for stroke has radically changed with the establishment of mechanical thrombectomy as an effective treatment modality. This is a direct intra-arterial mechanical removal or retrieval of clot inside the brain vessel which otherwise will prove to be resistant to standard intravenous clot-busting rTPA drug.

A team of specialists who can hastily recognize and address patients who could have a possible stroke are also capable of effectively administering a drug that could restore the occluded blood flow. In the Philippines, studies showed that rTPA treatment resulted in more independent patient outcomes or functionality after 90 days of stroke. This means that despite having a stroke, more patients were still be able to perform the things they can do before the illness, and more patients are able to go back to their old way of living. The caveat is that it can only be given within a limited time window of opportunity.

At the heart of one of the busiest streets of Metro Manila, The Medical City (TMC) Ortigas has an ace upon its sleeve in providing the best possible outcome for stroke patients who may come in beyond 4.5 hours of stroke onset with its robust 24/7 mechanical thrombectomy service. As one of the very few medical institutions in the Philippines capable of performing this procedure, TMC boasts of 73% survival rate among those who underwent mechanical thrombectomy and 80% of those who have survived had excellent functional outcomes.

Mechanical thrombectomy, which is relatively new not only locally but internationally, is an image-guided therapy where a clot that had occluded a large blood vessel in the brain is manually extracted by stent and catheter devices in order to quickly restore perfusion of the brain tissue – a sophisticated procedure that can literally save billions of neurons that was never before possible. International studies have demonstrated its ability to be beneficial even up to 16 hours from the onset of symptoms with some even capable of achieving favorable neurologic outcome in patients up to 24 hours from symptom onset. This extended time window is an opportunity for ischemic stroke patients to have good neurologic outcomes even if their symptoms have been present beyond six hours. It greatly reduces hospital stay, and has faster rate of recovery.

Any patient with signs and symptoms of possible stroke rushed to a stroke-ready hospital can be assessed for stroke severity. A stroke severity scale termed NIHSS scoring is used to determine how bad the stroke is. Patients with moderate to severe stroke can greatly benefit from mechanical thrombectomy. Before the advent of mechanical thrombectomy, patients with severe stroke and those who have presented beyond six hours would have no other means to save the deprived brain tissue aside from routine post stroke care and prevention to lower the chances of another stroke.  After the inception of mechanical thrombectomy, such major disabilities including the late wake-up strokes that typically reach hospitals beyond 4.5 hours can now achieve less disability and with highest chance of reversing symptoms – a major medical breakthrough that was never seen for over two decades. Mechanical thrombectomy is proven efficient, effective and superior in terms of increasing survival of large vessel or ischemic stroke patients.

Dr. Erwin Jocson is an attending Interventional Neuroradiologist who rolled the series of successful mechanical thrombectomy cases for TMC. He, alongside with highly efficient brain attack team, has helped in reversing the major deficits of severely disabling and potentially fatal ischemic strokes of the Acute Stroke unit.

If there’s a hospital that can execute systematic and highly organized workflow for mechanical thrombectomy, it’s the TMC Enterprise with a mother ship model from Main (Ortigas) that closely collaborates with its Clark, South Luzon, and Iloilo facilities in a seamless workflow coordination of experts especially its Brain Attack Team, emergency departments, and radiological facilities. All three TMC hospitals have state-of-the-art Neuro Catheterization Laboratories where mechanical thrombectomy procedures are performed.

“The nearest hospital may not always be the right hospital,” said Dr. Jocson as he cited the importance of access to a stroke-ready hospital with a proven workflow and outcomes that can deliver such neurological intervention.

At TMC, the workflow starts from triage, team activation, transport, and case preparation. A patient with symptoms of stroke is immediately triaged by competent Emergency Physicians who will activate The Brain Attack Team. The team is composed of a neurologist, neuro-interventionalist, neurosurgeons and stroke nurses trained in accurately identifying stroke patients by adapting standard of care neuroimaging, timely delivery of thrombolysis with rTPA within the golden period of 4.5 hours and when deemed eligible can perform mechanical thrombectomy to provide the best stroke care possible, even for those patients where clot busting medication could not be delivered due to contraindications.

Dr. Joann Soliven, TMC Neurologist and Head of the Acute Stroke Unit, said stroke cases are becoming more frequent and have been affecting even the younger population.

“We must be more vigilant in promoting stroke awareness in the community. Everything starts from the community so we should spread the knowledge about stroke and its prevention. Neighboring hospitals that receive possible stroke patients who can benefit from either thrombolysis or mechanical thrombectomy can rush them to the nearest stroke-ready hospital such as The Medical City,” said Dr. Soliven.

TMC’s emergency hotline is 689-8153. To know more about the services of the Department of Neurology, Institute of Neurological Sciences, please call 9881000 ext. 6270.