Global stocks sink ahead of US tariff deadline, US, EU rates 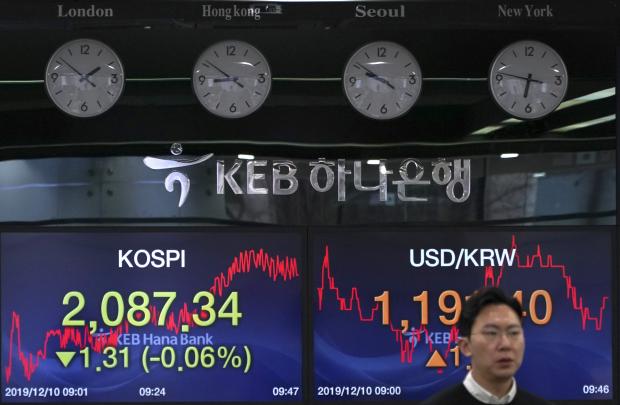 Markets also were watching for the outcome of Britain’s snap election Thursday amid uncertainty over plans to leave the European Union.

Benchmarks in London and Frankfurt declined in early trading. Tokyo and Hong Kong declined while Shanghai closed higher after spending most of the day in negative territory.

Washington is due to impose new tariff hikes Sunday on $160 billion of Chinese goods in a fight over Beijing’s technology ambitions and trade surplus.

Investors expect President Donald Trump to put off or scrap the increase but talks on an interim “Phase 1” agreement announced in October have failed to agree on details.

“All hell could break loose if the tariffs don’t get postponed,” said Stephen Innes of AxiTrader in a report. That would tell investors “they have yet again been taken down the trade talk garden path only to end up at the cliff edge of trade war purgatory.”

Chinese spokespeople have appealed for a prompt resolution to the fight that threatens to chill global economic growth. Trump rattled markets last week by saying he might be willing to wait until after next year’s presidential election.

On Wall Street, futures for the Standard & Poor’s 500 index and the Dow Jones Industrial Average were down less than 0.4%.

The U.S. central bank has cut its benchmark lending rate three times this year as what Chairman Jerome Powell called insurance against the economic drags from the tariff battle with Beijing and slower global growth.

A meeting of the European Central Bank on Thursday also is expected to produce no surprises. Forecasters expect the bank to affirm commitment to its dovish bias amid warnings about European economic weakness and risk to growth.

British leaders are looking to Thursday’s election for 650 seats in the House of Commons to break an impasse over departure from the EU and London’s future relationship with the trade bloc.

Prime Minister Boris Johnson pushed for a vote more than two years early in hopes of winning a majority. He has promised to take Britain out of the EU by Jan. 31 is his Conservatives win.

The opposition Labour Party is promising to renegotiate the divorce deal, then give voters the choice in a referendum of leaving the EU on those terms or remaining in the bloc.

CHINA INFLATION: Chinese consumer inflation spiked to a seven-year high of 4.5% due to shortages of pork that pushed up food costs. The price of pork rose 110.2% over a year earlier. An outbreak of African swine fever has disrupted supplies by prompting farmers and Chinese authorities to quarantine, destroy or slaughter early millions of pigs. Forecasters noted the peak of the outbreak appeared to be passing and pork prices rose only 3.8% compared with the previous month.

ENERGY: Benchmark U.S. crude lost 7 cents to $58.95 per barrel in electronic trading on the New York Mercantile Exchange. The contract declined 18 cents on Monday to close at $59.02. Brent crude, used to price international oils, shed 3 cents to $64.22 per barrel in London. It lost 14 cents the previous session to $64.25.

LeBron James scores 30 as Lakers get even with Celtics