BEIJING – World shares skidded Thursday, tracking moderate declines on Wall Street as anxiety mounted over the possibility the U.S. and China may not reach a trade deal before next year. 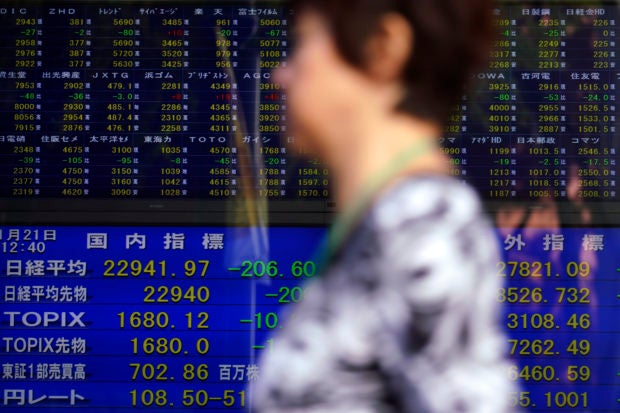 A woman walks past an electronic stock board showing Japan’s Nikkei 225 index at a securities firm Thursday, Nov. 21, 2019, in Nagoya, central Japan. Shares skidded Thursday in Asia after moderate declines on Wall Street as anxious mounted over the possibility the U.S. and China may not reach a trade deal before next year. (AP Photo/Eugene Hoshiko)

China’s Commerce Ministry on batted away rumors that the talks were in trouble with a spokesman saying Beijing was committed to continuing discussions on core concerns.

A published report suggested the preliminary “Phase 1” trade pact under discussion with China might not be completed this year as negotiators continue to wrestle over differences.

Investors have been hoping the world’s two biggest economies can reach a deal before new and more damaging tariffs take effect Dec. 15 on about $160 billion in Chinese imports. Those duties would cover smartphones, laptops and other consumer goods.

A report by Reuters cited an unnamed Trump administration official saying it was possible a deal might not be reached, but more likely that it would. The comments spooked investors already twitchy over the possible blow to the talks from U.S. Congressional resolutions expressing support for human rights in Hong Kong, where political protests have dragged on for months.

Commerce Ministry spokesman Gao Feng told reporters at a weekly news conference that he had no new information to disclose. But he dismissed speculation the talks were in trouble, saying “outside rumors are certainly not correct.”

Gao said China is continuing the discussions in hopes of resolving the disputes over technology and industrial policy for the sake of both countries and the world as a whole.

Growing optimism among investors that the U.S. and China were making progress toward a limited trade deal helped pave the way for gains in the market in recent weeks, including a string of all-time highs for the major stock indexes.

That optimism dimmed Wednesday as investors weighed the implications of more tariffs kicking in next month.

The two countries have raised tariffs on billions of dollars of each other’s goods in the fight over China’s trade surplus and technology ambitions. That weighs on trade worldwide and threatens to depress corporate earnings and global economic growth, which has already showed signs of slowing.

In other trading, benchmark crude oil shed 29 cents to $56.72 per barrel in electronic trading on the New York Mercantile Exchange. It rose $1.66 on Wednesday to settle at $57.01 a barrel. Brent crude oil, the international standard, gave up 37 cents to $62.03.

Read Next
‘You’ve been using our products for years… You just didn’t know it … AISIN’
EDITORS' PICK
‘A greener, cleaner tomorrow’: A how-to guide for Filipinos who want to help with today’s energy crisis
China expands lockdowns to 25M people to halt viral outbreak
SM continues to send relief assistance to remote towns in Batangas
Get exciting deals and discounts when you download the new McDonald’s App
5-year-old Chinese boy in Cebu tests negative for novel coronavirus
DOH: Second person ‘under investigation’ for 2019-nCoV in Tacloban City
MOST READ
Philippines orders 12 helicopters from Russia—Duterte
Duterte: China, Russia have respect for PH sovereignty
Dina Bonnevie on Coney Reyes: We have forgiven each other
Wuhan tourists on Boracay to be flown back to China
Don't miss out on the latest news and information.