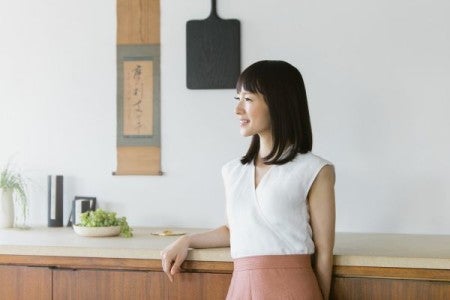 Five years after her bestselling “The Life-Changing Magic of Tidying Up”, the decluttering guru has launched a new e-commerce shop based on her KonMari method for minimalist living.

The online shop, available through her KonMari website, presents a selection of approximately 150 homeware and fashion items, ranging in price from $8 to $300.

Kondo explained that the listed products are an expression of the decluttering philosophy laid out in her bestseller, with each of them chosen for their ability to “spark joy” in her daily life.

“My tidying method isn’t about getting rid of things — it’s about heightening your sensitivity to what brings you joy. Once you’ve completed your tidying, there is room to welcome meaningful objects, people and experiences into your life,” she wrote in a note on her site.

Among the lifestyle items on sale are a linen kimono robe listed at $115, a brass mirror for $150, as well as a Japanese donabe pot costing $180.

The e-commerce shop was met with criticism on social media, where users called out Kondo for promoting consumerism after having encouraged people to get rid of unnecessary things in her bestselling book and Netflix hit show, “Tidying Up With Marie Kondo”.

“I’m not sure what at #mariekondo’s new store sparks more joy — her $75 cotton towel or the $12 ‘Shiatsu Stick,'” one wondered on Twitter.

I'm not sure what at #mariekondo's new store sparks more joy – her $75 cotton towel or the $12 "Shiatsu Stick:" https://t.co/kLVfsJDRMA

No-one, but no-one needs a tea caddy for $200. #MarieKondo has lost the plot.#decluttering #shopping #irony pic.twitter.com/umnau5wTWs

In a recent sit-down with Fast Company, Kondo defended her KonMari online store, claiming that the catalog of items responds to the numerous queries from fans about the products she uses in her everyday life.

“I’m not saying the fewer things you have, the better. The emphasis is more on whether you are savoring the love you have for your belongings and taking the time to care for them. If you have a huge house with ample storage, it’s perfectly natural to have a lot of things,” she added.

This is not Kondo’s first foray into retail. The tidying guru has previously attached her name to sets of organizing boxes that have been sold out since they were released last summer.

As the Guardian pointed out, the Japanese e-commerce giant Rakuten has also recently announced a new commercial partnership with Kondo. IB/JB

Freebies are the key hook in new ‘streaming wars’