World shares retreat on jitters over US bill on Hong Kong 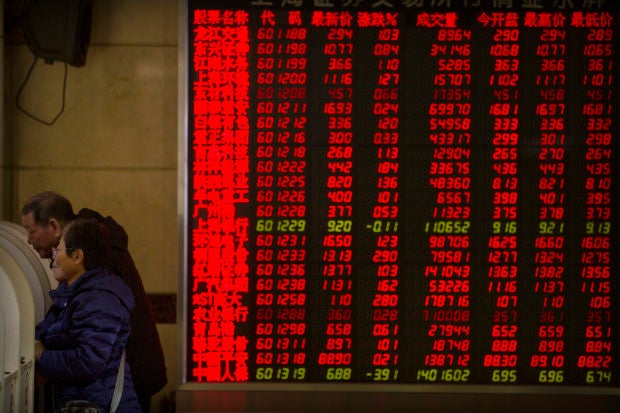 In this Tuesday, Nov. 19, 2019 photo, Chinese investors use computer terminals as they monitor stock prices at a brokerage house in Beijing. Shares retreated in Asia on Wednesday after Japan reported its worst monthly decline in exports in three years. (AP Photo/Mark Schiefelbein)

The resolution has added to worries over prospects for Beijing and Washington to resolve a tariff war that is hammering manufacturing in the world’s two biggest economies.

The Senate on Tuesday easily approved the Hong Kong Human Rights and Democracy Act, which passed by a voice vote. It now goes to the House, which has already endorsed similar legislation.

In Hong Kong, a small band of anti-government protesters, their numbers diminished by surrenders and failed escape attempts, were still holed up at a Hong Kong university Wednesday as they braced for the endgame in a police siege of the campus.

Police were waiting the demonstrators out after 10 days of some of the most intense protests the city has seen in more than five months of often-violent unrest. Since the siege began Sunday, more than 1,000 people have been arrested and hundreds of injured treated at hospitals, authorities said.

The U.S. pressure on what Beijing says is purely an internal Chinese issue could complicate efforts by President Donald Trump’s administration to forge a trade deal with Beijing, analysts said.

“Now that the ‘HK bill’ has passed by an overwhelming majority in the Senate, it will be difficult for the White House to hold out against this bipartisan pressure, which could to put another snag in the trade talk lines,” Stephen Innes of AxiTrader said in a commentary.

Beijing and Washington are negotiating a preliminary deal that could help avert increases in the billions of dollars in tariffs each side has imposed on the other’s exports in the dispute over industrial and technology policy and trade.

Trump said Tuesday he was prepared to raise tariffs on Chinese exports further if an agreement cannot be reached.

Trump said he was “very happy” that China and the U.S. are talking. But he added, “If we don’t make a deal with China, I’ll just raise tariffs even higher.”

The tariff war between China and the U.S. has stretched for over a year, squeezing exporters across Asia.

Tokyo’s Nikkei 225 index declined 0.6% to 23,148.57 after customs data showed the country’s exports falling 9.2% in October from a year earlier, with sharp declines in shipments to China, South Korea and the U.S.

Japan’s exports to the U.S. dipped 11% in October, marking the third straight month of declines and the worst drop in three years. Imports from the U.S. fell 17%.

Australia’s S&P ASX 200 fell 1.4% to 6,722.40 as energy and financial companies declined. Banks were hit by allegations by regulators that Westpac, a bank, is suspected of violating anti-money laundering laws.

In energy trading Wednesday, benchmark crude oil lost 20 cents to $55.15 per barrel in electronic trading on the New York Mercantile Exchange. It fell $1.79 to settle at $55.35 a barrel on Tuesday. Brent crude oil, the international standard, lost 24 cents to $60.67 per barrel after dropping $1.53 overnight.