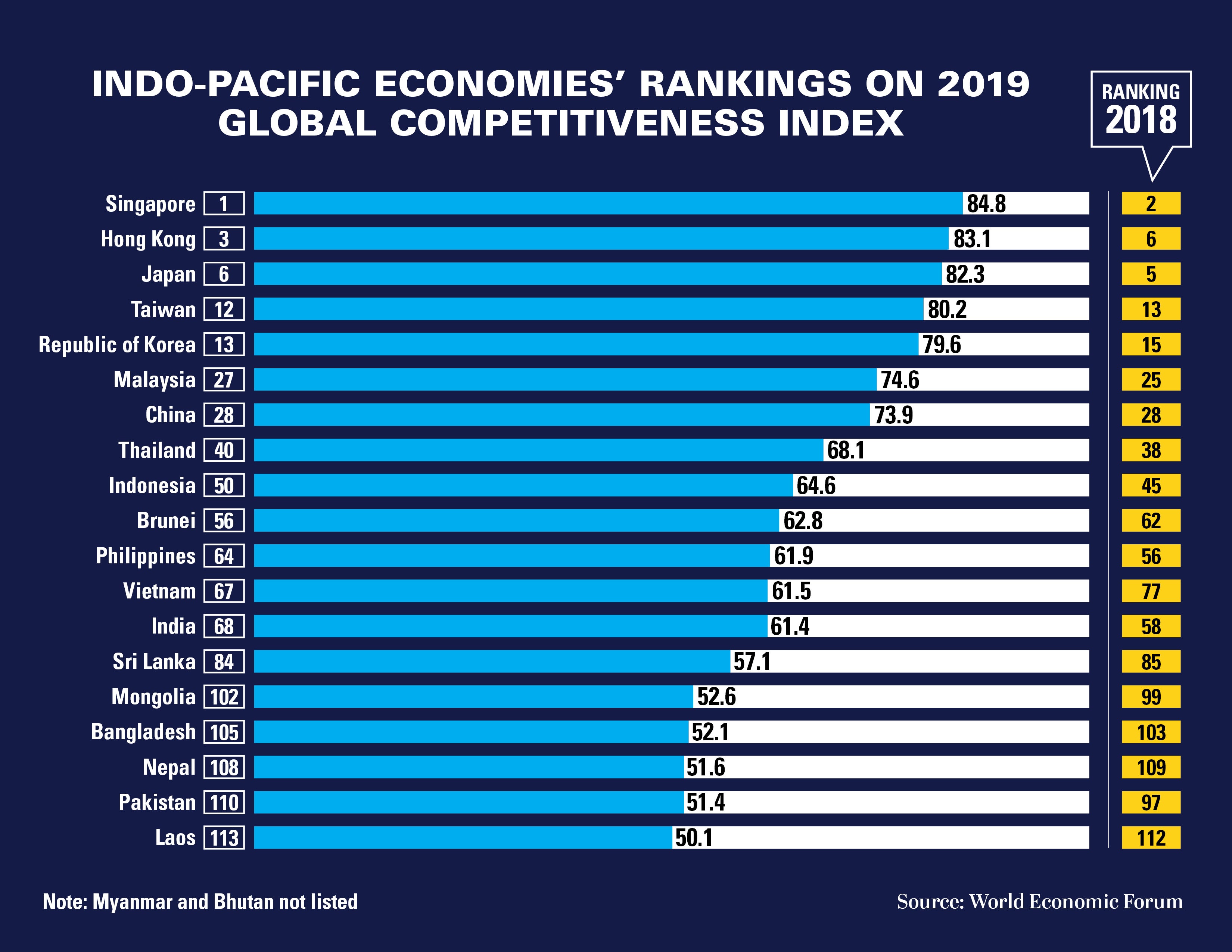 BANGKOK — The World Economic Forum has released its competitiveness rankings for 2019. The Global Competitiveness Report series is celebrating its 40th year of such reports since launched the project first launched in 1979 as a way to provide an annual assessment of the drivers of productivity and long-term economic growth.

Overall, this year’s results show that as a region, East Asia and the Pacific achieved the highest median score among all regions, coming out ahead of Europe and North America. However, a peek below the surface of the rankings show a wide gap between the highest-performing East Asia and Pacific countries, and the lowest.

The competitiveness gap between the best and worst performers in the region, for example, is significantly larger—34.7 points—than in Europe and North America—a gap of 28.9 points.

While many countries in East Asia and the Pacific stand out as striking success stories, there are a few in the region that will need to progress faster to bridge this wide gap.

Thanks to an improvement in its overall score—combined with a diminished performance by the United States— Singapore has overtaken the US as the world’s most competitive economy. Th WEF particularly highlighted Singapore’s scores regarding its financial system, market efficiency and macroeconomic stability. The country scored less well, however, when it comes to markers like freedom of the press—it ranks 124th—and sustainability.

Japan ranked sixth in the overall rankings this year, down one notch from 2018. Despite the small drop in overall score, the economy’s performance across the 12 pillars the WEF grades on remained almost unchanged. The WEF lists Japan’s technological capacity as one of its major boons, calling it “one of the most technology-savvy nations in the world”. In terms of areas in which Japan could improve, the Forum suggests that Japan should look to tackling rigidities that exist within its labor market that are currently holding it back.

The countries that rose in the rankings Taiwan rose one spot to finish this year’s ranking at the 12th position. Taiwan also has the distinction of being one of one four economies to score above 80 on the Innovation capability rankings—the other economies at this same level were Germany, the United States, and Switzerland.

The Republic of Korea rose two spots to finish 13th globally. Korea features in the top 10 of five of the competitiveness pillars, and leads the world in ICT adoption. The report particularly highlights Korea’s achievements in fibre optics and internet penetration. “The country boasts the most optical fibre connections per capita in the world (31.9 subscription per 100 people) and 96% of the population uses the internet on a regular basis.” Areas where Korea showed less promise included market inefficiency, party due to a lack of domestic competition and high trade barriers.

Another factor holding Korea back is its labour market, a category in which the county ranks toward the bottom. The WEF writes of Korea’s job system as one that “is characterized by a rigid, de facto two-tier system of ‘insiders’, who enjoy permanent contracts and generous benefits, and precarious ‘outsiders’. Vietnam stands out globally as the most improved economy according to the report. The country rose 10 spots to land at 67th on this year’s rankings. Two countries, however, which in comparison to Vietnam’s success illustrate the sheer drop-off between Asia’s most competitive economies and its least, are Cambodia (up four spots to 106th) and Lao PDR (down one spot 113th), both of which the WEF describes as having “significant competitiveness deficits.”

As far as the region goes, another country with an impressive level of improvement is Sri Lanka , which WEF highlighted as South Asia’s most improved economy, coming in at 84th this year.

Nepal rose in this year’s rankings, up one spot to come in at 108, but that isn’t much reason to celebrate. The country has the unfortunate distinction of having one of the least competitive economies in South Asia, only coming out ahead of Pakistan. Overall, the WEF took issue with the economy in terms of innovation capability, information, communication and technology adoption, product market development, judicial independence and government’s long-term vision.

China ranks 28th overall this year, a position that is unchanged from 2018’s report. China is by far the best performer among the BRICS economies: 15 places ahead of the Russian Federation, 32 places ahead of South Africa and some 40 places ahead of both India and Brazil. China benefits from the sheer size of its market and macroeconomic stability. But, the report warns that as the shadow of the Great Recession approaches, with a possible slowdown of the global economy looming, emerging economies like China’s are at risk of their own slowdown or stagnation.

One particular bright spot, however, that the WEF chose to highlight when it comes to China’s economic strength are the promising overtures the country is taking toward greater environmental sustainability, including greater investment in renewable energy. The country has invested $132 billion in clean energy technologies so far, with potentially more on the horizon.

The countries that lost ground

First, let’s take a look at Asean. Malaysia , which once again took the second spot in Asean for the third year in a row , nevertheless sank 2 spots to rank 27th this year. Thailand , which takes the third rank in Asean (down 2 places to 40th) in part because it simply didn’t keep up with the speed at which other economies were improving.

Coming in fourth out of Asean countries is Indonesia , which ranked 50th this year, down five places from 2018. The WEF, however was quick to point out that Indonesia’s economy’s performance remained essentially unchanged from the previous year’s report. A large part of Indonesia’s strength comes from the sheer size of its economy, as the largest in Southeast Asia, but the country also scored high when it came to macroeconomic stability and business dynamism.

Also seeing a dip in its ranking this year was the Philippines , the fifth ranked country in Asean. The Philippines saw a drop in 8 positions compared to last year’s report, now coming in at 64th. This year, India came in at 68th, a drop of 10 places in 2019. This drop, WEF points out however, is only partly the consequence of a relatively small decline in score. More significant was the progress made by several countries ranked close to India.

India ranks beyond 100th on five of the pillars and features in the top 50 of just four pillars. However, it did relatively well in terms of its scores on macroeconomic stability and market size.  India also performs well when it comes to innovation, well ahead of most emerging economies and on par with several advanced economies.

Another weak point for India is in the labour market, which WEF points out is characterized by a lack of worker rights’ protections, insufficiently developed active labour market policies and critically low participation of women. One bright spot for India, as with China, has to do the country’s efforts to boost the environmental sustainability of its economy. As with China, India making big investments in the field of renewable energy.

Bangladesh slipped two positions this year to 102nd. Bangladesh’s competitiveness relative lack of competitiveness is owed partly to weakening macroeconomic stability, deterioration of labour market conditions, lack of ICT adoption and inadequate progress in infrastructure, according to the report. The country’s lack of preparedness when it came to fourth Industrial Revolution technologies was a particularly weak point.And finally, Pakistan slipped by three spots this year to come out at 110th out of 140 countries.The county’s economy scored toward the bottom when it comes to infrastructure, macroeconomic stability, market product, and labour system, but had some relative bright spots when it comes to market size and business dynamism.

Read Next
‘Bambuhay’ breathes new life to poor communities
EDITORS' PICK
What to expect as Metro Manila starts ‘no vaccination, no ride’ policy on Monday
Metro Manila’s daily COVID-19 growth rate drops to 2% — Octa Research
Over 3 Million worth of prizes to be won at Smart Padala’s SENDali Manalo Promo!
SMDC’s Bloom Residences: A master planned community that cares for your health and wellness
COVID-19 cases in PH pass 3.2 million mark with 37,154 new cases — DOH
Upsilon, Unilever give ‘real talk’ on climate change crisis
MOST READ
Thailand records first Omicron death
‘Not my loss’: Did Kris Aquino just comment on her breakup with Mel Sarmiento?
Prince Harry sues for UK police protection
Ivana Alawi tests positive for COVID-19, urges public to comply with health protocols: ‘No one’s above the law’
Don't miss out on the latest news and information.