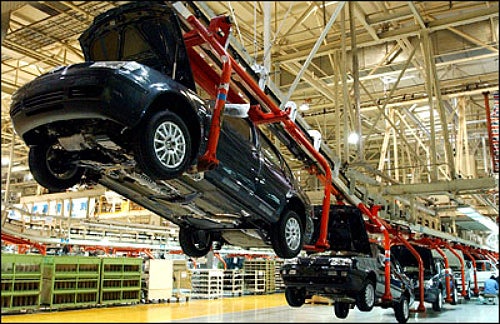 Over a million jobs are on the line in India’s auto industry and with 350,000 of them already gone, India’s chronic job shortage has been accentuated by the massive slowdown in a sector that’s long been a major employment creator.

According to the Society of Indian Automobile Manufacturers (SIAM), the auto industry directly and indirectly employs as many as 37 million Indians.

In September, SIAM released data that shows automobile sector sales declined by 23.55 per cent in August to 1,821,490 units from 2,382,436 units sold during the corresponding month of the previous year.

This came after five consecutive months of double-digit contractions.

Cars account for an estimated for 7.1 percent of India’s gross domestic product and 49 per cent of its manufacturing GDP, according to a 2015 study, reported the Financial Times.

Even the Modi regime’s flagship ‘Make in India’ program was in part premised on the expectation that the country would become a major automobile manufacturing hub and the third-largest market in the world for automobiles by 2020 (according to Deloitte).

India is among the 10 largest automobile producers in the world with an average annual production of 17.5 million vehicles. Before the slowdown, it was on its way to the top five automotive markets by volume globally.

The Modi Administration’s political capital, accumulated after two thumping wins in the 2014 and 2019 General Elections, is being used up at a rapid pace as a result.

Finance Minister Nirmala Sitharaman, who has been copping a lot of criticism for the economic slowdown (GDP growth is down to 5%), was quick to react given the potential the auto crisis has of sparking mass discontent.

The sector, apart from generating direct employment, also provides jobs to millions thanks to ‘backward linkages’ in the vehicle manufacturing industry.

The incentives announced by the government in the past weeks include:

Backing off from both its push for Electric Vehicles (EVs) and disincentivizing diesel/petrol vehicles
Not actioning the proposal by government think-tank NITI Aayog (earlier Planning Commission) for a progressive ban on two-wheelers under 150cc and three-wheelers over the coming 5-10 years.
Delaying introduction of more stringent emission norms to boost sales.
Pushing to June 2020 implementation of the increase in registration charges for internal combustion engine (ICE) vehicles.
Lifting the ban on purchase of new vehicles by government departments and promoting the replacement of old vehicles with new ones.
Iterating that both EVs and ICE vehicles will continue to be registered in future also.
Increasing depreciation value to 30% for all vehicles and formulating a scrappage policy for old vehicles.
Millennials’ Habits or Deeper Malaise?

In a widely quoted and controversial comment made last month, Sitharaman, after a passing reference to the domestic and global economic troubles, said another factor for the dip in car sales was the supposed behavioral change among cab-crazy millennials:

“The slowdown in auto sales is due to several reasons including the change in people’s mindset who prefer cab aggregators like Ola, Uber or public transportation.”

Leading economist and author of the Easy Money trilogy Vivek Kaul, speaking exclusively to Asia News Network, however, pointed out:

“There may be some truth to the millennials as one of the factors for the auto industry crisis but the problem is there just isn’t enough credible data to assert this with any certainty. In fact, there is some research to show cab aggregators themselves are in trouble and not buying new vehicles.”

Kaul makes the larger point that the troubles of the Indian auto sector are systemic and linked to the slowdown of the Indian economy.

“The demand destruction (in the Indian economy) that has taken place over three years has resulted in the auto industry reeling; now, auto sector employees themselves are being laid off, which will put further pressure on the Indian economy,” he told FT.

Kaul put it in perspective: “The slowdown in the automobile sector is a reflection of the income slowdown in the wider economy. Incomes went up at a much faster rate in the 2009-14 period compared to 2014-19.

“It’s being felt now in the auto and other consumer sectors because over the last five years the relative lack of income growth was made up due to borrowings. But consumption feeding consumption only lasts till a point.”

He added that it’s not just car sales which are down but also of two-wheelers – including motorbikes, scooters and even the humble moped – apart from a dip in the purchase of commercial vehicles, vans and tractors.

This clearly points to a secular decline in demand and indicates the slowdown is across income streams.

The auto industry has been lining up for sops from the government.

SIAM President Rajan Wadhera was first off-the-block in thanking the Finance Minister for announcing incentives for the auto sector.

But many experts feel that the industry itself is partly to blame for the crisis.

While Pawan Munjal, chairman of Hero MotoCorp which is among India’s leading two-wheeler manufacturers, went on record to say he “has never seen anything like this (slowdown),” in his 40-odd years in the business, others such as Sunil Alagh, former MD Britannia Industries and now an independent consultant, have been berating the major players for, in effect, whining.

“Auto majors have made massive profits over the past decade; so, if there is a slowdown in the sector, they have to stop unrealistic production targets and hunker down,” Alagh told a leading TV channel.

Vivek Kaul says he and others like him have a point: “The auto sector is now lobbying the government to bail it out just as the Indian construction-real estate sector did in the first dozen years of the millennium. But that ended in a lot of good money being thrown after bad.

“The reason the government is giving them a hearing and has announced incentives is, of course, because of the employment they generate. During recessionary times, companies are focused on their profit-and-loss statements and use conditions to get rid of excess flab. That has political and more importantly electoral ramifications.

“Bail-outs won’t solve the problem. The only way to generate consumption is to put more money in the hands of the people, and the most feasible way of doing so is by income-tax rate cuts and, if possible, a Goods & Services Tax (GST) rate reduction.

“Otherwise, India’s so-called demographic dividend which postulated more and more people entering the job market, earning and spending will continue to unravel especially as borrowings have tailed off too.

“The next quarter GDP figures are unlikely to be above the current 5%. So, for the auto sector, it’s a long haul ahead.

“Even if the government manages to put more money in citizens’ pockets, essentials are likely to be prioritized over luxury/aspirational products.”

The industry neutral corporate tax rates cut announced by Sitharaman recently which gave Indian stock indices a major boost and pushed up share prices of auto majors temporarily, is unlikely to have a major impact on the sector.

“It will improve the ability of corporates to invest but high GST and cess will continue to put the automobile industry at a disadvantage,” wrote Ritesh Kumar Singh, business economist with Indonomics Consulting, in the Times of India on 23 September.

The Opposition has smelt blood even as the government scrambles to deal with the auto crisis and the wider economic slowdown it is both a reason for and the result of.

“A sword is hanging on the livelihood of millions of Indians. The decline in the auto sector is a sign of negative growth in production-transportation and the declining confidence of the market. The economy is falling into a deep abyss of recession. When will the government open its eyes?”

The Congress has also deployed its highly respected economist and former Prime Minister Manmohan Singh to underline the Modi regime’s ‘mishandling’ of a slowing economy in general and sluggish vehicle sales in particular.

There is consensus among economists that collapsing auto sales are a symptom of the hits taken by Asia’s third-largest economy, especially in terms of consumer demand, by three decisions of the Modi government – the 2016 cash ban, the adoption in 2017 of a nationwide GST regime and the financial sector reforms/crisis sparked by the collapse of a highly rated lender.

But there is, equally, wide disagreement among them about the necessity of these steps to secure the country’s economic future.

What is beyond argument, though, is that the steep decline in vehicle sales has steered India on to a rocky road. And it one which, if government predictions of the slowdown being restricted to only one more quarter before the recovery starts are wrong, could mean trouble for it at the hustings.

There are, after all, state elections coming up later this month for Haryana and Maharashtra which, along with Tamil Nadu, are seen as India’s auto hubs.

Amid ECQ, ‘record-high’ unemployment rate of 17.7% posted in April