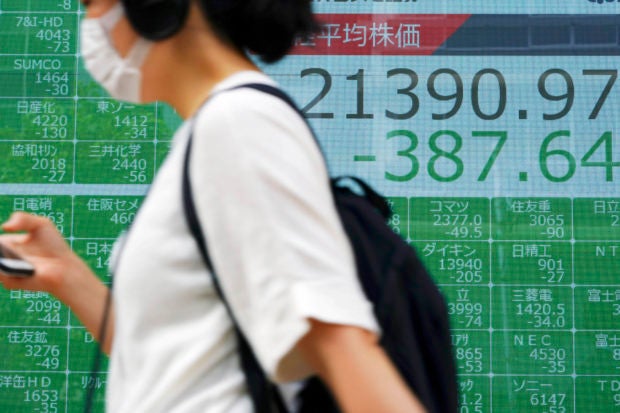 Tokyo’s Nikkei 225 fell by an unusually wide margin of 2% and market benchmarks in Hong Kong, Sydney and Southeast Asia also retreated. Chinese and Korean markets were closed for a holiday.

Wall Street’s benchmark Standard & Poor’s 500 index lost 1.8% on Wednesday after a survey by payroll processor ADP found hiring weakened in September. Investors saw the report “as further proof that the U.S. economy is slowing and possibly on the verge of a recession sending,” Stephen Innes of AxiTrader said in a report.

That added to concern about earlier data showing U.S. manufacturing shrank last month by its widest margin in a decade, and sent markets around the world tumbling.

Adding to uncertainty was a World Trade Organization ruling that cleared the United States to impose tariffs on up to $7.5 billion of European goods to make up for illegal subsidies given to aircraft manufacturer Airbus.

A separate WTO ruling found Airbus rival Boeing Co. received similar improper aid from Washington. The EU is expected to rule next year on possible tariffs Europe can impose in response to that.

Markets already were on edge about whether President Donald Trump’s tariff battle with Beijing, which is weighing on trade worldwide, might tip the global economy into recession.

U.S. and Chinese negotiators are due to meet this month for a 13th round of talks aimed at ending the fight over Beijing’s trade surplus and technology policies. The two sides have made conciliatory gestures including postponing or lifting some punitive tariffs, but there has been no sign of progress toward settling the core issues in the dispute.

Also Wednesday, investors increased their bets the Federal Reserve will slash interest rates at its next meeting to shield the economy from slowing growth abroad and the effects of the trade war.

Markets are pricing in a 75% probability the Fed will cut short-term rates by half a percentage point at its Oct. 29-30 meeting. The Fed hasn’t cut rates by that large a margin since the 2008 financial crisis.

ENERGY: Benchmark U.S. crude gained 13 cents to $52.77 per barrel in electronic trading on the New York Mercantile Exchange. The contract plunged 98 cents on Wednesday to close at $52.64. Brent crude, used to price international oils, lost 6 cents to $57.63 per barrel in London. It fell $1.20 the previous session to $57.69.