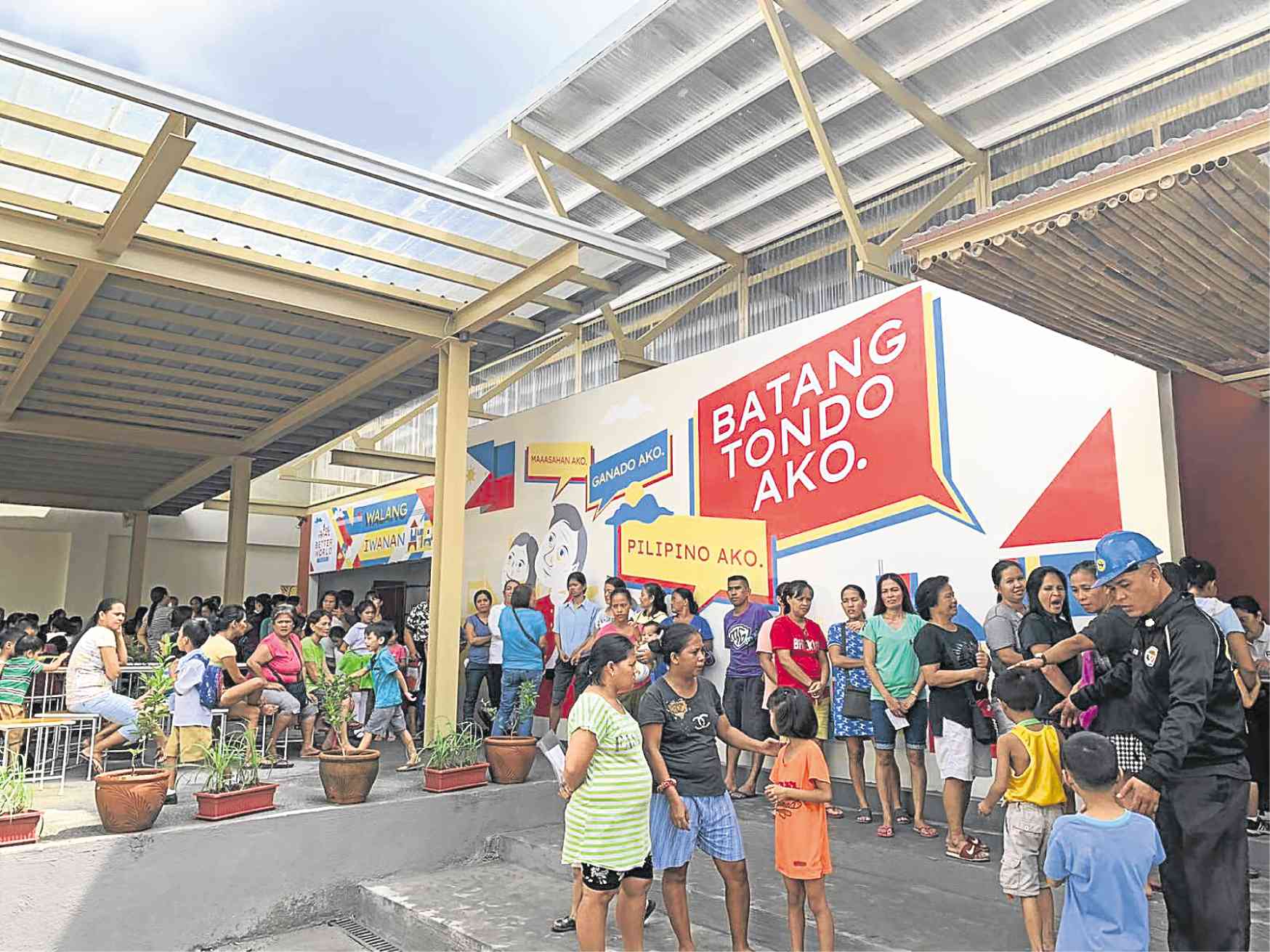 We are gonna love you, people of the world. We are gonna make you a better world,” Ryan Cayabyab once wrote.

Ramon Ang and daughter Cecile Ang seemed to have taken these words seriously. They have just launched the Better World community, comprised of those in Tondo whom they described as “marred by hunger and grinding poverty” but who, with the help of San Miguel Foundation, would now have a better world.

These are the people, including children, who eat “pagpag”—food scraps collected from a dump, then boiled or fried, then eaten with gusto, hygiene and bacteria be damned.

The San Miguel Foundation, the entity behind this project, has converted a 1,000-square-meter warehouse in Barangay 101, Tondo, Manila, into a soup kitchen and community center that will feed the Better World community.

The foundation seeks to address the following: the fact that 66 percent of households in the Philippines are food insecure and that 21.9 percent of these households are severely food insecure. Note, too, that 25-30 percent of foods that pass through kitchens go to waste.

With such huge numbers, even a corporation as large as San Miguel had to collaborate with others. They partnered with Rise Against Hunger, an international foundation committed to ending hunger in our lifetime by “mobilizing a global network of hunger champions.”

“We are creating a food waste footprint that’s hard to ignore,” said Cecile, trustee of the San Miguel Foundation. So food that is otherwise destined to be dumped in a landfill will now be distributed properly, with proper hygiene checks, to the Better World community. They will also be serving those in Happy Land and Aroma Land—temporary housing tenements for scavengers who were forced to move when Smokey Mountain closed—through the program’s soup kitchen and food bank.

The foundation chose Manila as the venue for the Better World community because, aside from the fact that Ramon Ang himself was also a “Tondo boy” and Cecile had memories of her childhood there, Manila ranked as one of the top five cities in the National Capital Region with the highest prevalence of undernourished children under 6 years old. Hence, the need for what Ang calls a food rescue.

“It is a food rescue to address hunger, which is still a major problem for many sectors of our society,” the president and CEO of San Miguel Corp. said.

But his daughter Cecile stressed that the project went beyond food. “While we’re addressing issues of hunger and food waste, we’re not stopping there. We’re also partnering with AHA! Learning Center, a free after school program for public school students,” she said.

The learning program, called “Ang Bago Kong Mundo,” boasts of a curriculum that hopes to mold the students—almost 100 of them from Grades 5 to 6—to become resilient and critical thinkers.

This program reminds me of the efforts of Italian chef Massimo Bottura of Osteria Francescana in Modena, Italy, who once held the title of World’s Best Chef. He is known for his efforts at creating a refettorio—a restaurant where renowned chefs use rescued food to create meals for vulnerable locals. (The word “refetorio” comes from the Latin word reficere, meaning to remake or restore.)

He opened his first refettorio in Milan in 2015 then created Food for Soul in 2016, a not-for-profit organization that aimed “to empower communities to fight food waste through social inclusion.” He has since collaborated with chefs around the world to open refettorios Milan, Rio de Janeiro, London and Paris. He would definitely love Ang’s Better World community project.

It’s heartwarming to see businesses becoming hunger champions. Bravo to the father-daughter tandem and to the San Miguel Foundation. Let’s hope more food companies, hotels and restaurants also contribute. This community must grow not only in Tondo, but in other parts of the country as well.