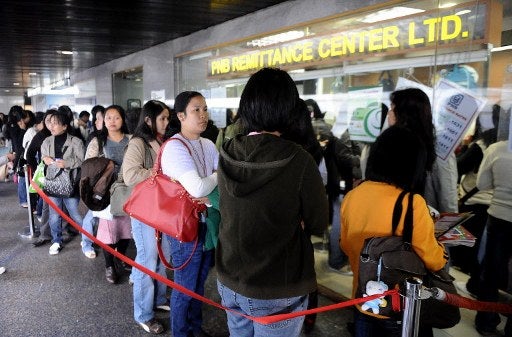 Filipino domestic helpers line up to send money at a remittance center in the central district of Hong Kong in this 2008 file photo. (AFP)

MANILA, Philippines–Dollars sent home to the Philippines by the country’s estimated 10 million expatriates — including an estimated five million Filipinos working with short- and long-term work contracts abroad — rose at their fastest pace in July this year, reversing the previous month’s decline.

According to the Bangko Sentral ng Pilipinas, personal remittances from overseas Filipinos totalled $2.9 billion in July 2019, 7.2 percent higher than the $2.7 billion recorded in the same month last year.

On a cumulative basis, personal remittances for the first seven months of the year increased by 3.6 percent to $19.1 billion from last years’ level of $18.5 billion, BSP Governor Benjamin Diokno said in a statement.

“The steady growth in personal remittances during the first seven months of 2019 drew support from the remittance inflows from land-based overseas Filipino workers with work contracts of one year or more, which aggregated to $14.6 billion from $14.2 billion in the same period last year,” he said.

Inflows from the compensation of sea-based workers and land-based workers with short-term contracts also contributed to this growth and totalled $4.1 billion from $3.8 billion a year ago.

Likewise, cash remittances coursed through banks — which counts only wages sent home by expatriate workers, and excludes funds sent home by non-OFW Filipinos — rose to $2.6 billion in July 2019, 7.5 percent higher than the $2.4 billion registered in July a year ago.

This brought cash remittances for the Jan-July 2019 period to $17.2 billion, 3.9 percent higher than the $16.6 billion recorded in the same period last year.

In particular, cash remittances from land-based and sea-based workers increased by 2.5 percent to $13.4 billion and 8.9 percent to $3.8 billion, respectively.

ADVERTISEMENT
Read Next
US stocks close lower as spike in crude oil rattles market
EDITORS' PICK
SM continues to send relief assistance to remote towns in Batangas
5 years after Mamasapano, son of fallen SAF 44 trooper remembers his ‘idol’
Get exciting deals and discounts when you download the new McDonald’s App
PAL: Passengers with flights to parts of China may request for refund, rebooking
Batangas execs, Taal evacuees thank House; hopeful on rehab efforts
‘A greener, cleaner tomorrow’: A how-to guide for Filipinos who want to help with today’s energy crisis
MOST READ
Seized food items from China tested positive for ASF–BOC
No time for revelry; Tagaytay instead plans for alert level 5
Taal’s sulfur dioxide emission increases
Dina Bonnevie on Coney Reyes: We have forgiven each other
Don't miss out on the latest news and information.

PAL: Passengers with flights to parts of China may request for refund, rebooking