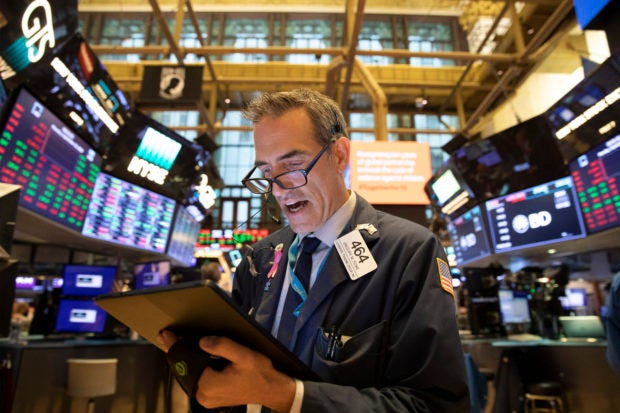 The U.S. and international benchmarks for crude each vaulted more than 14% — that’s comparable to the 14.5% spike in oil on Aug. 6, 1990, following Iraq’s invasion of Kuwait.

The Dow Jones Industrial Average fell 0.5% to break a streak of eight consecutive gains. The S&P 500, while down modestly, had its biggest decline in two weeks. American Airlines was the biggest decliner in the index.

Shares of oil producers jumped, while prices for Treasurys, gold and other investments seen as less risky rose.

The weekend attack halted production of 5.7 million barrels of crude a day, more than half of Saudi Arabia’s global daily exports and more than 5% of the world’s daily crude oil production. President Donald Trump warned that the United States was “locked and loaded” to respond as his administration pinned the blame on Iran, which supports the Yemeni rebels who took credit for the attack.

The attack raised worries about the risk of more disruptions in the supply of oil at a time when the global economy’s strength is seen as shaky.

Still, analysts expressed doubts that the disruption in Saudi Arabia’s oil production would have much of an impact on the U.S. economy, at least in the short term.

“From a global perspective, there’s probably a concern,” said Willie Delwiche, investment strategist at Baird. “From a U.S. perspective, we produce more now than we used to, and our economy is less dependent on oil than it used to be.”

The stock market has been volatile since the summer, as worries waxed and waned about the U.S.-China trade war. The most recent move for stocks had been higher, boosted by renewed optimism in recent weeks about easing tensions between Washington and Beijing, and the S&P 500 had climbed back within 1% of its record.

Stocks lost their recent upward momentum Monday as investors weighed the implications of the attack in Saudi Arabia.

While analysts expected that the attack would only disrupt oil supplies temporarily, the bigger threat is the worry about more attacks in the future.

“At a time when oil markets have been in the shadows of a weak global macroeconomic backdrop, the attack on critical Saudi oil infrastructure calls into question the reliability of supplies from not just one of the largest net exporters of crude oil and petroleum products but also the country that holds most of the world’s spare production capacity,” Barclays analyst Amarpreet Singh wrote in a report.

The spike in oil prices weighed on shares in airlines, whose operations can be hurt by any rise in the price of fuel.

American Airlines Group, which spent $3.7 billion on fuel and taxes in the first half of the year, dropped 7.3%. United Airlines slid 2.8%, and Delta Air Lines dropped 1.6%.

Prices for U.S. government bonds rose as investors moved into safer investments. Yields for bonds fall when their prices rise, and the yield on the 10-year Treasury dropped to 1.85% from 1.90% late Friday. The yield on the two-year Treasury, which moves more on expectations for Fed policy, sank to 1.76% from 1.79%.

Meanwhile, general Motors slumped 4.3% after more than 49,000 members of the United Auto Workers went on strike. It wasn’t clear how long the walkout would last.

Small stocks once again did better than their larger rivals. The Russell 2000 is up nearly 7% since Sept. 4, while the big stocks in the S&P 500 are up only about 2%. If the trend lasts, it will mark a sharp turnaround from the last year, which saw big companies dominate their smaller rivals as worries about a possible recession pounded stocks seen as riskier investments.

That long stretch of sharp underperformance may have created a raft of bargains, some analysts say. Small stocks recently hit their cheapest level relative to the big stocks in the Russell 1000 since the summer of 2003, according to Jefferies.

The week’s headline event is the Federal Reserve’s meeting on interest rates. Investors are confident the central bank will cut short-term rates by a quarter of a percentage point to a range of 1.75% to 2%. It would be the second such cut in two months, as the Fed tries to protect the economy from a global slowdown and the effects of the U.S.-China trade war.

Investors will be looking for clues about what the Fed does next.

“The forward guidance is going to be critical,” said Keith Buchanan, portfolio manager, at Globalt Investments.