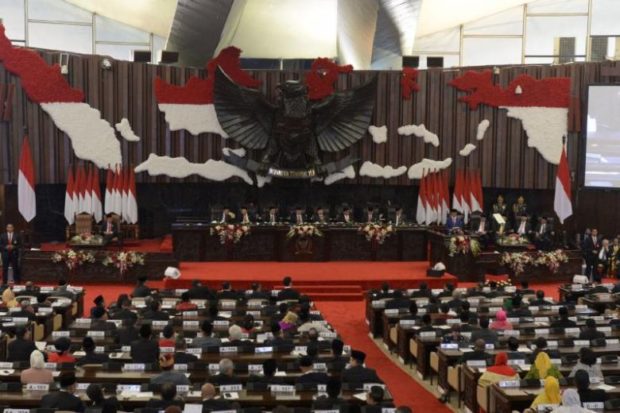 Talk of amending the laws had frequently surfaced in the past years, but always faced opposition from the strong workers’ unions – supported by opposition politicians – who managed to send any draft Bill back to the shelf. PHOTO: AFP

JAKARTA — Indonesia’s top policymakers are now more certain about the need to amend its strict labor laws, which have, for more than a decade, scared away investors because of hefty severance pay and benefits.

Talk of amending the laws had frequently surfaced in past years, but was always opposed by strong workers’ unions – supported by opposition politicians – who managed to send any draft Bill back to the shelf.

But today, the motivation to amend the laws is stronger than ever. The strict laws, passed in 2003, have had a harmful impact on trade and employment, said a senior government official who spoke on condition of anonymity.

Based on government data seen by The Straits Times, Indonesia recorded US$180 billion in exports last year, a little lower than eight years ago.

Its regional competitor Vietnam saw exports surge from US$83 billion in 2010 to US$245 billion last year, thanks to Samsung Electronics, now the biggest firm in Vietnam.

“More than a quarter of Vietnam’s export revenue today is contributed by Samsung, (which) actually wanted to invest heavily in Indonesia, but because of our regulations, they went with the alternative,” the official said.

Samsung set up its first Indonesian mobile phone factory in 2015 to cater to domestic consumers, and has not yet expanded its operations.

It has eight factories in Vietnam and opened a new facility in India last year.

This regulation still applies even if an employee is sacked due to unprofessional conduct such as stealing and fighting. A sacked employee is also entitled to a wide range of severance benefits.

Some companies planning to do a major downsizing to keep themselves afloat had instead opted for bankruptcy, as they could not afford the hefty payouts as a result of laying off staff.

Others that went ahead with downsizing had to sustain net losses in their income statement for three to four years.

Indonesian Employers Association chairman Hariyadi Sukamdani described the labour laws as too favorable to employees – at a high cost to the economy.

He also said the high minimum wages in Jakarta and many other regions have added to business costs.

The city and each of the 33 other regions are required to decide every year – based on a required formula – the increment in the minimum wage for their respective regions.

“Jakarta municipal government officials and those in other places tend to act populist. They do not think objectively. And when they did act objectively and were later faced with street rallies, they easily changed their minds,” Mr Hariyadi told The Straits Times.

Mr Fadhil Hasan, an executive at a palm oil company, agrees that the labour laws are biased towards people who have jobs, giving no protection to the unemployed.

The laws, he said, should instead serve as a policy instrument to encourage, not deter, job creation.

The minimum wage, which is adjusted yearly, should also be based on individual productivity, he added. “Everyone is entitled to this guaranteed yearly increment, regardless of their individual performance. Pay increment should be conditional, depending on one’s productivity.”