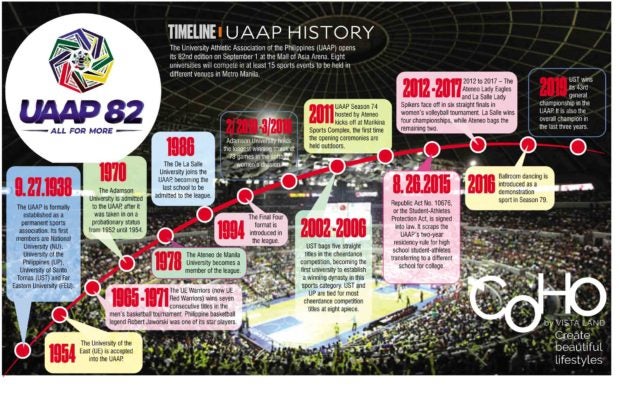 The University Athletic Association of the Philippines (UAAP) opens its 82nd edition on September 1 at the Mall of Asia Arena. Eight universities will compete in at least 15 sports events to be held in different venues in Metro Manila.

1978 – The Ateneo de Manila University becomes a member of the league.

1986 – The De La Salle University joins the UAAP, becoming the last school to be admitted to the league.

1994 – The Final Four format is introduced in the league.

2011 – UAAP Season 74 hosted by Ateneo kicks off at Marikina Sports Complex, the first time the opening ceremonies are held outdoors.

Aug. 26, 2015 – Republic Act No. 10676, or the Student-Athletes Protection Act, is signed into law. It scraps the UAAP’s two-year residency rule for high school student-athletes transferring to a different school for college.

2016 – Ballroom dancing is introduced as a demonstration sport in Season 79.

2019 – UST wins its 43rd general championship in the UAAP. It is also the overall champion in the last three years.