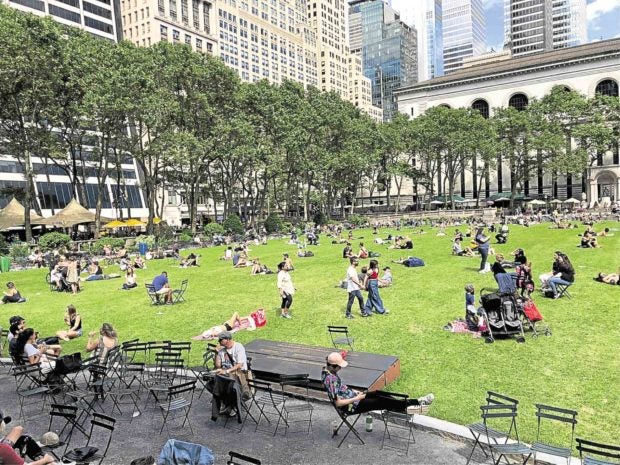 Can one extract economic benefit from open space? The idea of getting financial return from open space is not new. The idea of utilizing green areas to generate value has been a motivation for property developers, given the fundamental attractiveness of the natural environment and man’s biophilia.

Thus, cities, for all their attractiveness as engines of economic growth, are made even more attractive and meaningful by the green spaces located within them. Parks are often at the heart of our cities and contain the shrines of our heroes, places of government, sacred places and gatherings of communities for festivities.

Open spaces are, ironically, both highly treasured and yet without any monetary value —effectively being price-less. And yet, once in a while, when enterprising developers put commercial developments within or near parks, it is considered a desecration. Access to open space is viewed as a fundamental right of urban citizens, an irrevocable asset that cannot be monetized just to benefit the few.

Herein lies the paradox of quantifying the economic benefit of green spaces—putting a price tag on something that is nominally without value while at the same time, symbolically priceless. One thing is hardly argued, however: that urban parks create value and this is done through one of the following means:

Studies that directly link open space to wealth creation are limited. A cursory review of wealthiest cities (based on GDP) and those with the highest proportion of open spaces show no clear correlation, much less any causal link. Even the most livable cities do not necessarily have the most or best parks. 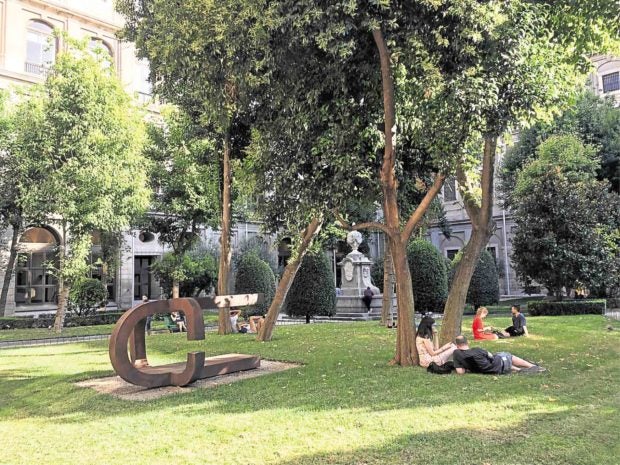 A courtyard in Madrid

Curiously, the wealthiest city in the world, Shanghai, is also among those that offer the least amount of public green space. While a more in depth study using larger data sets is probably needed to establish correlation, this initial overview tends to support the idea that the economic contribution of open space to wealth generation is indirect and not immediately quantifiable. A possible paradigm is to view open spaces not as points in space but as integral parts of social networks.

Extensive research of cities all over the world by the Santa Fe Institute revealed the scaling consistency of cities in terms of efficiency and productivity: doubling a city’s population leads to an increase in economic output and enables increases in innovation.

Cities are essentially made up of two systems namely the physical infrastructure including roads, buildings, utilities; and socioeconomic dynamics pertaining to idea exchange, social capital, culture.

Green spaces are both physical and social infrastructure.

If parks act as physical nodes that attract people to the extent that social capital increases with the number of interactions, then they can enable networks of creativity and innovation to flourish and for productivity to grow. Through this, open space can trigger the necessary productivity that will bring wealth and prosperity in cities.

However, simply providing open space is not a secret ingredient that will guarantee prosperity. Urban open space is but one element in a web of interrelated factors that help a city to attain prosperity. Other crucial ingredients such as diversity, security, liberal governance, strong institutions and many other factors play more fundamental roles in wealth creation. 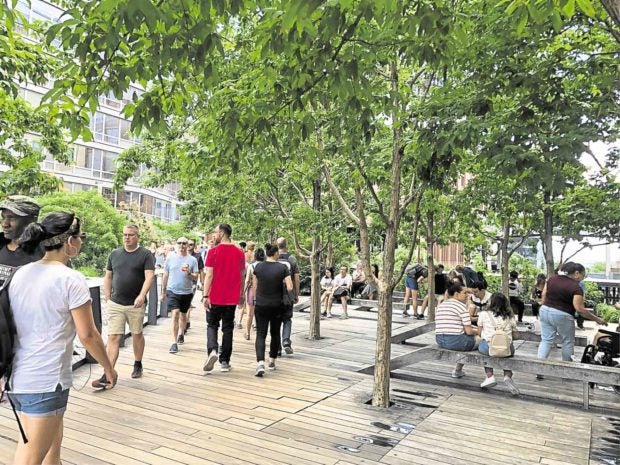 The Highline, NYC: an old railway repurposed into an elevated greenway

Open space, however, may encourage the growth of social capital that foster growth.

The hypothesis is that, if open space contributes to attracting a diverse and large enough population sufficient to evolve a micro-culture that encourages the growth of networks, then it can reach a point of emergence, where the social capital created results in increased economic output.

Urban open space can contribute to economic growth if it is part of a diverse and mobile macro-environment that can scale past a point of emergence.

More important than the provision of open space is the necessity of managing it. Poorly managed open space can attract vagrancy, crime and undesirable behavior that will devalue surrounding properties. Thus, effective urban open space requires proper management, security, a mix of programmed and spontaneous activity.

In conclusion, urban green spaces are among life’s necessities whose benefits are difficult to isolate and quantify.

Their value is derived from the meaning they give life, in both the day-to-day existence of the individual and in the collective interaction of a city’s population.

The author is the founder and principal of Joel Luna Planning and Design (JLPD) and has led the masterplanning of numerous township developments. He continues to design townships and mixed-use estates for several property development companies.