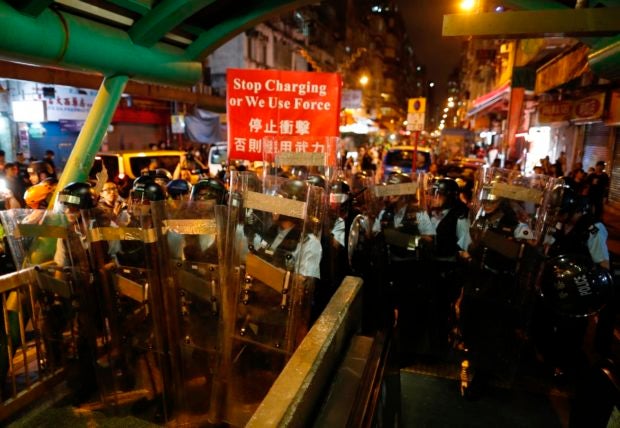 Police move out from the Shum Shui Po police station to confront protesters in Hong Kong on Wednesday, Aug. 14, 2019. German Chancellor Angela Merkel is calling for a peaceful solution to the unrest in Hong Kong amid fears China could use force to quell pro-democracy protests.(AP Photo/Vincent Yu)

Trump also praised Chinese President Xi Jinping, calling him a “great leader” and saying he could quickly resolve the unrest in Hong Kong if he wanted to. “I have ZERO doubt that if President Xi wants to quickly and humanely solve the Hong Kong problem, he can do it. Personal meeting?” Trump tweeted.

Trump has previously said little about the protests in the semi-autonomous Chinese city, except to make it clear he believes that Hong Kong and China need to “deal with that themselves.” He has urged the two sides to exercise caution and voiced hopes that the situation will be resolved peacefully.

His more extensive comments Wednesday came as U.S. stock markets tumbled, in part because of uncertainty over Trump’s trade standoff with Beijing. Investors have also been rattled about the widespread protests in Hong Kong. Flights resumed at Hong Kong’s airport after two days of disruptions that descended into clashes with police.

While Trump has been reticent to take sides, some Republican and Democratic members of Congress have voiced their support for the protesters. House Speaker Nancy Pelosi, for example, issued a statement last week saying that “dreams of freedom, justice and democracy can never be extinguished by injustice and intimidation.”

The demonstrations are against what many Hong Kong residents see as an increasing erosion of the freedoms they were promised in 1997 when Communist Party-ruled mainland China took over what had been a British colony.

Trump said he knows Xi well and called him a “great leader who very much has the respect of his people.”

Administration officials publicly and privately have voiced beliefs that a trade deal is still a ways off even as the president voices frustration about the lack of progress.

Unhappy with the pace of negotiations, Trump announced two weeks ago that the U.S. would apply 10% tariffs on about $300 billion in Chinese imports, beginning Sept. 1.

But the administration moved Tuesday to delay the tariffs on a wide range of Chinese-made products, including cellphones, laptop computers, some toys, computer monitors, shoes and clothing. And it’s removing other items from the list based “on health, safety, national security and other factors.”

Trump tweeted that delaying the tariffs would help China more than the U.S. “The American consumer is fine with or without the September date, but much good will come from the short deferral to December.” /gsg