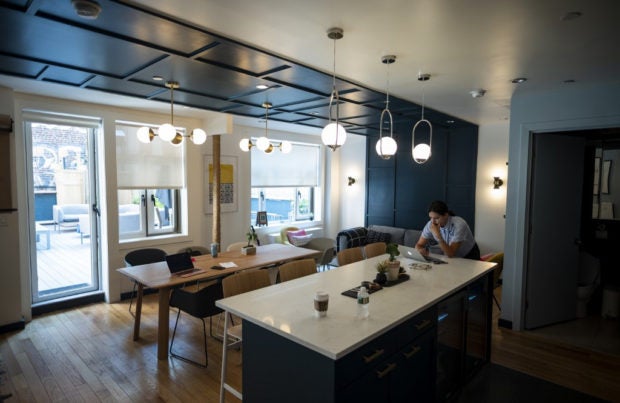 A worker of Quarters uses her laptop in the community living area of Quarters Co-Living in the Lower East Side on July 24, 2019, in New York City. Image: AFP/Johannes Eisele

Nandita Iyer landed in New York, United States from Bombay, India without knowing anyone, but she did not want to live alone in a “sketchy studio.” So instead she opted for a room in a “co-living” unit.

She lives with roommates in one of the 14 apartments in a small building run by the housing start-up Quarters in the trendy Lower East Side neighborhood.

The best part of the arrangement she said, are the common areas, a large kitchen with a big table and comfy couches, a terrace where she can work and a luxurious rooftop patio.

“I met people from such different backgrounds. And I became very good friends with them,” she said.

And she even found mentors to help with her job search.

Group living arrangements are not new. Many people have lived with roommates, in student dormitories or retirement homes.

But with housing costs skyrocketing in major cities and amid changing lifestyles, start-up companies are offering to take care of everything for renters, including the social life of their residents.

Demand for these new group housing arrangements is on the rise, especially among young people aged 18 to 35, the millennials, so more and more projects are appearing on the rental landscape.

Real estate brokers Cushman & Wakefield estimated in May that the major U.S. co-living start-ups had about 3,200 rooms available with 16,700 in the pipeline. The new players include Quarters, Common, Ollie, Starcity, X Social Communities, The Collective and WeLive.

Quarters manages three residences in New York and Chicago and is preparing to grow quickly. Its German-based parent company, Medici Living, just raised $300 million to expand in the U.S. market, in addition to one billion euros to develop in Europe.

“We provide an easy solution for people looking to move into big cities,” said Gil Hirak, head of U.S. operations for Quarters.

From the virtual tour to the signing of the lease, everything can be done online. Then “you just move in with a suitcase,” since units are furnished.

The companies also reduce many traditional sources of friction between roommates by taking care of all the practical details: basic products such as toilet paper, cleaning, Internet or electricity bills.

“During the week, we are so busy. Housekeeping is really helpful,” said resident Eric Tauro, a 29-year-old architect.

After finishing his studies he was “researching what would be the easiest way” to move to New York.

He set his sights on Ollie’s third project in a large new building in fast-growing Long Island City. The start-up occupies a third of floors in the complex, with 422 beds available in 169 apartments.

Amenities are more sophisticated than at Quarters, residents have access to a gym, golf simulator and top floor with open views of Manhattan, Brooklyn and Queens.

Like many co-living providers, Ollie’s boasts that it organizes social events several times a week, like museum visits or cooking classes. It also allows residents to communicate with each other on a dedicated application.

“Millennials do not like to own a lot of things,” said Alex Cohen, real estate agent for Compass. “They want to be part of a community.”

And since they are already at home with services like Airbnb or Uber, “they do not mind sharing” the common areas.

Everything about the projects is geared towards optimizing the use of the space.

“In a normal apartment building, there is so much lost space,” said Sophie Wilkinson, who is in charge of the design for Common.

Their response was to shrink the size of the rooms and expand living spaces like the kitchen.

With smaller rooms, co-living is 15 to 30% cheaper than a studio in the same area, the companies say. But that does not necessarily make them more affordable than a traditional roommate situation.

Noting the rapid rise in popularity of coworking by companies like WeWork, Medici Group spokesman Volker Binnenboese said that “something similar could happen to co-living.”

“We are now focusing on these millennials, but they grow older. We can perfectly imagine doing the same things for young families in our buildings,” he told AFP.

Projects for families could include shared childcare services, for example. HM/JB