BANGKOK – Shares were mostly higher in Asia on Tuesday as envoys from the U.S. and China prepared to resume trade talks, this time in Shanghai. 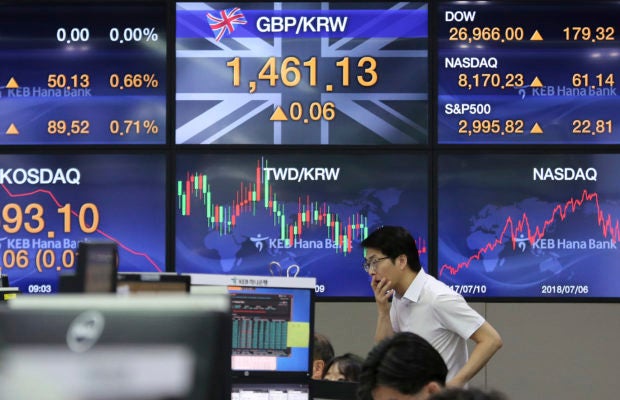 The Shanghai Composite index added 0.7% to 2,960.18 while Hong Kong’s Hang Seng rebounded from losses that followed clashes between protesters and police over the weekend, gaining 0.3% to 28,202.04.

The U.S. and China head into another round of trade negotiations on Tuesday. Investors are hoping Beijing and Washington can avoid another escalation in tariffs like the one that occurred two months ago after talks fell apart.

The gains in Tokyo came despite news that industrial production sank 3.6% from the month before in June. Given uncertainties over global demand and trade disputes, economists have been downgrading their growth forecasts, with the BOJ cutting its own annual growth estimate for the current year by 0.1% to 0.7%.

“The Bank of Japan struck a dovish tone today, promising further easing measures if needed. But we still think it will refrain from lowering interest rates any further,” Marcel Thieliant of Capital Economics said in a commentary.

Major U.S. stock indexes closed mostly lower Monday as investors turned cautious ahead of a key Federal Reserve interest policy announcement and other potentially market-moving developments on tap for this week. That includes the government’s monthly jobs report for July, which will be released on Friday.

Traders expect the Federal Reserve will cut its benchmark short-term rate on Wednesday to help ensure U.S. economic growth in the face of trade uncertainty. Investors are expecting the Fed will cut its rate by a quarter of a percentage point from its current range of 2.25% to 2.50%. That would be the Fed’s first rate cut in a decade.

Investors also will be wading through a heavy slate of corporate earnings reports this week.

ENERGY: Benchmark crude oil rose 31 cents to $57.18 per barrel in electronic trading on the New York Mercantile Exchange. It gained 67 cents to settle Monday at $56.87 a barrel. Brent crude oil, the international standard, gained 32 cents to $63.94 a barrel.