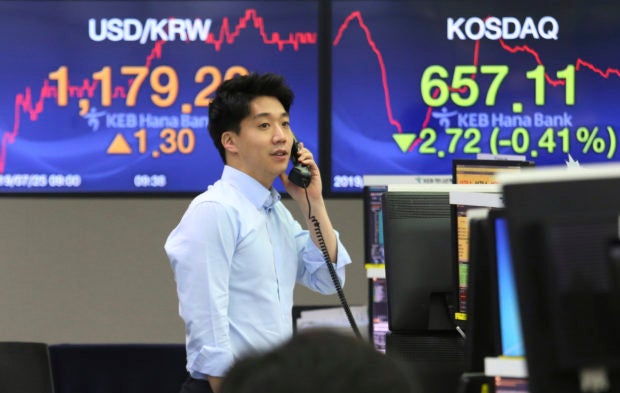 The missiles fired by North Korea early Thursday were the first weapons launches in more than two months and an apparent tactic to pressure Washington as North Korean and U.S. officials struggle to restart nuclear negotiations.

The South’s Joint Chiefs of Staff said the missiles were fired from near the eastern coastal town of Wonsan and flew about 430 kilometers (270 miles) before landing in the waters off the country’s east coast.

Otherwise, there was little in the way of new developments to drive trading, with many investors awaiting policy announcements by the European Central Bank later in the day and from the Federal Reserve and Bank of Japan later in the month.

Boeing and Caterpillar weighed down The Dow Jones Industrial Average, which fell 0.3% to 27,269.97.

ENERGY: Benchmark crude oil added 18 cents to $56.06 per barrel in electronic trading on the New York Mercantile Exchange. It fell 89 cents to settle at $55.88 a barrel on Wednesday. Brent crude oil, the international standard, picked up 12 cents to $63.30 per barrel. Overnight, it fell 65 cents to close at $63.18 a barrel.