CANBERRA, Australia – Papua New Guinea’s prime minister said Monday his South Pacific island nation was open to investment from China, Australia and any other country that is willing to work within the country’s rules. 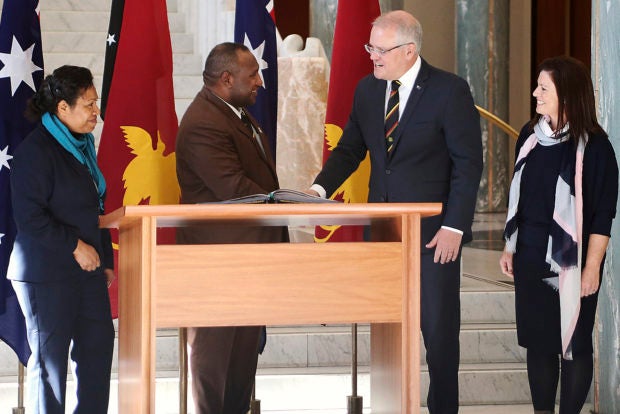 Prime Minister James Marape is making his first visit to Australia since he became leader of its nearest neighbor and former colony in May.

Marape said while Australia was the biggest investor in Papua New Guinea, his government treated all investors equally.

“Whether they are from China or Australia or right across the world is inconsequential and irrelevant to us,” Marape told reporters.

Australian Prime Minister Scott Morrison said his government wanted to ensure that each of its Pacific neighbors were “as independent and as sovereign and are in as much in charge of their future as they possibly can be.”

Marape’s visit comes as Australia attempts to counter China’s growing influence in the South Pacific by teaming with the United States and Japan to finance infrastructure in Pacific island states that the Chinese have aggressively wooed with loans and aid.

Marape said before his meeting with Morrison on Monday that China’s relationship with his nation was none of Australia’s business.

The United States, Japan, New Zealand and Australia announced in November that they will bring electricity to 70% of Papua New Guinea’s people by 2030. Only 20% of its 8 million people, mainly subsistence farmers, currently have power.

Morrison announced on Monday a 250 million Australian dollar ($176 million) investment in the electrification program in the Ramu region.

Marape said Papua New Guinea had no more important bilateral relationship than its relationship with Australia.

The United States and Australia committed to redevelop a Papua New Guinea naval base on Manus Island in an agreement with the previous prime minister, prompting China to caution against “Cold War” thinking. China reportedly wants to establish a naval base in the South Pacific.

The United States is expanding its Marine Corps training hub in the northern Australian city of Darwin — 1,600 kilometers (1,000 miles) southwest of Port Moresby — as part of its strategic pivot to Asia.