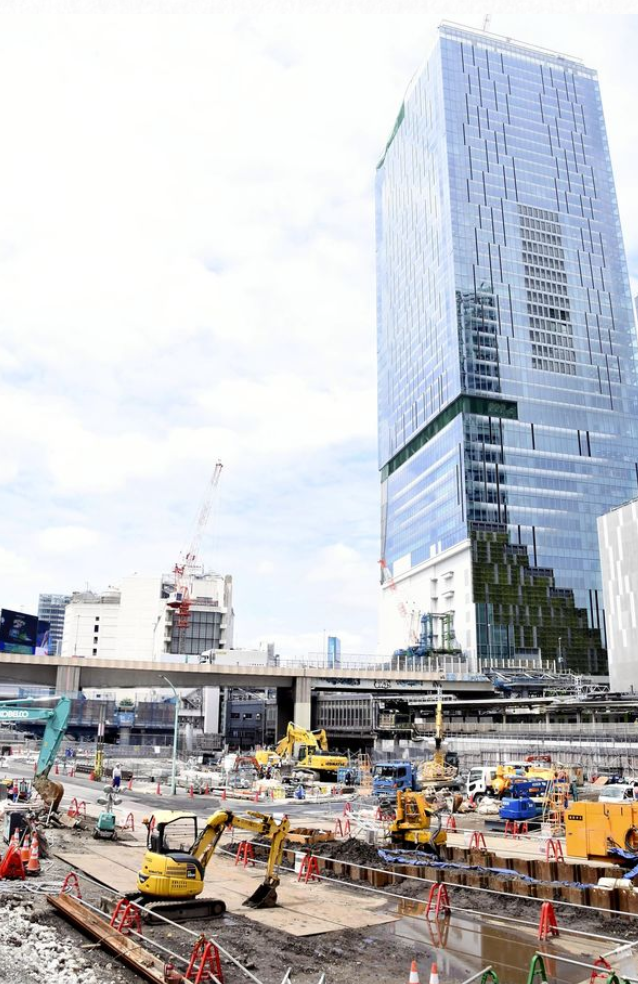 The Sakuragaoka area of Shibuya Ward, foreground, will be directly connected with Shibuya Station and the towering Shibuya Scramble Square building, rear right, which will open in November. The Japan News/Asia News Network

TOKYO — Shibuya Ward in Tokyo is merging back into one distinct entity again on the occasion of the 2020 Tokyo Games, after having been split apart for the last Olympics in 1964.

The Sakuragaoka area on Shibuya Station’s southwest side preserves Shibuya’s original atmosphere, with rows of long-established shops and wooden apartment buildings. Looming large to the south of the station is National Highway Route 246, developed as an arterial road connecting Olympic venues.

Getting to Sakuragaoka requires going up and down pedestrian bridges to cross the national highway, which also represents a large psychological barrier. The current redevelopment will enable direct access to the area from the ticket gates at Shibuya Station.

Shibuya is now in the midst of a redevelopment bonanza. Shibuya Scramble Square, a 47-story complex directly above Shibuya Station, will open this autumn as the highest building in Shibuya. By the end of 2027, about 10 new high-rise buildings will be constructed. It is being called a once-in-a-century development project.

Shibuya has been an important transportation hub since the 1964 Olympics. Competition between the Tokyu and Seibu group companies to build popular department stores also helped make Shibuya a leading center of youth culture.

Shibuya is the perennial birthplace of new fashions, including “DC Brands,” “Shibukaji” (Shibuya casual) fashion and the “Ganguro” trend in which young women sport dark tans and contrasting makeup.

“Shibuya-kei” is a style of pop music that emerged from the area’s import record shops and became popular among young people. Meanwhile, the mini-theater boom was responsible for unearthing and popularizing highly artistic French films. These Shibuya originals represented culture that was distinct from typical Japanese pop music and Hollywood movies.

However, Shibuya has recently seen its influence wane.

According to East Japan Railway Co., Shibuya was the only station among the top 30 busiest stations that had fewer passengers in fiscal 2017 than the previous fiscal year. Shibuya is also behind other areas of Tokyo where large redevelopment projects are under way, such as Roppongi, Nihonbashi and Shinjuku.

Taking it to the streets

Shibuya Station is often called “Shibuya Dungeon.” Railway companies that extend to Shibuya are constantly expanding their lines all across the area, creating a complicating tangle of lines that make it difficult to switch trains.

Making Shibuya barrier-free for the 2020 Tokyo Olympic and Paralympic Games has been a pressing issue, as the station is difficult to navigate for elderly people and those with physical disabilities. Flood prevention measures have also been necessary as Shibuya sits at the bottom of a valley

A 39-story high-rise building will be completed in fiscal 2023 as part of a redevelopment project in the Sakuragaoka area. Shops in business before construction began will reopen on the lower stories of the building in an effort to preserve the traditional atmosphere.

Hiroo Ichikawa, a professor emeritus at Meiji University, said: “[Developers in Shibuya] are trying to get people to leave the buildings and go out into the town to create hustle and bustle. These kinds of efforts will spread to redevelopment projects nationwide.”