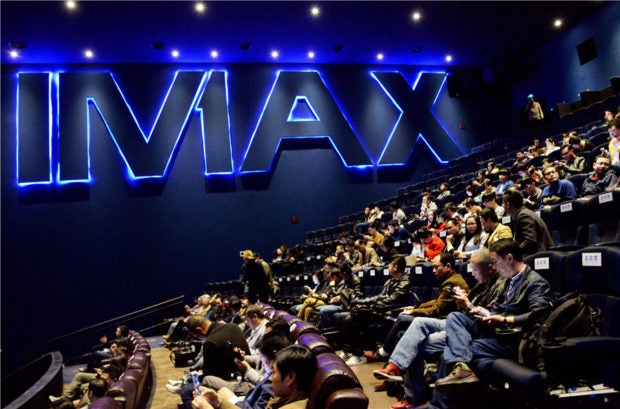 BEIJING — Growing demand by Chinese consumers for quality content and a better watching experience is boosting the local premium film screening market, which should lead to more robust growth of the sector, an industry insider said.

“A growing number of Chinese consumers are seeking premium film watching experiences, and we are working to deliver more quality and differentiated content with our technologies, things that Chinese audiences want to see and want to enjoy,” said Jim Athanasopoulos, chief financial officer of IMAX China.

To date, there are over 600 IMAX theaters across China.

“The tie-up is aimed to leverage the two companies’ resources to promote premium screenings to a wider market in China … as continuous profit has been witnessed in the box office across our theater network this year,” said Athanasopoulos.

Those earnings mark a stark contrast with China’s lower-than-expected box office market. The National Radio and Television Administration said box-office revenue hit 31.17 billion yuan in the first half of 2019 in China, down 2.7 percent year-on-year.

To Athanasopoulos, Chinese audiences’ increasing demand for blockbusters and higher-resolution screens is part of the reason why premium film screenings are welcome.

“We saw strong demand in blockbusters, not only those (from) Hollywood but also Chinese-language films, which are increasingly welcomed by Chinese audiences.”

Athanasopoulos was talking about the science-fiction hit The Wandering Earth during the Spring Festival holiday. IMAX China’s bet on the film garnered earnings of over 300 million yuan from the box office.

“We see that continuing to happen in the future … and that’s part of the reason why we made an expansion plan to tap China’s fast-growing premium film screening market, which we think is taking up a larger share of China’s overall box office market,” he added.

Chen Shaofeng, a professor in culture and entertainment at Peking University, said although IMAX China set an expansion plan, the amount of new cinemas (40) still seems to be modest. “The overall market performance might be an influence,” he added.

“The lower-than-expected box office performance this year is partly because of a drop in cinema visits, particularly in third-and lower-tier cities where demand is weakening,” Chen said.

A rough industry estimate from entertainment analysis website Dengta under online ticketing platform Taopiaopiao shows cinema visits slumped by nearly 100 million to around 807 million in the first half of this year.

The professor was referring to subsidies mainly offered by online ticketing platforms to make ticket prices lower in order to attract audiences.

“It’s understandable that most moviegoers prefer to watch blockbusters in theaters with high-resolution screens and better services to enjoy and watch other movies shortly after they are pulled from theaters on video-sharing platforms, usually few months later,” Chen said.

“As the box office receipts are stagnating, many cinema chains will continue to seek solutions to attract and retain audiences, such as IMAX screenings,” Chen said.