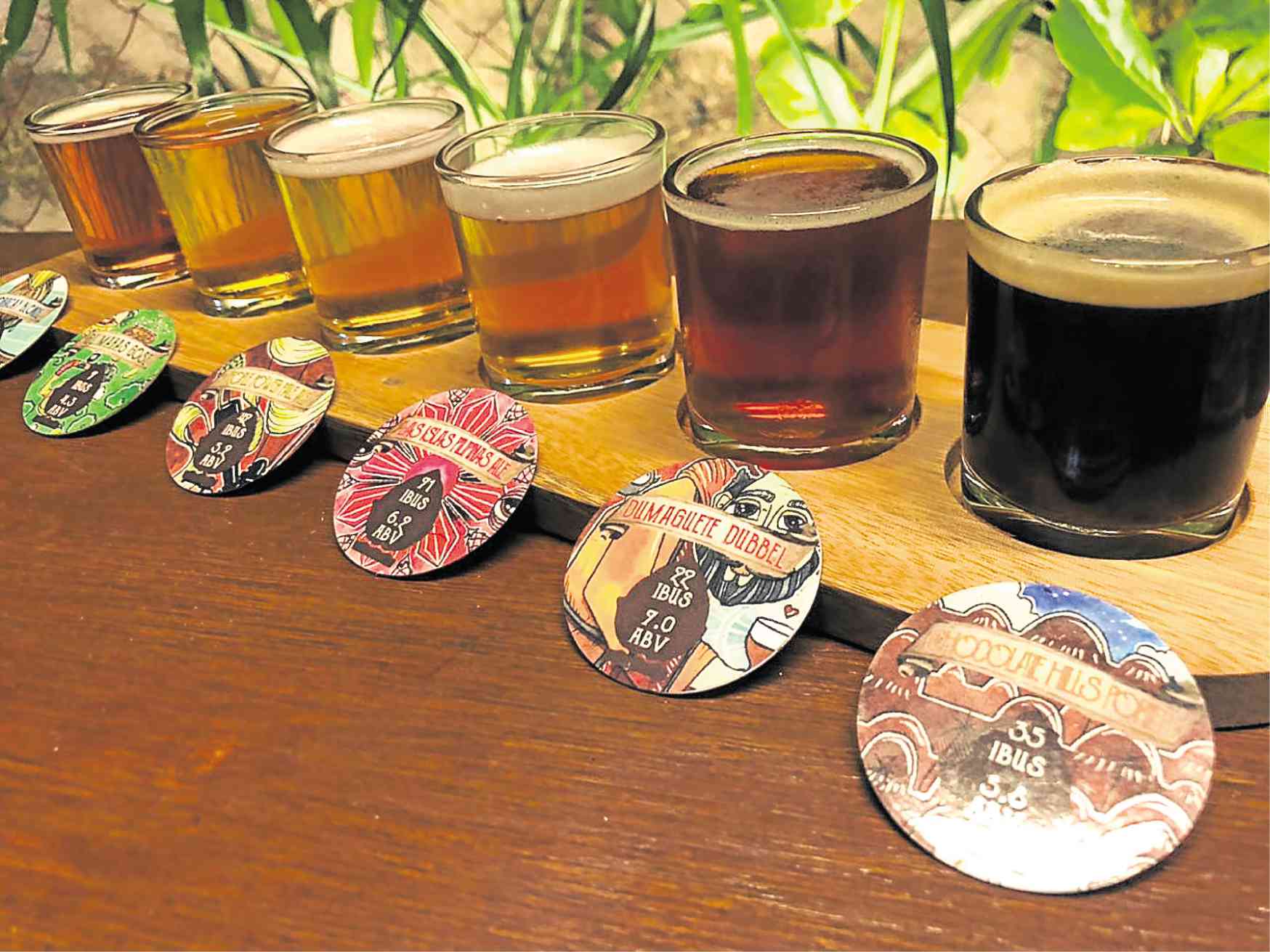 Cebruery is proud to carry over 30 varieties of beer. —CONTRIBUTED PHOTO

Ten friends from Cebu, Siargao, Manila, Brussels and Miami got together in 2014 and turned their common love for beer into a business. Sensing the need to improve the beer scene in the country, they made it their mission “to bring high-quality, locally made, affordable craft beer to Cebu and to the rest of the Philippines.”

Encouraged by the fact that the local market was becoming more discerning, they started brewing their own beer in Mandaue.

Five years later, Cebruery has over 30 varieties of beer, which they claim to be “the largest catalogue of beers in the Philippines—more than any other brewery in the country.” They make ale, pale ale, IPA,  porter, stout, dubbel, tripel, witbier, Scottish wee heavy, marzen, lambic, blonde and dark beer, among others.

You may have even tried some of their beers. The most popular appears to be the Boracay Blonde. A “blonde” or a summer ale is a pale beer that is typically clear, crisp and dry, with low-to-medium bitterness and aroma from hops and a little sweetness from malt. The Boracay Blonde has only 4.5-percent alcohol by volume (ABV). With its crisp and clean finish, this is their bestseller. The owners recommend that this be paired with salads, chicken and custard cake.

Another light beer is their award-winning Guimaras Gose. A gose (pronounced gow-za) is a sour German wheat beer, typically brewed with salt and coriander seeds. The Guimaras Gose, however, is inspired by the Leipzig gose. Leipzig is a city southwest of Berlin from which comes this obscure beer style (tour sites say the Leipzig gose is even hard to find there) reminiscent of Germany’s pre-lager traditions and similar to sour Belgian wheat beer.

Cebruery’s gose has only 4.3-percent but it has character, thanks to the famous Guimaras mangoes, which contrasts the sourness and saltiness characteristic of a gose. This variety is recommended to be enjoyed with sour dishes like kinilaw, yogurt or lemon mousse.

From Guimaras, Cebruery heads to Dumaguete with their Dumaguete Dubbel. A dubbel (as in “double”) is Trappist beer, originally made by Belgian monks. Trappists would make really good brown beer—an example is Chimay—and a stronger version would be called the dubbel, originally brewed in Westmalle Abbey in 1856. Today, dubbels are simply known as strong brown ale with a heavy body albeit with an understated bitterness.

The Dumaguete Dubbel is really strong with 7-percent ABV. It is brewed with local ingredients: Muscovado sugar from Negros, dried cherries, spiced toffee and rum raisin.  The owners recommend this for dishes with strong flavors like smoked ribs.

Next stop on the Cebruery map is Bohol with the Chocolate Hills Porter. A porter is a dark beer, well-hopped and made from brown malt, that originated in London in the 18th century.

Chocolate Hills Porter has the distinction of having been voted the best dark beer in Asia. It is easy to see why: the English porter with 5.8-percent ABV is brewed with caramel, chocolate, black malts, an authentic dose of English hops and large quantities of locally refined Filipino tablea. It has a smooth, rich and creamy taste and I just wish that Manila had this on draft.

Of course, Cebruary would be remiss if they did not have their own Mandaue variety, hence, the Mandaue Marzen. Marzen is a lager that originated in Bavaria. The original Märzen was described as “dark brown, full-bodied, and bitter.” The recipe follows the original Bavarian brewing decree, although it adds authentic German rye malt for a little extra kick and has 5.2-percent ABV.

Aside from these varieties, they also have a People Power Pale Ale, Las Islas Pilipinas Ale, and the latest addition to their menu, the Anniversario, a very strong 11-percent ABV barrel-aged Russian Imperial Stout aged in guava wood soaked in blended scotch whiskey, local coffee, vanilla and tablea.

Other patriotic inspiration include the Crocodile Tears IPA, the Philippine Eagle IPA, and the Big Eye Imperial IPA. Portions of sales from these go to Philippine wildlife conservation.

They also created a “Kahoy Series” (kahoy means wood). Brewers pay homage to the tradition before the Industrial Age when beer was produced, stored and transported in wooden barrels. Cebruery is the only brewery in the country that keeps such barrels to recreate the age-old technique, throwing in a few extra ingredients such as vanilla bean and cocoa.

Cebruery is really upping the ante on beer drinking in the Philippines one great beer at a time.