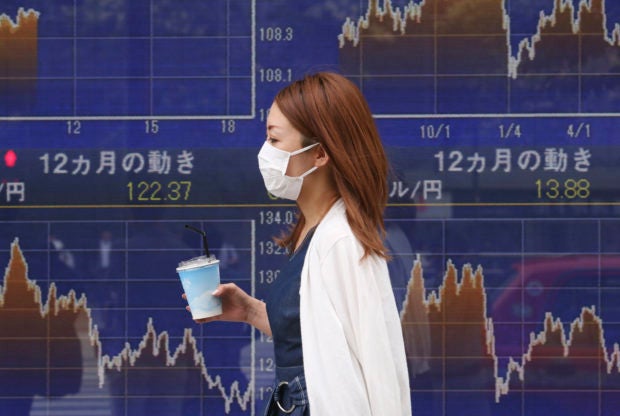 A woman walks by an electronic stock board of a securities firm in Tokyo, Tuesday, July 2, 2019. Most Asian stock markets have risen after Wall Street’s benchmark hit a new high following the latest U.S.-Chinese trade truce. (AP Photo/Koji Sasahara)

The Shanghai Composite Index was off 2 points at 3,042.98 and Seoul’s Kospi shed 0.2 percent to 2,124.94. New Zealand and Southeast Asian markets also advanced, while Taiwan declined.

On Wall Street, the Standard & Poor’s 500 index rose 0.8 percent after Trump’s agreement to hold off imposing new tariffs on $300 billion of Chinese imports put investors in a buying mood.

Tokyo and Sydney rose, while Shanghai was unchanged. Hong Kong rose strongly in early trading despite protests over a proposed extradition law that prompted police to use tear gas to clear streets.

Investors were encouraged by the agreement between Presidents Donald Trump and Xi Jinping of China at a weekend meeting of the Group of 20 major economies to resume trade negotiations.

That optimism came despite forecasters’ warnings the two sides still face the same differences that caused talks to break down in May.

Also Monday, the Trump administration ratcheted up tensions with the European Union by proposing additional tariffs on $4 billion of European imports in a dispute over subsidies to aircraft manufacturers.

Investors “may find this optimism cooling,” Jingyi Pan of IG said in a report. “The sustainability of this upward movement remains in question with the uncertainty continuing for geopolitical tensions.”

Investors worry the fight over Beijing’s technology ambitions will drag on global economic growth. Those concerns prompted the Federal Reserve last month to declare its willingness to cut interest rates if the dispute hurts the U.S. economy.

The trade truce leaves 25% import taxes imposed by the U.S. on $250 billon of Chinese imports in place. And China maintains the tariffs it placed on $110 billion in American goods, primarily agricultural products.

Trump also said he would allow U.S. companies to sell some components to Chinese telecommunications giant Huawei, which last month was placed on an American blacklist as a national security threat.

Technology stocks and banks accounted for much of Monday’s gains Monday as traders turned their backs on more defensive holdings. Utilities and real estate stocks lagged the market in a sign of Wall Street’s bigger appetite for risk.

Chipmakers rallied on plans by the U.S. to loosen some restrictions on sales to Huawei. Broadcom climbed 4.3% and Micron Technology gained 3.9%. Apple and Microsoft also rose.

ENERGY: Benchmark U.S. crude fell 24 cents to $58.85 per barrel in electronic trading on the New York Mercantile Exchange. The contract rose 62 cents on Monday to close at $59.09. Brent crude, used to price international oils, lost 16 cents to $64.90 per barrel in London. It gained 32 cents the previous session to $65.06.