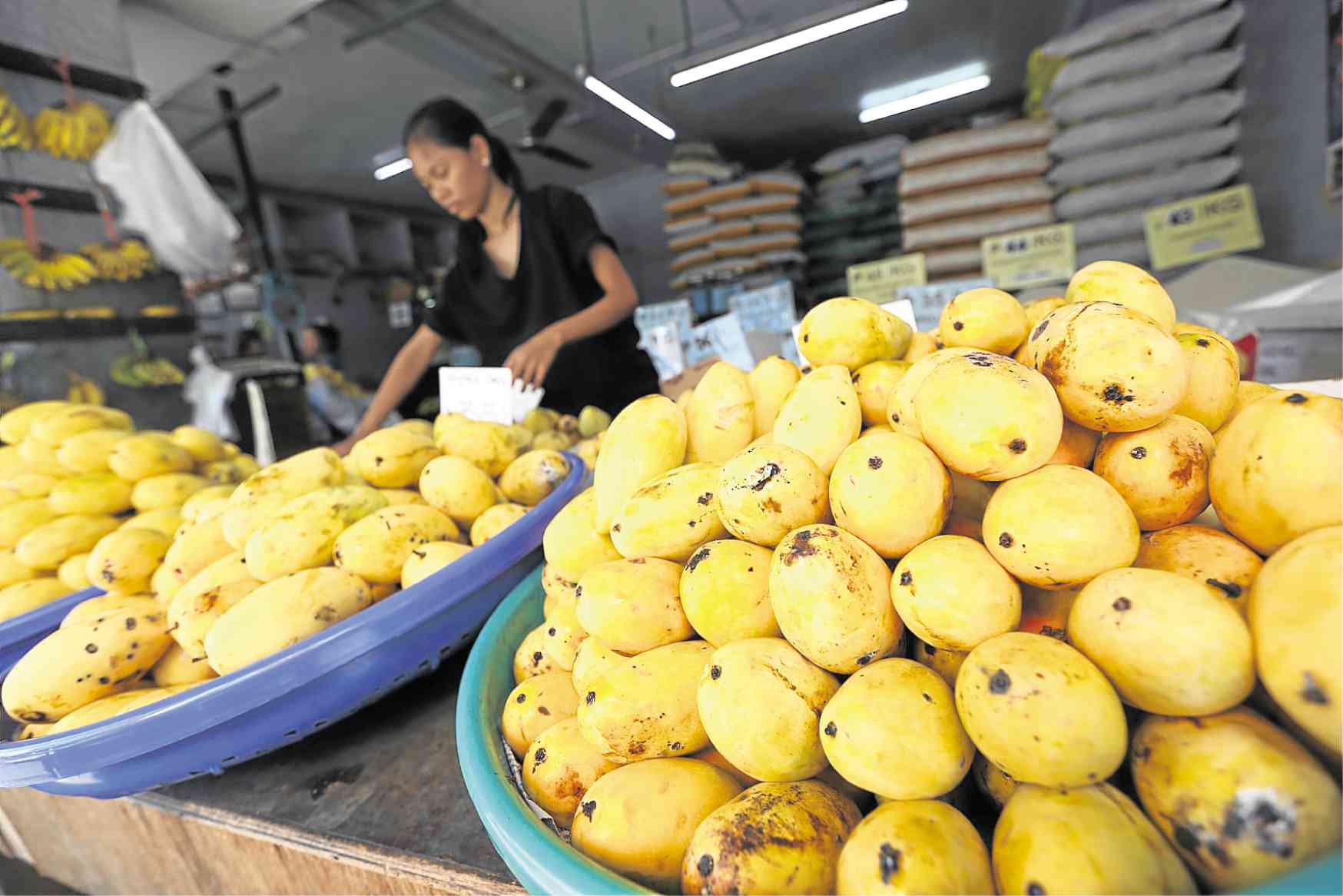 Sweet mangoes from Pangasinan sell at P70 a kilo near Kamuning Market in Quezon City. Prices have gone down because of excess supply. — NIÑO JESUS ORBETA

The unusually abundant mango harvest from his farm left Ricardo Tolentino with a bitter taste in his mouth.

It’s not that his farm yielded a bad crop. Rather, the contrary.

Warm and dry conditions brought about by the El Niño weather phenomenon proved too favorable for growing mangoes that he is now left with an oversupply.

“The voluntary flowering of mangoes has been massive because of El Niño,” said the 63-year-old farmer, who also leads the United Luzon Mango Stakeholders Association. “There’s really no way to absorb all the produce.”

Tolentino, or Mang Carding to his fellow farmers in Laoag, Ilocos Norte, still has more than 5,000 kilos to spare from his farm, but the farmer-leader noted that other provinces have it worse.

Across the country, mango farms produced an extra two million kilos, a million of which were already left to rot with no market to cater to.

In Isabela, Cagayan, Ilocos Sur, and Abra, the mango glut was so severe that farm-gate prices dipped to as low as P5 a kilo and were being retailed for P15 a kilo in public markets.

Other farmers just altogether stopped picking the tropical fruit—a worldwide favorite for its sweetness —and just let them rot.

“These are hard times, farmers are really suffering from the recent harvest,” Mang Carding said. “The prices are not even enough to cover our production costs.”

The bittersweet situation of these mango farmers is not unique, but distressingly ordinary.

Last year, vegetable growers in Cordillera also sold their produce at losing rates after a bumper harvest, while Nueva Ecija farmers were forced to let their onions rot given the severe lack of cold-storage facilities to accommodate surplus.

But these stories of wastage may have struck a chord with Filipino consumers, such that the story of our local mango growers may end differently this time.

A few days after the Department of Agriculture announced the massive excess in Philippine mangoes, the bayanihan spirit emerged from both public and private entities who have decided to rally behind a sweet cause—that is, to help farmers minimize their losses by providing them new markets.

For one, the DA has embarked on an aggressive campaign to sell mangoes in the metro, where more Filipinos are willing to spend more.

Beginning June 10, stalls provided by the agency will be put up all over the nation’s capital region where farmers could sell their produce at P25 to P50 a kilo depending on the quality and the volume.

Interested consumers may troop to the Bureau of Plant Industry in Manila and to the DA headquarters in Quezon City, while the local government units of Muntinlupa and Parañaque will also provide spaces in their city halls to accommodate the farmers’ produce.

Supermarket chain WalterMart will also provide free spaces for farmers in their branches in North Edsa, Makati City and in Pasay City.

DA’s Agribusiness and Marketing Services director Bernadette San Juan said an initial 14,000 kilos of mangoes would be waiting for consumers in these booths, but the number is expected to swell as more farmer cooperatives and associations are reaching out to the agency for help.

Local mango processors have also agreed to ramp up their purchases of the world renowned fruit, while some offered to provide storage facilities.

Chef Jam Melchor, founder of the Philippine Culinary Heritage Movement, earlier called on the media and his peers in the food industry to shed light on the mango crisis, which, according to DA’s focal person Annray Vilota Rivera, has been so effective that demand for the tropical fruit has already surged.

“There are still a lot of Filipinos who are kind and extended their help to us,” she said. “God is good that He sends people to help.”

Mango farmers may not gain the sweet profit they were expecting after a season’s worth of toil in the fields, but Filipinos coming together to aid the industry is a start.

The DA is also in the process of expanding and opening new export markets for mangoes, with Hong Kong and Dubai already being tapped to receive more shipments.

Melchor on his Facebook page said Filipinos should “not wait for the time when our farmers will give up on us,” adding that the Philippines “have the best mangoes in the world—sweet, velvety, soft, and scandalously succulent.”

“What Filipinos do not realize is how significant farmers are to the country’s food security. If farmers were prioritized and given enough significance, the economy of the Philippines may have boomed a long time ago,” he said.

Stakeholders in agriculture have long been crusading for the government to broaden the sector’s market both here and abroad, and to efficiently distribute food commodities across the country to fill demand in places where there are no supplies to avoid wastage.

The DA, for its part, has laid out long-term plans to address these issues by crafting several roadmaps for various agricultural commodities including mangoes, but these proposals have yet to bear fruit.

Tomorrow, Manong Carding will be sending his son Enrique to Manila to bring their farms’ produce to the DA office, with the hope that the government will be true to its word and provide better opportunities for farmers like him.

With the right policies and proper planning, mango farmers are optimistic that the next harvest will yield profit that are just as sweet as the produce they reap. If not better.