Resorts World Manila (RWM), the Philippines’ first integrated entertainment and tourism destination, continues its streak in garnering international recognition for its innovative work with its fresh crop of six trophies from the 2018 Asia-Pacific Stevie Awards.

The Asia-Pacific Stevie Awards, is one of the world’s premier award-giving bodies for business innovation. This is the third year in a row that RWM has been recognized by the Stevies, and the year that it has received the most trophies for its various projects and programs. 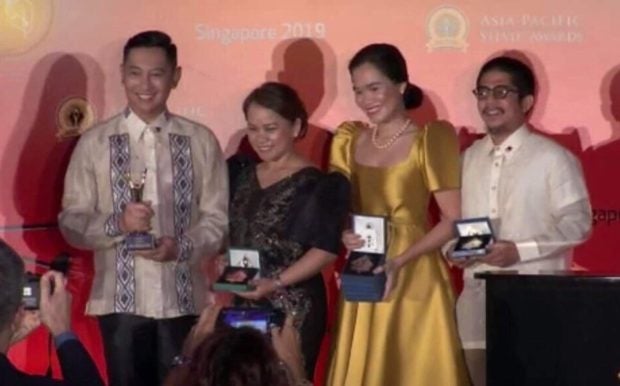 It earned a Gold Stevie for “El Bimbook” – the souvenir programme for its hit Filipino musical theater production Ang Huling El Bimbo in the Award for Innovation in Other Types of Publications Category. The El Bimbook was noted for its creativity in going beyond the usual playbill format by taking inspiration from the musical’s plot  and giving the programme more substance by modelling it after a college yearbook.

RWM also received a Silver Stevie Award for Innovation in Brand Development for its production of the social media video Luta Biay (Soil Life), as part of its Lucky Person of the Year (LPOY) Award initiative. The LPOY Award is done in partnership with one of the Philippines’ foremost society magazines, PeopleAsia, which gives out annual People of the Year awards for the country’s movers and shakers in various fields. RWM’s LPOY Award sought to recognize individuals whose hard work were able to uplift communities, and inspire others. Last year’s awardee and the subject of Luta Biay was Norman King, the first Aeta graduate of the University of the Philippines.

The company also earned two Silver Stevies in the Award for Innovation in HR Management, Planning and Practice for its Sama-Salo and ThrillChella employee engagement initiatives. Its fourth Silver Stevie was for the RWM Mobile App which allows RWM members to receive real-time updates on RWM events and promotions, as well as allowing them to maximize their memberships through exclusive app-only deals.

Rounding up the slew of awards is a Bronze Stevie Award for Innovation in the Use of Video for its “Kaya Natin ‘To” Music Video which was created to inspire stakeholders to believe in the RWM vision after a challenging event.

“We’re very happy to receive these awards not just because it validates our hard work,” says Joee Guilas, RWM Director for Corporate Communications. “RWM has always been committed to championing the Filipino and we believe that by proving that we are able to produce international award-winning work, we are showing everyone that the Filipino is truly world class.”