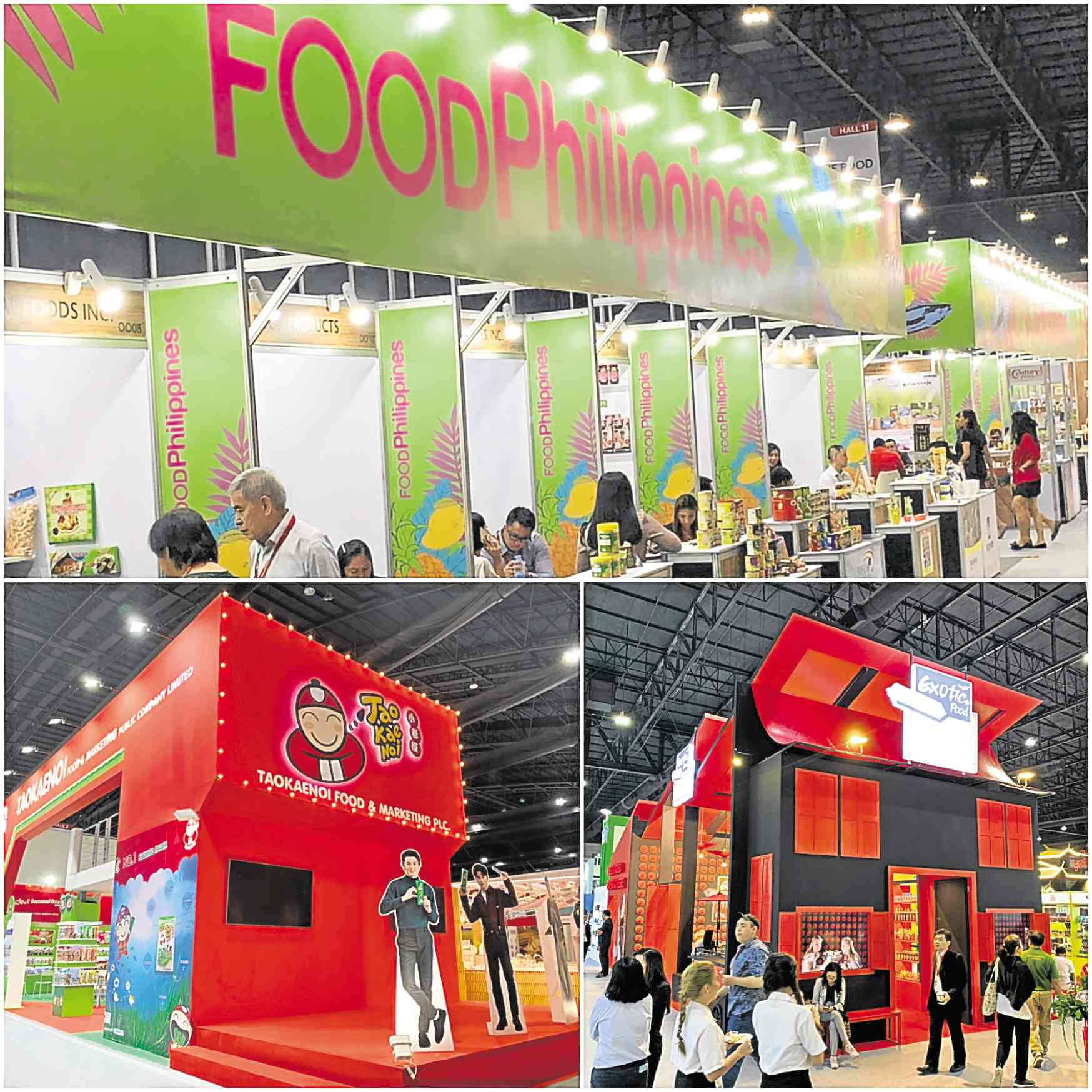 Top: Philippine exporters participated with almost 30 exhibitors at this year’s Thaifex, joining over 2,700 exhibitors from around the world. Below: the larger-than-life stalls of participating exhibitors at Thaifex 2019. —Photos by Margaux Salcedo

It’s true. No one does food expos—at least in Asia—better than Koelnmesse and the Department of International Trade Promotion (DITP) of the Ministry of Commerce of Thailand.

The Koelnmesse Group is an economic trade show powerhouse that stages approximately 80 international trade fairs and over 2,000 conferences around the world for industries ranging from art to motoring to gaming to furniture to food and even dentistry, among others, in annual or biennial cycles. Thaifex was organized by Koelnmesse in partnership with the amazing DITP of Thailand.

I wrote about Thaifex last year but even as a returning visitor, I am still overwhelmed by how huge and magnificent this food expo is. And next year promises to even be bigger and better.

The event, which took place from May 28 to June 1, was held at Impact, a large exhibition center in Bangkok with 11 exhibition halls stretching 107,000 square meters or about 200 basketball courts. Another way to imagine how big it is: The SMX Convention Center in Manila has a total of 17,480 square meters of leasable space, thus Thaifex is six times bigger.

The massive space was filled up by over 2,700 exhibitors from 42 countries and regions, making it Asia’s largest dedicated F&B trade show, and with over 67,000 trade visitors from all over the world.

Next year, Thaifex will be rebranded to become Thaifex-Anuga Asia and, with the reputation of Anuga, we can expect an even bigger and better expo. Anuga, which celebrates its 100th anniversary this year, is the world’s largest F&B trade show, with space twice the size of Thaifex (284,000 square meters compared to Impact’s 107,000 sq m) and exhibitors almost three times the size of Thaifex (7,400 exhibitors compared to Thaifex’s 2,700). Be prepared to be overwhelmed.

I say that no one does expos better than Koelnmesse and Thailand’s DITP not only because of the sheer size or number of participants at Thaifex but because the organizers understand that an expo is more than just a platform or a venue for showcasing products—that what is important for participants is the business that they take home.

Aside from engaging exhibitors, both Koelnmesse and Thailand’s DITP invest in bringing in buyers who meet the exhibitors and/or personally go to their stalls with a serious interest in purchasing products.

Note that the organizers don’t just invite buyers, they invest in them. Koelnmesse and Thailand’s DITP fly in the buyers by sponsoring their flights and accommodations, just for them to participate in Thaifex.

This year, Koelnmesse flew in over 80 buyers from the Asia Pacific region for the benefit of Thaifex’s international exhibitors while the Thailand government and Chamber of Commerce adopted over 2,000 buyers from around the world.

More importantly, the buyers are not just random companies but are carefully selected.

Wendy Lim, general manager of Koelnmesse, shared, “We have a very extensive Hosted Buyer page on our website with a registration form from which we collect submissions from buyers who think they are top buyers, then we do approvals on a weekly basis.”

The organizers diligently check if these buyers are actually buying products that are relevant to the show, sometimes going to the extent of visiting the buyers in their home countries.

“It is an extra service that we offer for free,” Matthias Kuepper, managing director of Koelnmesse, explained over lunch at Thaifex. “But we feel it is a worthwhile expense because it gives participants that guarantee to meet buyers.”

Lim added, “It’s not just about increasing the numbers of exhibitors or increasing the space of the show. Exhibitors will return if they make real business contacts at the show. So for us, for the last three years since the program started, this is a very important part of the expo. This platform, where exhibitors get to meet top buyers, is an integral part of Thaifex.”

It is really a brilliant program that ensures the quality of the exhibitors’ audience. Through this program, Thaifex is able to guarantee that the larger-than-life stalls of exhibitors are visited not only by curious spectators but by personalities or company representatives who will translate the showcase into actual sales and possibly long-term relationships, investments, exports and partnerships.

Thaifex improved this program further this year by creating a portal that allowed a streamlined matching of exhibitors and hosted buyers. Two weeks before the event, registered buyers could already log on to the site to choose 16 companies they were interested in, whom they were given the opportunity to have a meeting with for 20 minutes in the two-day program of marathon meetings between exhibitors and buyers.

Through this program, Thaifex has been able to make the negotiating table for importers and exporters come to life at unprecedented levels. 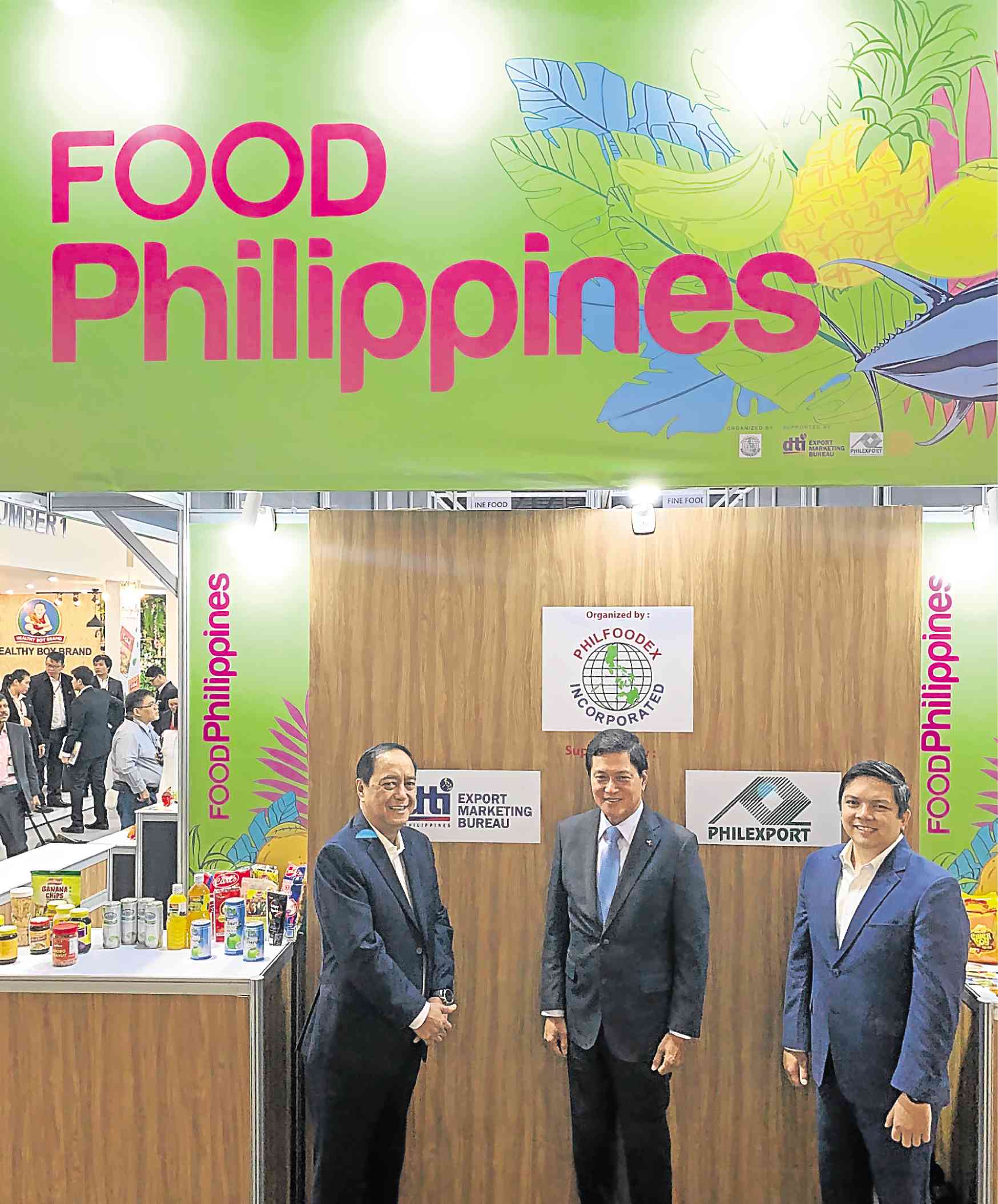 On the exhibitor side, Thaifex stays at the forefront of exhibiting the latest food trends in Asia with new exhibition zones.

The first one that piqued my interest was the Future Food Experience, which was a showcase of trends and innovations in F&B— not only food products but also revolutionary technology changing lifestyles and habits relating to food production and consumption.

A truly futuristic company featured was Fling Asia, which explores the possibility of drones for different solutions, i.e., drones delivering food. Another organization, the Asian Food and Feed Insect Association (AFFIA), is exploring mass marketing insects as the food of the future.

Another featured zone was the Thaifex Startup, which is a new platform for startup companies to show their innovative, game-changing products to possible investors or venture capitalists.

Around 30 exhibitors from the Philippines participated, with a demo in front of one of the main halls promoting Asean food by the charming Filipino-Thai Mai Vannaying of Akara Hotel on how to cook Thai food using Filipino products and ingredients. Director Perlada emphasized the DTI was positioning Filipino food products so that these could be appreciated not only by Filipinos around the world but by various international markets as well.

Everything looks rosy and promising for the future of food. These are truly exciting times for the food industry.