BANGKOK – Shares edged higher in Asia on Wednesday after a rebound in technology stocks helped power an overnight rally on Wall Street.

Investors snapped up technology shares after the U.S. government opted to temporarily ease off on proposed restrictions on technology sales to Chinese companies. 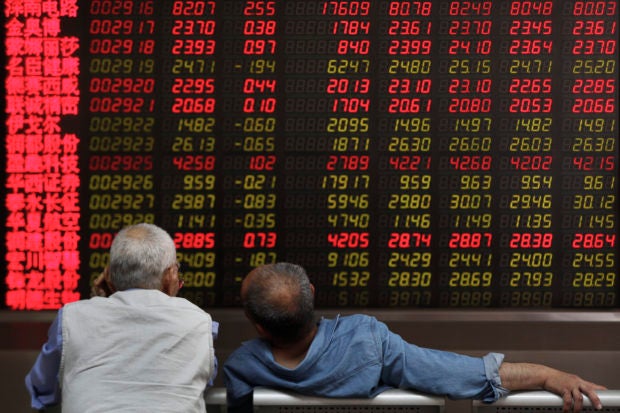 Investors chat as they monitor stock prices at a brokerage house in Beijing, Wednesday, May 22, 2019. Shares edged in Asia on Wednesday after a rebound in technology stocks helped power an overnight rally on Wall Street. (AP Photo/Andy Wong)

The Shanghai Composite index lost 0.5% to 2,891.70. Shares fell in Taiwan and Jakarta but rose in Singapore and Thailand.

Japan reported that its trade surplus dropped 90% from a year earlier in April as a 6% drop in shipments to China bit into its exports.

Exports fell 2.4% year-on-year while imports rose more than 6% thanks to higher oil prices. But that gloomy news was balanced by a rise in machinery orders.

On Wall Street on Tuesday, the U.S. government’s decision to issue a 90-day grace period on controls on technology sales to Huawei, ZTE and other Chinese companies offered a respite from worries over their potential impact.

Though the 90-day delay brightened sentiment, “the reality is that a resumption of the limitations after 90 days would most certainly still affect the global supply chain and hit hard at a touchy issue for China to potentially induce further retaliation,” Jingyi Pan of IG said in a commentary.

The Trump administration’s sanctions against Huawei and other Chinese technology companies have begun to bite even though their dimensions remain unclear.

U.S. companies such as Qualcomm and Broadcom that supply the Chinese tech powerhouse with computer chips face a drop in sales, and Huawei’s smartphone sales could get decimated with the anticipated loss of Google’s popular software and services.

ENERGY: Benchmark U.S. crude slipped lost 66 cents to $62.47 per barrel in electronic trading on the New York Mercantile Exchange. It lost 8 cents on Tuesday to settle at $63.13 per barrel. Brent crude, the international standard, shed 49 cents to $71.69 per barrel.