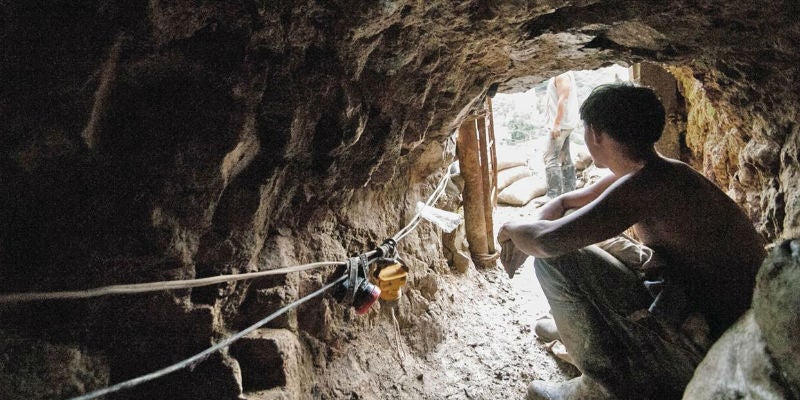 POT OF GOLD A small-scale miner takes a break after taking out sacks of gold ore from a tunnel at the Acupan mines in Itogon, Benguet province. But there is still no light at the end of the tunnel for cutting taxes on gold sales. RICHARD BALONGLONG / INQUIRER NORTHERN LUZON FILE PHOTO

Duterte signed Republic Act 11256 or “An Act to Strengthen the Country’s Gross International Reserves” on March 29, but a copy of which was released to the media only on Wednesday.

The new law also exempts registered small-scale miners who would sell gold to accredited traders for eventual sale to BSP from paying income and excise taxes.

It said all gold sold to BSP by accredited traders shall be presumed to have been purchased from small-scale miners.

Additionally, RA 11256 provides that those who already paid their excise tax prior to the sale of gold to BSP may file a claim for refund or credit with the Bureau of Internal Revenue (BIR).

The President tasked the BSP governor, environment secretary, and interior secretary together with the BIR commissioner to draft and recommend to the Department of Finance the implementing rules and regulation of this new decree within 60 days from its effectivity.

In a statement, BSP said the new law “would allow the BSP to increase its purchases of domestic gold to further build up the level of the Philippines’ gross international reserves, which serves as the country’s primary buffer against external economic shocks.”

It also said the new law aims to remedy the 99-percent drop in BSP’s domestic gold purchases from more than 900 thousand fine troy ounces (FTO) in 2010 to around 10  thousand FTO in 2019 as a result of the taxation of the sale of gold to the central bank beginning July 2011.

“An increase in BSP’s gold purchases using pesos leads to a net increase in the gross international reserves, thereby improving the country’s economic standing and lowering the cost of both funding for the Republic as well as doing business for the private sector,” it added.

More importantly, BSP noted, the new law will also help prevent the smuggling of Philippine gold through the black market to other countries and allows small-scale miners and traders to sell gold at international market prices.

While the National Government would only forego around P35 million annually from its income on BSP’s gold purchases, the Philippines as a whole is expected to benefit from keeping the gold right in the Philippines for sale to BSP, the central bank explained.

“Aside from helping build up the foreign reserves of the country, the law is expected to also lead to greater availability of gold in the domestic markets for jewelry making, dental requirements and other industrial and commercial uses,” the regulator added.

The central bank has been lobbying for the return of this tax-exempt status since 2012 when the Bureau of Internal Revenue stated levying a 2-percent excise tax and a 5-percent withholding tax on all gold sales to the regulator. That year, gold sales to BSP – the only officially accredited buyer of gold from local miners – fell to zero as both large and small mining operations opted to sell their output on the black market due to more attractive prices offered there. (Editor: Katherine G. Adraneda)

Read Next
Wanted: Best of the best in Hotel Sales and Marketing for Virtus 2019
EDITORS' PICK
Palace says ICC prosecutor report is ‘fantastical,’ based on ‘hearsay’
Smart brings KCON:TACT especially 4U to subscribers from June 19 to 27
Kai Sotto, Angelo Kouame lead Gilas final 12 vs South Korea
Ready, get set, travel: NCR Plus tourists now free to visit MGCQ areas
Synology NAS: A photo storage and multimedia server for your home
Palace: Duterte unfazed by ICC probe on drug war killings
MOST READ
Sotto sees Sara, Pacquiao as ‘formidable competitors’ for president
Duterte to meet with Sotto, Velasco to discuss fate of BARMM polls
Opposition ‘must go beyond anti-Duterte platform’ in 2022 polls – Drilon
NCR Plus tourists of all ages can travel to MGCQ areas until June 30 — DOT
Don't miss out on the latest news and information.