LONDON – The British economy expanded by a solid quarterly rate of 0.5% in the first three months of the year as firms geared up for the long-anticipated Brexit date, official figures showed Friday.

Much of the growth reported by the Office for National Statistics appears to have been due to firms stockpiling raw materials and products ahead of Britain’s scheduled departure from the EU on March 29, a deadline that’s since been delayed to Oct. 31. 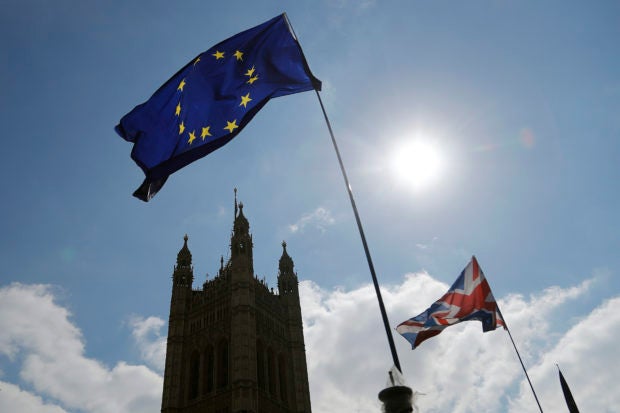 FILE – In this Thursday, April 11, 2019 file photo, protestor flags fly opposite the Houses of Parliament in London. The British economy is likely to weaken as firms stop ease up on Brexit preparations now that Britain’s departure from the European Union has been delayed by months, the Bank of England said Thursday, May 2, 2019. (AP Photo/Frank Augstein, File)

Overall growth, which was in line with most predictions, was up from 0.2% in the previous quarter.

Manufacturing output expanded by a hefty 2.2% during the quarter, a sign that businesses were doing what they could to prepare for the possibility that the country might crash out of the EU without a deal leading to new future trading relations.

There is evidence, including from the Bank of England, that executives were planning for the prospect that a “no-deal” Brexit would lead to tariffs being imposed on many goods and disruptions at ports.

The statistics agency did not provide details of the stockpiling boom but did acknowledge that it occurred.

It found widespread strength across the majority of manufacturing industries during the quarter, with the most notable growth occurring in the relatively volatile pharmaceuticals sector, which increased by 9.4%.

This growth, it said, was largely due to a pick-up in exports as well as some export strength in anticipation of Brexit.

After Parliament rejected the Brexit deal Prime Minister Theresa May negotiated with the EU, the Brexit date was extended by the other 27 countries in the EU.

As a result, economists expect growth to moderate in the second quarter as firms ease their stockpiling.

Uncertainty is likely to hobble the economy further in the months ahead with business investment widely anticipated to remain weak until clarity over Brexit emerges. That uncertainty helps explain why the British economy shrank by a monthly rate of 0.1% in March. /g