BackApp to the rescue 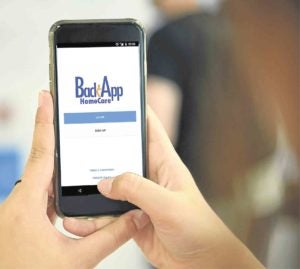 BackApp1
The app has been up and running in New York since 2017 and is being used mainly by nursing home facilities.

Those tasked with the burden of caring for their elderly and sick loved ones are aware of how hard it is to find good help—one who has the necessary medical expertise, such as a nurse, or at least one with proper caregiver training.

But now there’s a mobile app exactly for that, thanks to today’s technology: the recently launched BackApp, cocreated by New York-based company SLF Management Systems Inc., which was founded by Filipino nurses, and Japanese software development company Advanced World Solutions, Inc. (AWS), which has offices here in the Philippines.

The app has been up and running in New York since 2017 and is being used mainly by nursing home facilities, says Sally Nuñez, SLF Management Systems president.

Here in the Philippines, Nuñez says she and her cofounders saw the need for more home-based care services after she experienced difficulty finding someone who could provide reliable palliative home care for her late mother.

“I always describe [the app] like this: When all else fails, you have BackApp. Like when my mom was sick last year, I saw how hard it was to find help, and during her last few days, I wanted to give her the best care,” Nuñez says.

“The problem here is we have very few intensive care units in hospitals, so the best recourse was to convert our home into an ICU. I was eventually able to book a nurse and give my mom five comfortable days before she died,” she adds.

BackApp is the first mobile application developed by AWS, which was initially established in the country in 1993 as an offshore research and development arm of a joint venture between IBM Japan and Toshiba TEC.

AWS later became an independent company, establishing its head office in Japan. With more than 25 years in the business operating in the Philippines, Japan, China and the United States, it is the strategic partner of companies such as IBM Japan Ltd., Lenovo, Kyocera, Sumitomo Heavy Industries and Toshiba-TEC Corp.

“The app’s home care feature is truly revolutionary and very helpful to families here in the Philippines,” says Vincent Remo, AWS director and vice president for innovation and development. “Long-term care facilities here [in Metro Manila] are close to none, what more in far-flung provinces.”

Using BackApp is a four-step process: First, you log in, then input pertinent information about yourself and what you need, if you are the one in need of care, or the person who does. This includes one’s latest clinical diagnosis, which will be assessed by one of BackApp’s case managers, who will then do a home visit to fully understand a patient’s situation.

“Sometimes we think that we need a private nurse automatically, but it turns out, once your situation has been assessed, that all you need is a trained caregiver,” Nuñez says. “The case manager will also look at the patient’s support system to determine how many hours a private nurse or caregiver needs to work for that particular client.”

After the assessment, the case manager will then return to present to the patient and his or her family their options, as well as the total cost of the service. The fee will vary depending on the nurse’s or caregiver’s shift length, and the kind of work that needs to be done. His or her background and experience will also be taken into consideration.

Lea Batomalaque, SLF Management Systems vice president for marketing, says nurses and caregivers who will join their platform will be able to enjoy a flexible working schedule, since they will be the ones to dictate their availability.

The company is still building its network of nurses and caregivers here in the country, and expect that soon, patients will be able to fully avail themselves of BackApp’s services.