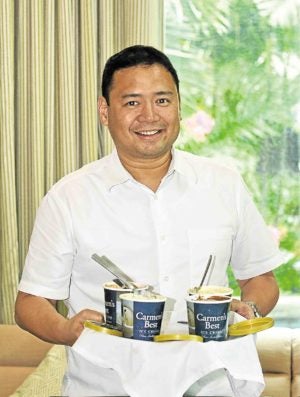 CEO Paco Magsaysay, who received the Agora Awards for Entrepreneurship in 2018, shares with us here his insights into how the right marketing mix helped Carmen’s

Q: What made you launch another ice cream brand in the Philippines?

A: My father, former Sen. Ramon Magsaysay Jr., and some of his friends decided

to put up a dairy farm in 2007.  This came about as the Philippines imports 99.6 percent

of its dairy needs, and they

to sell fresh milk in the local market.

In 2008, my father asked us to come in and help sell the fresh milk, of which there was a surplus. Since dairy cows have to be milked twice a day, and

we were not selling the fresh milk fast enough, there was a good amount of spoilage. As a result, we had to throw a lot of milk away.

In 2009, we incorporated a company called Carmen’s Best Dairy Products. We did this even if at the time, we still did not know yet how we were going to repurpose the fresh milk. We just knew we had a supply of fresh milk from our dairy farm to concoct products from such as flavored milk, yogurt, cheese and so on.

After deciding that making artisanal ice cream was the way to go and going through the R&D and production process, in February 2011, we started selling Carmen’s Best ice cream.

Since we were committed to using the fresh milk from our dairy farm, we were limited with the amount of ice cream we could make. This meant we could not come up with a “mass” produced product. We figured then that since we need to make our ice cream good, why not make it great?

It was this mind-set that shaped and continues to define Carmen’s Best day-to-day operations and plans. From this realization, we proceeded to design the best process to make the best ice cream, using the best ingredients.

From the outset, we were aware it was not practical to compete directly with the big ice cream manufacturers. Catering to a niche market was the wisest strategy to adopt. A discriminating sector could be counted on to seek out quality-made desserts.

the product or the target market of Carmen’s Best? How

was the market-product mix chosen?

A: The product came first as it was a product that was conceived to solve the issue of finding use for the surplus milk, thus avoiding having to dispose of it. The market just followed as many people just started to tell their friends and family about our product. They would share pictures of them enjoying Carmen’s Best on social media.

Q: Who were you intending as your initial target market? Was the profile of the customers according to your

plan or did it evolve? How has it changed, if it has changed

A: Our initial intention was just to sell around our village, Ayala Alabang. We were not looking to sell it outside of that area. But since beginning sales were slow, we decided to expand the distribution to outside our immediate environs.

Since then, we have encountered so many people who have tried Carmen’s Best, and we are encouraged to learn that it’s not only customers from the so-called A and B bracket who are buying our product. This is not to say that we have gone mainstream. We are still quite a niche product in terms of market penetration.

Q: Why did you name the ice cream after a person—Carmen, your only daughter?

A: We felt that the ice cream had to be “feminine.”  The company was named after my daughter, who was named

after my maternal grandmother, Carmencita Chuidian Delgado, whom we fondly called “Lola Cita.”

The appeal wouldn’t have been the same, we feel, had the ice cream been called “Paco’s Best.”

Q: What difficulties did you encounter in the beginning and how did you solve these challenges?

A: No one had heard of Carmen’s Best ice cream, which was expected since we were very new in the market in 2011.

To offset this, we visited people, knocked on a lot of doors and offered to let people try our different flavors. Taste tests were the only way to show how different we were from our competitors.

Of course, it was a tedious process. One person and one store at a time.

But there was no other way but to work tirelessly, even on weekends—especially on weekends when customers were looking to try out something new. Our formula has always been to work when no one is looking, when the competition is sleeping or just plain outworking everyone.

But that’s our personality makeup. We’re intense, which can be off putting in the Philippine setting. So, we try to diffuse this downside by smiling and cracking jokes endlessly.

It has worked so far! —CONTRIBUTED

Josiah Go is chair and chief innovation strategist of Mansmith and Fielders Inc. To read the full transcript, as well as his interviews with other thought leaders, follow him at www.josiahgo.com.