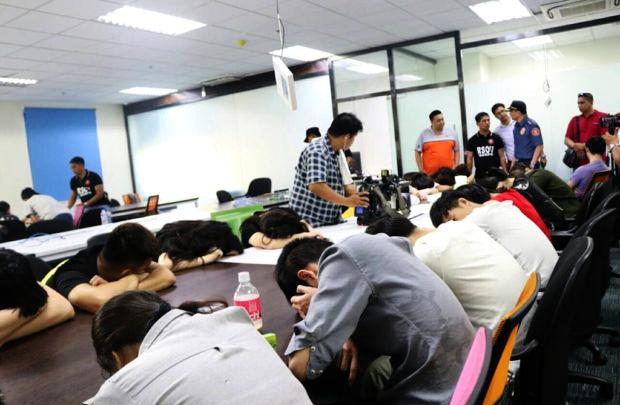 This photo, taken on Nov. 22, 2018, shows some of 104 individuals — 93 of them Chinese and 11 Filipinos — caught operating an illegal online gambling platform at the Ortigas Techno Point Building 2 in Pasig City. The operation was conducted by the Special Operation Unit of the National Capital Region Police Office. (File photo from the NCRPO)

BEIJING — The Philippines is finalizing new rules to weed out illegal foreign workers amid concerns over tax evasion and loss of job opportunities for Filipinos.

This developed as a thriving online gaming industry that requires proficiency in Mandarin has resulted in an influx of workers from mainland China, some of whom enter as tourists but stay longer to work for these Philippine offshore gaming operators (POGOs).

“We already had three meetings and we are finalizing the new process for the issuance of SWP as well as AEP. It should be coming out anytime,” Bello told reporters in a chance interview on the sidelines of China’s Belt and Road Forum on Saturday.

The new rules will require foreign workers to obtain a tax identification number (TIN) before they can get the AEP from the Department of Labor and Employment (DOLE), Bello said. This is to ensure that they would pay the appropriate taxes, addressing concerns on tax leakage raised by Finance Secretary Carlos Dominguez III, who initiated the creation of this inter-agency committee.

The new framework will also clarify the list of jobs in the Philippines that are open to foreigners.

Most POGO workers are Chinese nationals who can work legally provided they obtain an AEP — which is good for two years — from DOLE.

“We give an AEP to any foreigner if the work that they will do in the Philippines can not be done by Filipinos or if it can be done but no Filipino would want to do it,” Bello explained.

On the other hand, the SWP is good for three months and renewable for three more. It is given to foreigners for short-term work or gig, for instance, perform in a concert. Beyond the maximum period of six months, a foreigner must get an AEP to stay longer.

Aside from DOLE and the Department Finance, the inter-agency committee also includes the Bureau of Immigration, Bureau of Internal Revenue, Department of Foreign Affairs, Department of Justice and the Philippine Amusement and Gaming Corp., which regulates POGOs.

Illegal foreign workers indeed become an “easy” prey to manipulators, Bello said, when asked about concerns in Beijing on incidents of human trafficking, kidnapping and even killing of Chinese citizens.

Bello said there had indeed been an influx of Chinese workers in the Philippines because of POGOs as well as businesses working in special economic zones.

The issues hounding Chinese POGO workers were not raised during the bilateral meetings between President Rodrigo Duterte and China President Xi Jinping, but they were previously tackled with Chinese authorities in other meetings, Bello said.

Citing an estimate from the immigration bureau, Bello said there are 164,000 foreigners with valid SWPs in the Philippines. For its part, DOLE has issued 58,000 AEPs to foreigners in various fields and of various nationalities.

Bello shrugged off concerns, however, that Chinese construction workers were likewise crowding out the market.

“We we will never allow any foreigner to work in the Philippines if the work is that of a construction worker. It can be done by Filipinos,” Bello said.

In an inspection made last week, Bello said the DOLE had apprehended 49 illegal foreign workers.

DOLE is constrained, however, by lack of manpower and insufficient powers to address the problem of illegal workers. When it apprehends illegal foreign workers, Bello said his department could only advise these people to apply for AEPs or if they refuse, refer to the Bureau of Immigration for deportation or blacklisting.

The penalty is also very low, at only P10,000 per illegal worker, he said, adding that the penalty should be at least P100,000 to be a more effective deterrent.

“In the meantime, employers go scot free so what Congress should do is give DOLE authority to either suspend or cancel the license of any employer hiring illegal workers,” he said.

“DOLE should be given enough teeth to be able to bite,” he added.

Bello also lamented that while DOLE was supposed to inspect all companies for labor law compliance, it had only 800 inspectors covering about 900,000 business establishments nationwide.

“I’ve been asking Congress or even DBM [Department of Budget and Management] to give us 5,000 [inspectors],” Bello said.