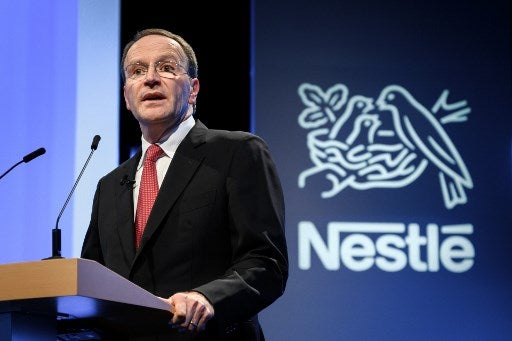 ZURICH, Switzerland — Swiss food giant Nestle said Thursday its sales have climbed, boosted by recent acquisitions including the right to market Starbucks coffee products in supermarkets around the world.

Despite the overall climate of stagnant consumer spending in industrialized countries and a slowdown in growth in emerging markets, Nestle reported a 4.3 percent rise in sales in the first quarter of this year to 22.2 million Swiss francs ($22 billion, 19.4 billion euros).

Recent acquisitions accounted for 1.2 percentage points of that increase.

In recent years, the company has been under intense shareholder pressure to boost sales and profitability, and has been shaking up its portfolio that includes over 2,000 brands, including household names such as Gerber’s baby food, Perrier sparkling water and Haagen-Dazs ice cream in addition to its eponymous chocolate.

Nestle, which owns the Nespresso capsule and Nescafe instant coffee brands, has made coffee a key priority in its growth strategy, including the $7 billion acquisition last August of the rights to market Starbucks coffee outside of the chain’s cafes.

The group has in particular sought to expand its coffee presence in the United States, where it has bought a majority stake in California-based high-end brand Blue Bottle Coffee and acquired Texan brand Chameleon Cold Brew.

Chief Executive Mark Schneider highlighted the launch of a new range of 24 premium coffee products under the Starbucks during the quarter.

“The Nestle and Starbucks teams did an outstanding job and developed these products in just six months,” he said, adding that the company’s increased speed and innovation “are clearly paying off”.

The company confirmed its forecast for higher sales on a like-for-like basis and bigger operating profit margins this year.

The Swiss group wasn not completely impervious to the sluggishness in consumer spending, being able to increase its sales prices by only 1.2 percent in the quarter. /ee

Read Next
Pinterest prices IPO at $19 to begin trading Thursday
LATEST STORIES
Jaja Santiago powers Japanese squad to semis stint
Neda seeks Congress OK of key economic bills before solons get busy for 2022 polls
Hotdog bassist Dennis Garcia remembered by daughter after his death: ‘Glad I have your songs’
House to hold crucial session in Batangas on Jan. 22
‘A greener, cleaner tomorrow’: A how-to guide for Filipinos who want to help with today’s energy crisis
MOST READ
Motorcycle taxis ‘illegal’ starting next week — LTFRB board member
Palace: Crisis over ABS-CBN franchise unlikely
Marcos monument beside Aquino’s stirs Tarlac town
Panelo: Duterte only wants to emulate strong political will of Marcos
Don't miss out on the latest news and information.