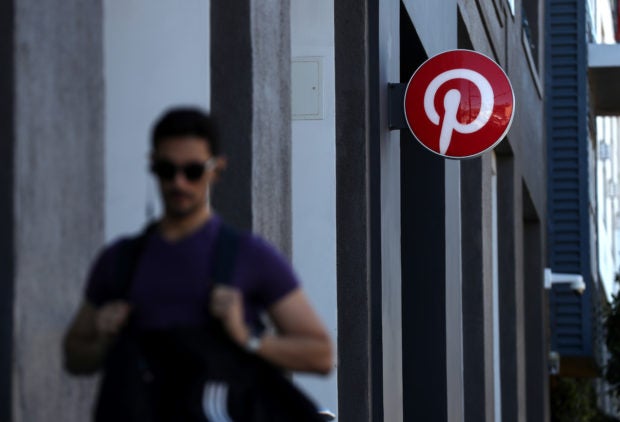 A pedestrian walks by the Pinterest headquarters on April 09, 2019 in San Francisco, California. AFP

SAN FRANCISCO — Pinterest on Wednesday announced it would price its initial public offering at $19 a share to begin trading on Wall Street the following day.

The online bulletin board popular among women is offering 75 million shares on the New York Stock Exchange with 11.25 million extra if required, raising between $1.4 and $1.6 billion, and will trade under the symbol “PINS.”

Did we tell you about tomorrow? pic.twitter.com/wHq2lgmC0z

At $19, the introductory price is above the range $15-$17 that was predicted and which valued the company at $11 billion.

It comes in the wake of a lackluster market debut for ride-sharing platform Lyft, which began trading in March at $72 and closed at $59.51 on Wednesday.

Pinterest, which claims 250 million users, unveiled its plans to enter the stock market last month, one of the many tech startups to go the IPO route this year, after Lyft and before the expected entries of Uber, Airbnb, and Slack.

Pinterest said it had a turnover of $755.9 million in 2018, just under twice the 2017 fiscal year, and a net loss of almost $68 million, down to about half the figure for the year before.

Launched in 2010, Pinterest is a virtual bulletin board platform, with users decorating their boards with pictures showcasing interests including food, fashion, travel and lifestyle.

It allows users to share such images, although it does not call itself a social network. It also enables users to link to online shopping and other services to find items they have “pinned.”