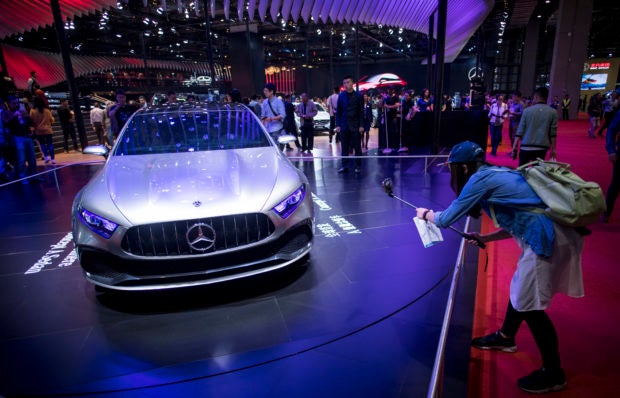 Visitors look at a concept sedan A car from German carmaker Mercedes during the public day for the 17th Shanghai International Automobile Industry Exhibition in Shanghai on April 24, 2017. AFP FILE PHOTO

Fuelled by rising incomes and government sales incentives, China has been the golden goose upon which the global automotive industry has staked its future.

But after years of strong growth, car sales fell last year for the first time since the 1990s, hit by a slowing economy, US trade tension, and a Chinese crackdown on shady credit practices that has crimped car-financing channels.

Sales dipped 2.8 percent in 2018 to 28.1 million units, according to that China Association of Automobile Manufacturers (CAAM), a pace that has accelerated in recent months.

“This is the first time since the takeoff of the Chinese market that there has been such a long and sharp decline in sales,” said Laurent Petizon, an auto analyst at Alix Partners.

“We are starting to worry a little bit. It’s a new phenomenon.”

The decline is magnified by a prior buying rush as consumers moved to beat the government’s recent removal of tax rebates for small car purchases.

Major carmakers still see solid potential, particularly in bright spots such as SUVs and electric vehicles, which will account for many of the new models on display in Shanghai.

But cut-throat competition is expected to intensify even in EVs with Beijing moving to phase out policies that encourage the purchase of “green” vehicles.

This mixed picture — optimism combined with worrying new realities — is reflected in the plans of carmakers like Ford.

The US manufacturer this month announced plans to launch 30 new models in China within three years, a dozen electric.

But it also unveiled a strategy to cater more directly to the evolving needs of Chinese car buyers.

Although China is the world’s largest “new energy” vehicle market and sales soared 62 percent last year, they remain a drop in the China bucket with 1.3 million units sold, thanks in part to purchasing incentives.

But they represent the future for China, especially with the government planning to impose quotes requiring carmakers maintain a certain percentage of new energy vehicles in their Chinese production.

This has given rise to a number of Chinese EV start-ups seeking to stake out territory that will have to face off against the likes of Tesla.

The California automaker, widely seen as the EV standard-setter, is putting more eggs in China’s basket.

Tesla chief Elon Musk broke ground in January on a factory in Shanghai — the company’s biggest overseas move yet.

The new plant will eventually have an annual production capacity of 500,000 vehicles, dramatically increasing Tesla’s output.

Tesla’s planned factory is believed to be the first to take advantage of this.

Regardless of short-term jockeying for position, China will remain a crucial market, particularly in electrics, said Ferdinand Dudenhoeffer, director of the Germany-based Center of Automotive Research.

“The situation will slowly improve. Next year, the market will recover little by little and in three to four years, will have resumed its earlier growth,” he said.

On the Road to Make an Affordable Car, Tesla Cuts Jobs

COVID-19 screening checkpoints remain for those going to Boracay