Nissan ex-chair Ghosn says a ‘conspiracy’ led to his arrest 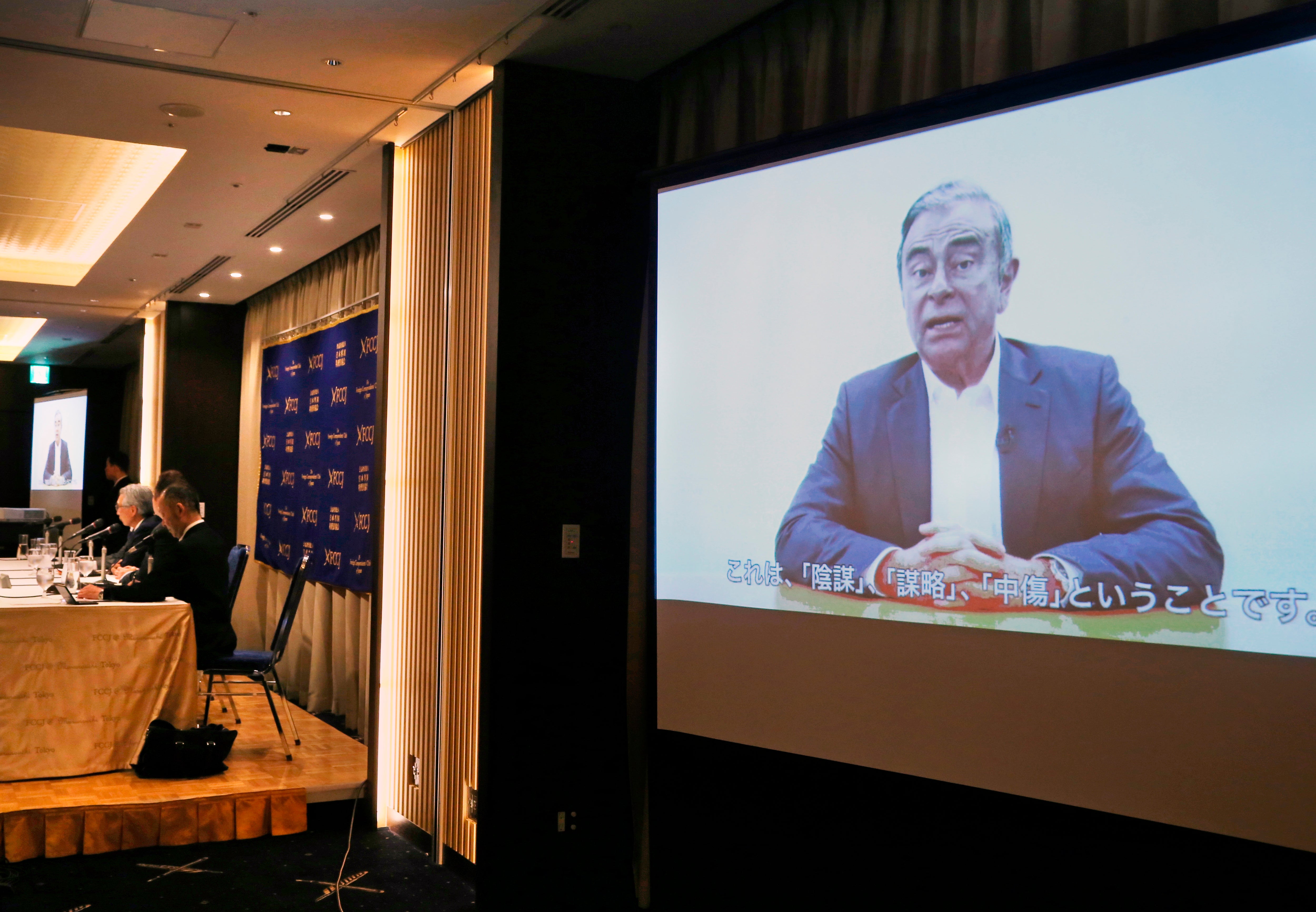 Former Nissan chairman Carlos Ghosn, seen on a screen, speaks in a video during a press conference held by his lawyers in Tokyo, Tuesday, April 9, 2019. Ghosn, who was arrested in Japan on financial misconduct charges, gets his say in a video shown by his legal team. (AP Photo/Koji Sasahara)

TOKYO — Nissan’s former Chairman Carlos Ghosn maintained his innocence in a video released by his legal team Tuesday and accused some executives at the Japanese automaker of “conspiracy” that led to his arrest on financial misconduct allegations.

“The first message is that I’m innocent,” said Ghosn, wearing a white shirt and dark jacket and speaking calmly in the nearly 10-minute video shown at the Foreign Correspondents’ Club in Tokyo.

His lawyer Junichiro Hironaka said the video was prepared in case Ghosn was not able to speak at a news conference planned for Thursday. He was arrested last week while out on bail, and remains at Tokyo Detention Center.

Ghosn said the executives behind the conspiracy were motivated by what he called “selfish fears,” including about what they saw as a merger with French alliance partner Renault SA.

They mistook his leadership for greed and dictatorship, when he was the biggest defender of Nissan’s autonomy, he also said.

Ghosn further said he was worried about Nissan, wondering whether those executives were really watching out for the company.

Hironaka said a section of the video in which Ghosn named names was removed on his legal advice.

Nissan Motor Co., while declining to comment on the criminal case, has said an internal investigation has found that Ghosn falsified financial documents to under-report compensation, and that he used Nissan money for personal gain.

Ghosn’s fourth arrest was on a fresh breach of trust allegation based on suspicion that payments from a Nissan subsidiary to an Oman dealership were diverted to a company effectively run by Ghosn.

On Monday, Nissan Motor Co. shareholders voted to oust Ghosn from its board and to approve the appointment of French alliance partner Renault SA’s Chairman Jean-Dominique Senard as Ghosn’s replacement. Renault owns 43 percent of Nissan.

Yokohama-based Nissan, which makes the Leaf electric car, March subcompact, and Infiniti luxury models, was on the brink of bankruptcy when Renault sent Ghosn to turn it around two decades ago.

Ghosn stressed he devoted 20 years to Nissan, and he was worried about its future.

“I love Japan and I love Nissan,” he said in his video, adding proudly the company had achieved much under his leadership.

He appeared to be saying he was the best leader for Nissan, while those behind the alleged conspiracy were failing.

“It’s sad. For someone like me, it’s sickening,” he said.

Hironaka said he will appeal Ghosn’s latest detention and would appeal to the Supreme Court about his new arrest. Multiple arrests and prolonged detentions are routine in Japan’s criminal justice system, but an arrest after someone is released on bail is unusual.

Prosecutors said the latest allegation is different, and there is risk Ghosn may tamper with evidence. His defense team said the allegations are related, and authorities have already seized all the documents.

Ghosn’s detention, following his latest arrest, was approved through Sunday but could be extended.

“The company’s focus remains on addressing weaknesses in governance that enabled this misconduct,” he added.

The date of Ghosn’s trial has not been set. /kga