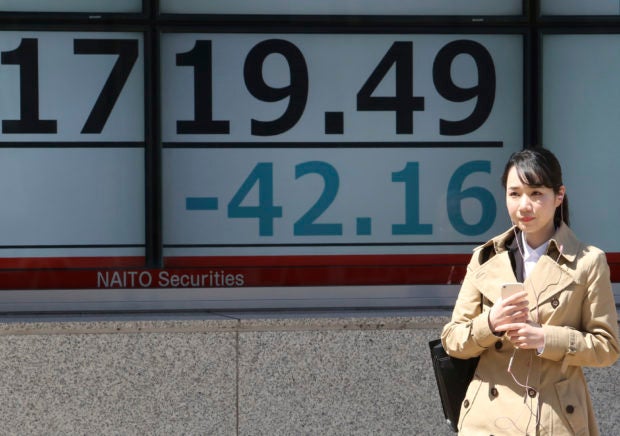 A woman stands by an electronic stock board of a securities firm in Tokyo, Tuesday, April 9, 2019. Asian markets have followed Wall Street higher as investors watched for Brexit developments and corporate earnings. Benchmarks in Shanghai, Hong Kong and Seoul gained, while Tokyo was flat. (AP Photo/Koji Sasahara)

On Wall Street, the benchmark Standard &amp; Poor’s 500 index eked out a 0.1% gain to extend its winning to streak to eight days, its longest in 18 months.

The Dow Jones Industrial Average ended lower due to another big loss for Boeing Co.

Investors looked ahead to developments in Britain’s contentious move toward leaving the European Union, a mid-week meeting by the European Central Bank and the release of minutes from the latest U.S. Federal Reserve meeting.

British Prime Minister Theresa May plans to meet European leaders ahead of a Friday deadline for Britain to leave the European Union.

British legislators have yet to agree to terms for the divorce from the trade bloc. Economists worry about the drag on the economy if the departure happens without that.

Boeing slumped 4.4% after saying Friday that it will cut production of its 737 Max plane. Regulators around the world grounded that model after it was involved in two fatal crashes.

EARNINGS SEASON: The latest quarterly earnings season is due to start with JPMorgan Chase and other big banks. Analysts are forecasting the first drop in S&amp;P 500 profits in years. They expect corporate profit growth to resume after the weak first quarter.

CHINA-US TRADE: China’s official news agency said talks in Washington last week “achieved new progress” but did not say when further discussions will happen. Beijing and Washington are trying to end a tariff war over Beijing’s technology ambitions that has shaken financial markets and darkened the world economic outlook.